BACK TO ALL NEWS
Currently reading: Jeep's new Qashqai rival on test
UP NEXT
Nissan will build batteries in UK to sustain Sunderland plant

Based on an enlarged version of the Renegade platform, the new SUV will arrive in both Jeep and Fiat forms later next year.
Share
Open gallery
Close
Share story

This chopped-up engineering mule is the first evidence of the new Qashqai-rivalling Jeep SUV.

As Autocar revealed in March, Fiat Chrysler has hatched plans to build a pair of mid-size SUVs to take advantage of the booming global market for these vehicles.

Both Jeep and Fiat will sell a version of the new model, with the Jeep replacing today’s Compass and Patriot models (which are not sold in Europe) as well placing Jeep in the heart of the one of the most profitable new car segments.

Mike Manley, Jeep’s global boss, told Autocar earlier this year that while the brand sold a million vehicles in 2014, only 8% of the total was in Europe.

With sales of the new Renegade settling down at a rate that should see the company sell between 50,000 and 60,000 units in Europe during 2015, the bigger model should do at least as well. Manley suggested that this new model could be on sale by the end 2016.

Fiat’s version of the new SUV is expected to have similar styling cues to the new 500X and could be badged 500XL.

As can be seen from these spyshots, the new platform for these cars is adapted from the architecture that already underpins the smaller 500X and Renegade.

Autocar understands that around 10cm extra space has been inserted into the rear footwell of the new platform. This should stretch the wheelbase of the new models by around 100mm to give a similar length wheelbase to the new Qashqai at 2.65m.

The front and rear tracks have also been slightly widened. The final production models will also have a longer rear overhang, significantly increasing boot space.

The transmission system is expected to be carried across to these new models with very few changes. That means it will get struts at each corner and as multi-link rear suspension.

All-wheel drive models will get the excellent GKN switchable four-wheel drive transmission (which, unlike the more common Haldex set-up, doesn’t use a clutch pack to activate the rear wheels) and the option of the nine-speed autobox.

It’s thought that the smaller 110bhp 1.6-litre E-torQ engine will not be offered in this bigger SUV, leaving a choice of the 140 and 170bhp MultiAir II turbo petrol engines. 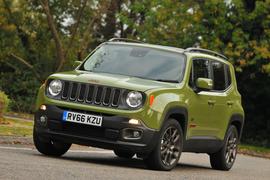 God that is UGLY. The designers obviously took their inspiration from a house brick and stuck wheeels on it
Citytiger 1 June 2015

One thing that is fairly certain,

Its brick ugly, will remain unreliable, cheap and manage to give people considering hopefully time to put their brains in order
View all comments (5)