BACK TO ALL NEWS
Currently reading: Live from Pikes Peak 2013: "Loeb is unbeatable"
UP NEXT
Niels van Roij Design unveils tribute to Ferrari 'Breadvan'

Sébastien Loeb is on track to a race time that could set a new benchmark for the event, according to his closest rival
Share
Open gallery
Close
Share story
News
by
2 mins read

As the racers close in on race day tomorrow, the teams are making the final preparations for the final do-or-die run at Pikes Peak.

The Unlimited class, which counts Sébastien Loeb, Romain Dumas and Rhys Millen among the competitors, took to the top section of the course. Loeb leads the pack in his Peugeot 208 T16 with a time of 2m11s. With engine gremlins fixed, Millen ran his Hyundai Genesis to second-best 2m27s, beating Dumas by .31s. The Monster Mini of Jean-Philippe Dayraut recorded a best time of at 2:33.

The gap between Loeb and Millen prompted last year’s winner to suggest a hot run by Loeb tomorrow could become unbeatable. He told Caradvice that he couldn’t beat Loeb. “Not on this road, not in this car. If they have a good run on Sunday you will never see that record fall again,” he said.

Autocar will be reporting from the event throughout the weekend, so stay tuned for the latest from Pikes Peak.

You can also watch short videos of several of the competitors on Autocar's YouTube channel. 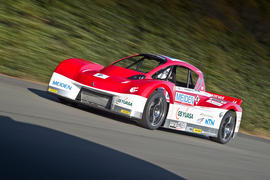