It may be small, but that doesn't mean it's safe from attack
Share
Open gallery
Close
Share story
News
by Melanie Falconer
2 mins read

How on earth do you hit a Smart? Apparently, quite easily.

Yes, ours is now sporting a long, rather ugly scrape on the nearside of the rear bumper, complete with the light-coloured paint of its attacker. Luckily, there’s only the tiniest of marks on the exposed silver Tridion safety cell next to it, so hopefully that can remedied with a rubdown and some touch-up paint.

With the Smart being a city car, I suppose it’s inevitable it’ll get dinged, especially in public car parks such as where this offence took place. I guess the car’s minuscule size actually counts against it, because some drivers simply don’t see it in time. Still, the sheer selfishness of the driver in question has made me investigate to see if CCTV footage of the incident is available, if only to make said driver stop to think of the consequences of his/her actions. Looking at the damage, I believe the driver must have known there was contact with my car.

That drama aside, I’ve been enjoying life with the Smart. The best way to drive it in town is to stick it in Sport mode, then push the gearlever to the right when in Drive to engage the auto ’box’s manual shifting. It’s respectably nippy and the auto’s responses are much snappier.

The Fortwo is also surprisingly practical by city car standards. The 260-litre boot is supplemented by a 100-litre compartment that’s hidden in the lower part of the split tailgate and is useful for smaller items I don’t want rolling around the boot. No load lip and a flat floor are convenient, too.

Some people aren’t fans of a split tailgate, but I like the one on the Fortwo. Even when there’s a car parked very close behind, I can still easily access the boot. And the lower section can take up to a claimed 100kg when it’s folded down, so it’s really handy for perching awkward items on, such as heavy shopping or my saxophone case, when loading and unloading. 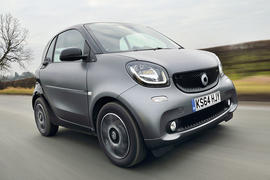 Is that right 37.5 mpg, pretty shocking for a tiny,light 2 door. Remember we're not talking about a car used solely in a city the size of London
TS7 12 October 2016

Is that right 37.5 mpg, pretty shocking for a tiny,light 2 door. Remember we're not talking about a car used solely in a city the size of London

Indeed, quite shocking in fact, particularly given the last paragraph in the 1st report:

However, when I do brim the Fortwo again, I’d be surprised if I get near the official claimed average combined 68.9mpg figure. The claimed urban figure is a slightly more realistic 56.5mpg, so we’ll see.

Although not as tight of turning circle as the Smart, my runabout car (ok, only 74 bhp) Up! seldom dips below 50 mpg in town. I think the worst I've seen whilst scooting around, well stuck in traffic jams, car-hating Oxford has been ~43 mpg. I'm sure most other, rather more practical (4 or 5 seats), city cars of the Up!'s ilk are the same.

Although not as tight of turning circle as the Smart, my runabout car (ok, only 74 bhp) Up! seldom dips below 50 mpg in town.

That isn't quite a fair comparison. You're comparing a N/A car, with a turbo, and we all know how they small turbo engines aren't getting close to their official figures. You would be better comparing the 71bhp fortwo. Plus, the fortwo isn't half a car just because it is a two seater.