BACK TO ALL NEWS
Currently reading: New tech for updated Chevrolet Cruze
UP NEXT
Shame to Lusso you: A eulogy to the last four-seat Ferrari GT

The updated Chevrolet Cruze saloon has made its debut at the New York Motor Show today. The focus of the revised model is on exterior styling and technology.

The biggest Cruze news, however, comes with its connectivity. A seven-inch color touchscreen is standard in the USA, as is voice recognition and a 4G LTE wireless connection with a wi-fi hotspot. Enhanced Bluetooth integration features text message alerts. The newest Cruze also offers Apple’s Siri Eyes Free, for full voice control of a connected iPhone. Chevrolet’s App Store allows owners to download weather, news, travel, and other information.

Two petrol engines - a 1.8-litre and a turbocharged four-cylinder in-line 1.4-litre unit - as well as a 2.0-litre diesel engine carry over in the US market. There's no confirmation of specific changes to the two 1.7-litre diesel engines presently offered on Cruze models in UK.

Chevrolet has sold more than 2.5 million Cruze models worldwide since its launch in 2010, making it their best-selling model. The revised 2015 version goes on sale later this year. However, company officials have confirmed the new model will not go on sale in the UK, due to Chevrolet's plans to pull out of Europe by 2015. 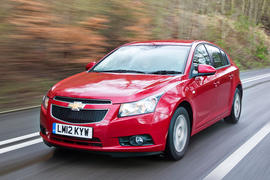 We maybe won't get this is Europe

But we already get most of the dashboard in the Astra...
Moparman 14 April 2014

With the current recalls going on at GM over the ignition issues from the old J-body cars they are going to need a lot of good PR to continue sales in the short term. Though I do wonder if the fact the government is coming down hard on Toyota at the same time wasn't something that was done to soften the impact of what is going on at GM.
MrJ 14 April 2014

Blimey, that revised snout takes a bit of getting used to. Still can't fathom why GM insists on the split grille, with the bow tie sitting awkwardly across the middle.
View all comments (4)