BACK TO ALL NEWS
Currently reading: Updated 2023 Toyota Corolla is more powerful and efficient
UP NEXT
Geneva motor show axed for fourth consecutive year

Toyota has updated the Corolla, three years on from its launch, with a raft of specification, design and mechanical improvements - most notably ushering in the latest generation of its petrol-electric hybrid drivetrain.

The Toyota Corolla has sold more than 50 million units worldwide since its 1966 introduction and is currently in its 12th generation. It is available in both hatchback and estate forms in the UK, the saloon having bowed out several months ago. A closely related SUV model, the new Toyota Corolla Cross, will join it in dealerships later this year.

The Vauxhall Astra rival's design has been left largely untouched – tweaks are limited to a new mesh pattern for the front grille, reshaped foglights and new alloy wheel designs – but Toyota draws attention to the changes underneath the surface, which it says make it "equipped to strengthen its role as a core volume model for Toyota in Europe".

It continues to be available with a choice of 1.8- and 2.0-litre hybrid powertrains, but both are claimed to bring improved power, performance and drivability - alongside reduced emissions. 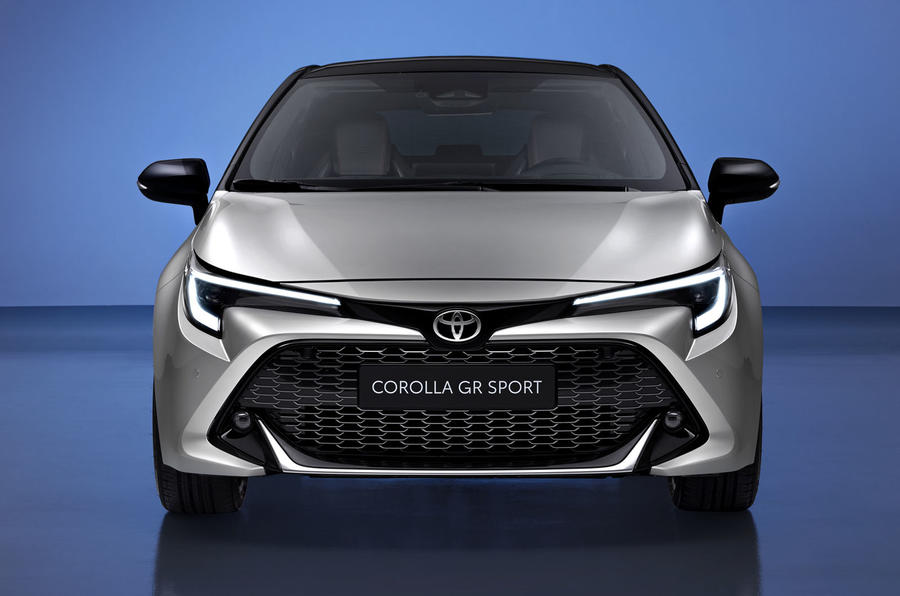 The lithium ion EV battery, for example, now weighs 18kg less and is more compact, and recalibrated EV motors give a more 'intuitive', rather than linear, throttle response.

Inside, the latest Corolla plays host to a new infotainment system running through a larger, 10.5in central touchscreen, and from mid-rung trim upwards, the hatch comes equipped as standard with a 12.3in digital gauge cluster.

Elsewhere, there is a choice of new exterior paint options and interior trim elements, while the performance-inspired Toyota Corolla GR Sport gets a new set of 18in alloys, tweaked bumper designs and GR-embossed seats.

Toyota will reveal pricing for the new-look line-up ahead of its market launch in the first quarter of 2023.

I ordered a 2.0 last October, still waiting for it, as my next company car. Only went for the 2.0 as the 1.8 is so gutless. Seems like a decent upgrade for the 1.8 where I would now consider it if I was offered it.

The upgrade to the 1.8 hybrid is significant. It always felt quite gutless on the open road but the extra power should really help. Plus it means you don't necessarily have to upgrade to the 2.0 which is both more expensive and has a notably smaller boot. Also, is the lithium ion battery new? I thought it was a nickel metal hydride in the pre-facelift model. Quite a significant change for Toyota if so.

Those engines are overstressed Turbo's this engine is a normally aspirated Atkinson cycle (designed for efficiency rather than performance) many advanced features including dual injection so no fouled valves ( as D.I. Turbo's) coupled with the motor which makes up for the lack of output this engine  will easy outlast any pint pot turbo ask any Prius owner.

Andrew1 2 June 2022
Right, then I'll take a 1.5l diesel which will outlast this while still being more powerful and torque.
Sorry, but the Prius hybrid tech might have been good at some point, but it's pointless today.
si73 2 June 2022
Why do you think a diesel will outlast this? Toyotas hybrid system is proven reliable, not sure I can say the same of diesels, yes a diesel may well be more torque rich but chances are it'll pollute more and be less efficient for town use. A hybrid still makes sense as a family car that's used daily in town and can still go long distances economically.
Horses for courses surely, if you do mega miles then a diesel is still king, same if you tow, but for most other uses, these hybrids have a lot to offer.
Andrew1 2 June 2022
I agree with you, hybrids make sense and still have a lot to offer. Just not this particular one.
The Apprentice 2 June 2022

There are 1.0 and 1.2 engines more powerful and lighter than this improved 1.8. Pointless.

Not sure any can do such low CO2 hence low BIK or MPG the Toyota (real world) can for its size though. These things matter a lot in fleet market.

Seeing as you seem to like numbers, how's this for you? A 1.0 155bhp Ford Focus hatch takes 9.2 seconds to reach 62mph. Exactly the same as this 138bhp 1.8 Corolla. All while using more fuel and without the Toyota's reliability.

Only the 2.0 is the nickel battery. 1.8 already uses lithium ion