From £59,5207
Entry-level GLE offers a smart, roomy interior, but seems to suffer for not having the E-Active air suspension
Open gallery
Close

The fourth-generation Mercedes-Benz GLE made quite the impression when we first tested it in the US last year.

You see, it seemed to offer all the features you’d expect from a large, posh SUV: a swanky, leather-upholstered interior; a smooth, punchy powertrain; a sublime ride and size-defying handling courtesy of its trick new E-Active air suspension system, and a range of clever new driver aids that are yet to appear on the Mercedes-Benz S-Class. Combined, this saw the GLE 450 scoop four-and-a-half stars. That isn’t a bad innings by any measure.

Now, though, the GLE has touched down in Britain, and it’s the entry-level 300d variant that’s going under the microscope. This means there are a few crucial differences between this car and the one we drove across the pond in late 2018.

Chiefly, the high-tech, silky smooth EQ-boost 3.0-litre six-cylinder petrol engine has been swapped out for a much less sophisticated (at least on paper) four-cylinder diesel. It also means there’s no air suspension. Well, there shouldn’t be; for some reason our early production test model had Mercedes’ regular Airmatic suspension architecture added back in, despite the fact this won’t be an option for UK GLE 300d customers. Odd.

Anyway, back to that engine. It’s the 2.0-litre unit that features in practically any Mercedes model you’d care to mention, and under the bonnet of the GLE 300d it develops a respectable-enough 242bhp and 369lb ft of torque. A nine-speed automatic transmission deploys all this to all four wheels. 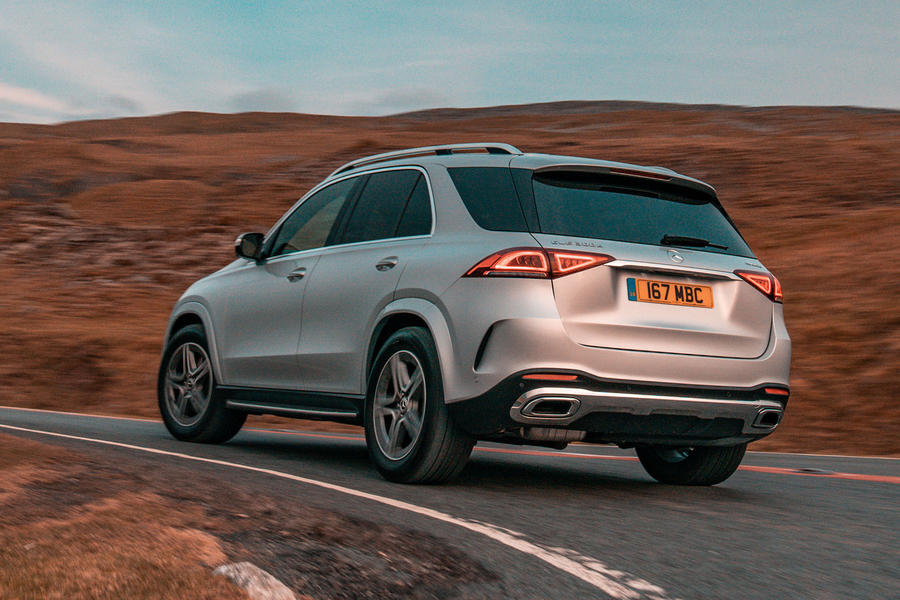 That engine lends what is now quite a large SUV (it’s just under 5m long, and weighs close to 2.2 tonnes) a decent amount of shove. Mercedes claims a 0-62mph time of 7.2sec, which puts it into warm hatch territory in terms of straight line pace. While we’re unable to verify those claims this time around, it certainly didn’t feel like a slouch out on the road.

The only trouble is that it’s not quite as refined as you might hope. There’s a noticeably agrarian edge to its soundtrack under an open throttle, and it begins to feel and sound strained rather early on in the accelerative process. Perhaps the forthcoming GLE 350d, with its two additional cylinders, will better fit the mould of an upmarket SUV in this respect. We’ll have to wait and see.

The nine-speed ‘box can be a touch difficult to get along with at times, too. Step-off is generally smooth provided you don’t have all the delicacy of an elephant, and the manner in which it shuffles between ratios while you’re on the move is slick enough. But it can be overly keen to hold on to gears at times - even when you’re not in Sport mode - meaning you’ll be subjected to that slightly rough-edged diesel soundtrack a bit more often than you might like. It’s prone to being caught out when pulling away from low speeds, too, where there’s a moment’s hesitation, before it shunts its chosen gear in and takes off.

Our GLE didn’t come with the super-sophisticated E-Active air suspension we experienced on that original launch. Instead, Mercedes’ AirMatic set-up replaced the standard coil-spring arrangement that should have featured. Rather disappointingly, it didn’t seem to strike the same balance between handling panache and genteel ride refinement as the GLE 450 we drove Stateside did.

It’s certainly comfortable around town and on the motorway, and it does a reasonable job of rounding off those sharper secondary intrusions caused by potholes, expansion joints and the like. The fairly chunky sidewalls of the 275-section tyres the 20in alloys were wrapped in likely helped out in this regard. Move onto faster, lumpier A-roads, though, and its overly soft set-up leads to some rather pronounced body movement. Uniform undulations are ironed out in a smooth enough fashion, but more irregular surfaces (the sort you’re more likely to find here in Britain) can generate some unwelcome head toss. Switching to Sport mode better ties things down, but seems to take things a touch too far in the other direction, compromising some of the pliancy it exhibits on smoother stretches of Tarmac. A setting somewhere between Comfort and Sport would probably be the Goldilocks zone, I reckon.

It doesn’t really mask its mass through corners as well as I’d hoped it might, either. It’s a shade too roly-poly to really encourage any properly sporty driving, and its overly light, muted steering rack doesn’t leave much of an impression either. Sport mode supposedly brings a bit more weight here, but the difference is minor at best. That said, the inclusion of Mercedes’ 4Matic all-wheel-drive architecture does mean it grips well on a balanced throttle. It will begin to understeer if you begin to get too apeish with your corner speeds, but the manner in which its front end starts edging outwards is delicate and predictable. It’s dynamic manners are best described as safe, rather than anything approaching exciting. 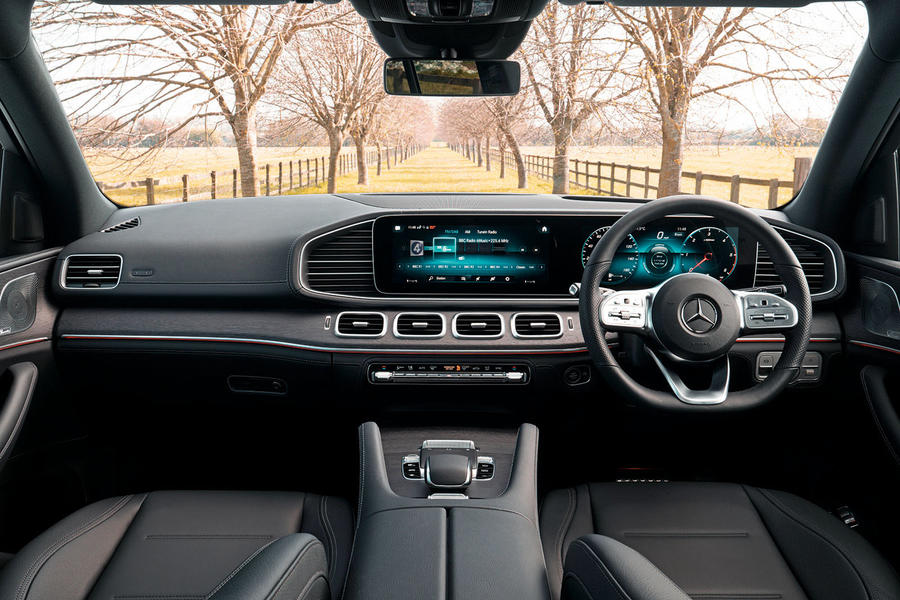 One of the GLE’s strong suits is its cabin, which is impressively roomy, and for the most part well finished. The square air vents in the centre of the dash are a smart new design touch, while the MBUX infotainment system and digital cockpit (both of which use 12.3in screens as standard) work well and really look the part.

There’s a problem, though. At £55,685, it seems rather pricey for what it is. A BMW X5 xDrive30d is only £1,800 or so more expensive, and that car gets Munich’s really rather lovely 3.0-litre six-cylinder turbodiesel as standard. And air suspension. It’s a car that feels so much more resolute than the Mercedes - not just in the way it rides, but the manner in which it hustles itself down a twisty road, too.

It’s tricky to give this particular GLE the nod then. It’s not quite composed or demure enough to truly impress, and it lacks the handling smarts of the X5. It’s well finished and spacious for sure, but a bit forgettable everywhere else. 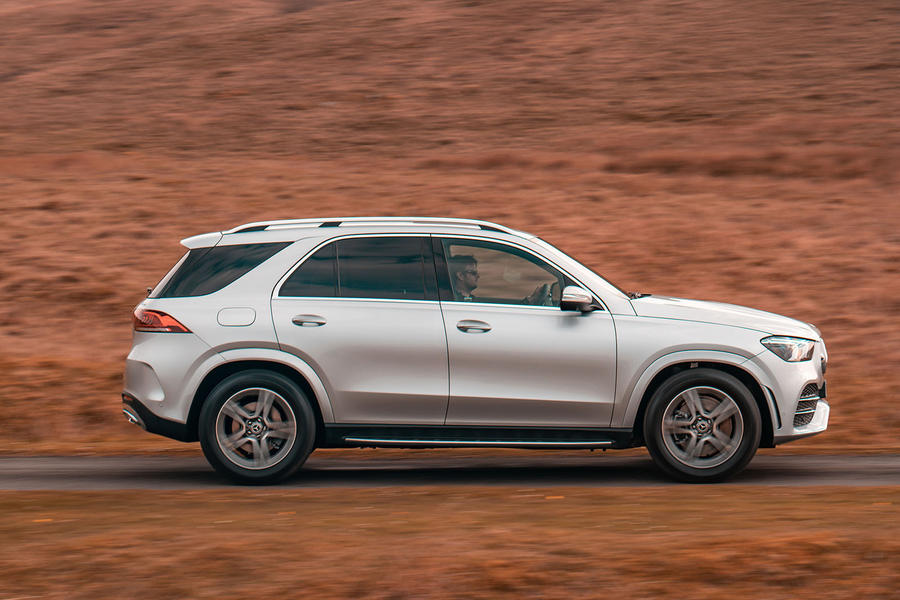 I know - in the past - MB has supplied engines and transmissions (technology), to Ssangyong.

What I would like to know is, did MB buy/obtain the tooling from Ssangyong, to produce that bodyshell?!

I know - in the past - MB has supplied engines and transmissions (technology), to Ssangyong. What I would like to know is, did MB buy/obtain the tooling from Ssangyong, to produce that bodyshell?!

Gorden Wagener, Mercedes's current chief designer, must have a phobia of straight lines and sharp edges. So even this boxy GLE has to have all edges smoothed out, even the dashboard air-vents suffer from the same treatment. The result takes away any sense of tautness and the ill-definition of lines negates any aesthetic merit that the overall shape might have.

55 plus for a lousy weak kneed 4 pot noise diesel crap suspension and a gearbox which belongs on a shuffle board. They either think the punters are mad or the execs responsible at MB hate the UK because of brexit and sent this over with one middle finger raised. Response is Winston Churchill sign the other way round
5wheels 11 May 2019

55 plus for a lousy weak kneed 4 pot noise diesel crap suspension and a gearbox which belongs on a shuffle board. They either think the punters are mad or the execs responsible at MB hate the UK because of brexit and sent this over with one middle finger raised. Response is Winston Churchill sign the other way round
View all comments (10)