BACK TO ALL NEWS
Currently reading: Seat Altea and Altea XL axed to make way for new SUV
UP NEXT
Facelifted Mini could gain plug-in hybrid Cooper S variant

Spanish car brand is ending production of the Altea MPV to make way for its Leon-based SUV model, which is due in 2016
Share
Close
Share story

The Seat Altea and larger Altea XL are being discontinued globally. It’s understood that the continuing decline in sales of MPVs in Europe has spurred Seat’s decision to cut the model from its line-up.

Official sales figures reveal that Seat sold a total of 439 Altea models in the UK during 2014, and 445 Altea XLs. By comparison, Ford shifted around 14,000 units of the B-Max in this country last year.

Although no direct replacement for the Altea is planned, Seat is following the global shift from MPVs to SUVs by launching its own SUV model, based on the Leon hatchback, in 2016.

Intended as a rival to the Nissan Qashqai, Seat’s first SUV model is due to be unveiled at the Geneva motor show in March of next year. It will be followed in 2017 by a smaller SUV, designed to take on the Nissan Juke in Europe.

Seat’s decision to realign its product portfolio more towards SUVs and MPVs is nothing new. Renault famously defied convention last year by morphing its Espace MPV into a reborn crossover, while sales figures across Europe show a continuing trend towards SUVs rather than traditional saloons and MPVs. 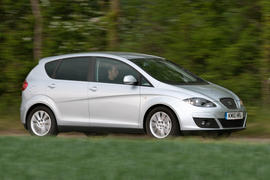 The Seat Altea may be getting on a bit now, unveiled in 2003 and able to trace its roots right back to the Salsa concept car from the 2000 Geneva show, but that doesn’t mean it’s any less relevant

What is Seat for?

20 August 2015
Given its success at establishing clear, consistent brand values and market positioning for its other marques, VW Group seems to be making rather heavy weather of Seat. This is partly a failure to define clearly what the brand stands for, and partly down to its inconsistent product offering. At one point it was described as a "Spanish Alfa Romeo", i.e. a more "sporting" offering than either VW or Skoda, with "Mediterranean" flair. They started well enough with the original Leon and its Alfasud-like looks. However, this image was undermined in 2004-05 when the whole range, with the exception of the Ibiza, adopted a distinctly unsporting MPV style. Regarding the lack of consistency in the product offering, consider the Toledo: the first generation model to bear this name was a conventional (if slightly large) C-segment hatchback. The second generation was a four-door saloon. The third generation was the bustle-backed MPV, which was quickly supplantlated and undermined by the introduction of the Altea XL. The fourth (current) generation Toledo is a derivative of the Skoda Rapid, a smaller conventional hatchback which straddles the B and C-segments. So, what exactly is a Seat Toledo, in the mind of potential buyers? Consider also the Exeo, a restyled B7 generation Audi A4 D-segment saloon and estate. It gave Seat an offering in a new segment and sold reasonably well for five years from 2008 to 2013, but has not been replaced, so owners now have to look elsewhere for a replacement. Now Seat is jumping onto the SUV bandwagon rather late, possibly just in time for this trend to fade.

What is SEAT for?

20 August 2015
....I am not surprised that VW is making heavy weather of SEAT.
Basically it is surplus to a requirements....a brand with no purpose or reason.
I mean, just look at VW, Skoda and Audi, between the three all the ground is covered....unless SEAT is the name for the new cheap range from VW (Dacia equivalent).
The sooner VW realises this and dumps SEAT - the better for them. They would be better off with Alfa Romeo in the group...at least that has some heritage to build on.

I'm surprised to hear that

20 August 2015
I'm surprised to hear that the Altea is still on sale: I thought it was axed a few years ago.

They could take over from Skoda

Now that Skoda has gone away from their previous strong and unique designs and appear to be replacing them all with rather generic models (Rapid, new Octavia, new Superb) perhaps SEAT could take over that market - although a Crossover isn't exactly the choice to make a bold statement these days.

Although on that subject, how close have crossovers becomes to MPVs anyway? They no longer seem to bother much about ground clearance, off-road ability or any other mechanically differentiating factor.

20 August 2015
Does this mean the (unique?) A-pillar parked position wipers will be lost for ever?

I didn'g realise that they

Died due to negligence

21 August 2015
As a Leon++ the Altea family was a good idea. An alternative to the C-Max with less pretensions than a Touran. Would have made more sense with 4wd than the XPerience Leon ST, but Seat never updated the Altea leaving it to wither. Shame - an updated version could have been a contender!

What is SEAT for?

21 August 2015
I always thought it was the sportier brand of the VW group. Skoda are about value, space and comfort, VW are a bit premium (rear over priced), SEAT were always the ones for something a bit sporty, with a bit more design flair and lower price tag. I think there is room in the market for SEAT, but I have to echo the comments above that VW is making heavy weather of SEAT.

It is just so fashionable to

2 September 2015
It is just so fashionable to dump on SEAT and here are all the "what is SEAT for?" postings. What is Kia for, what is Renault for? But no, SEAT seems the long standing target.
Here in York there are so so many Ibizas and Leons on the roads. Last year was SEAT's best ever year in the UK with over 50k cars sold.
If the Altea had been a Skoda (like the Roomster) or a VW like the Touran a replacement would be in the pipeline in addition to an SUV.
Skoda is given the endless new models and factories in China and yet people comment that SEAT's sales are not on par. Of course they blummin aren't, but all considered SEAT is doing amazingly well.