BACK TO ALL NEWS
Currently reading: Saab nears end of 9-5 testing
UP NEXT
All-new entry-level McLaren to be 600bhp-plus V6 PHEV

Saab is readying its new 9-5 saloon for launch later this spring having completed more than 300,000 miles in testing on roads from the Arctic Circle to southern Spain.

Chassis testing took place on some of Europe’s most challenging roads, including in Spain, Germany, Italy and the UK.

The six-strong driving team brought a fleet of 15 9-5s from the Arctic Circle in Sweden’s frozen north all the way to the baking plains of southern Spain in an effort to replicate real-world conditions for prospective buyers.

See the Saab 9-5 in winter testing

“Throughout the development process, we focused on giving this car all the exciting driving characteristics you would expect from a Saab,” said Johansson.

“We’ve developed the car to have predictable, neutral handling in most situations. When cornering under extreme loads, it is forgiving and easy to control with no sudden surprises.”

As well as extreme conditions, the driving team also tested the fleet of 9-5s at the high-speed bowl at Nardo in Italy, and at the Nurburgring.

Follow us on FacebookSee all the latest Saab 9-5 reviews, news and video 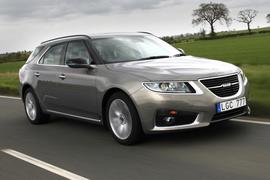 It looks superb, really like the little air vent just behind the front wheel arch.

Reading through the article though, I did wonder if the Spanish plains were extreme enough; then again I have no intention of driving a Saab through the Sahara.

[quote Autocar]Throughout the development process, we focused on giving this car all the exciting driving characteristics you would expect from a Saab,” said Johansson.[/quote]

All the exciting driving characteristics expected from a Saab? The last Saab I drove certainly had characteristics going around corners but I'd never have described them as exciting. The only skid marks I ended up with were the ones in my pants!

Not a big departure from the outgoing model but nicely rounded with a little spattering of design touches..... little airvents, rear lights, exhaust etc. I would like to see more of the interior though.

The only skid marks I ended up with were the ones in my pants!

That's what happens to people who don't know how to control RWD cars too.(me being a prime example) RWD get's the adrenalin pumping for me everytime the back-end pulls out. As odd as it may seem I'll rather take torque-steer thanks.

Love all the pics ive seen of it so far.Dunno if its just my overactive imagination, but it has a dolphin like look about it

Is that Kurt Wallander in the interior pic?