BACK TO ALL NEWS
Currently reading: Off-roading in the Suzuki Ignis 4x4
UP NEXT
Hardcore BMW M4 CSL brings 542bhp, sheds 100kg

Off-roading in the Suzuki Ignis 4x4

Can a no-frills 4x4 really hold its own when it comes to off-road rambling? Always up for a challenge, we've tackled the old Fosse Way in the new Suzuki Ignis
Open gallery
Close

Go green laning, they said. It’ll be a giggle, they said. You know how it is: small car, but large fun, in a slow, discreet, sliding, rocky, muddy, amusing way.

Sure, I replied. You never know, they said, like a Fiat Panda 4x4, this new Suzuki Ignis might surprise you with how far it’ll go off-road. It might, I admitted.

It might, only now I’m not so sure, because I’m waiting for a photographer (I’m early, he’s not late, because he never is) at a service station by the M4. To pass the time, I’m casually reading the bumpf for the new Ignis and I have a dawning suspicion that this particular example might be two-wheel drive. 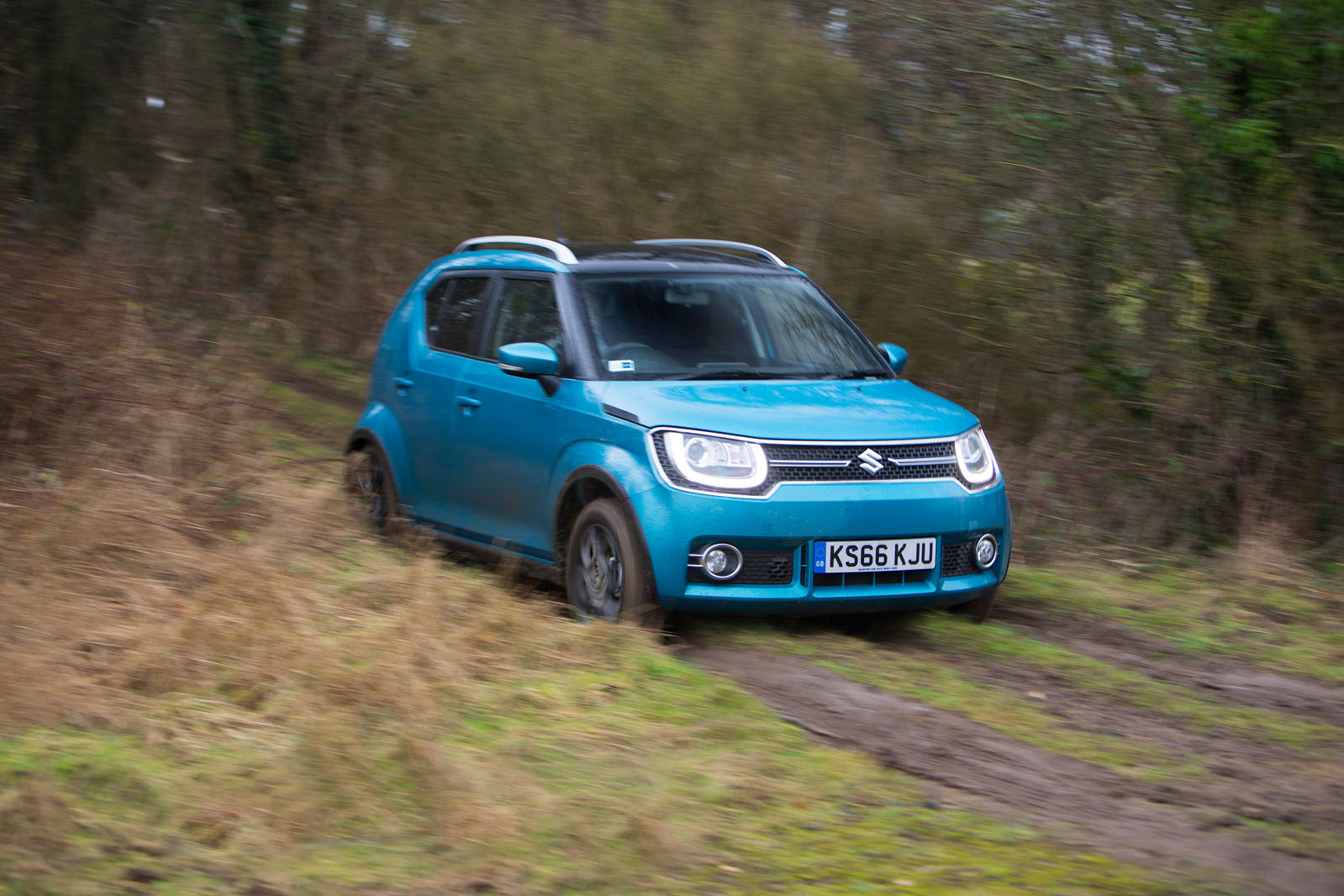 The Ignis can be had with fourwheel drive, obviously. We asked for it that way, more obviously. When I collected the car in the dark last night I glibly assumed it was. Suzuki calls its 4WD system ‘Allgrip’, you see, and announces it – according to the pictures in the brochure I’m reading – by a little badge on the bootlid. My car doesn’t have an Allgrip badge on the bootlid, and it isn’t exactly on off-road tyres, either. This could be the shortest off-road trip in history.

So I get out and kneel behind the car and – what do you know? – there it is, thank heavens, a live rear axle with a differential in the middle of it. Hold on: a newly launched car with a live rear axle? Well, that would explain the ride quality, I suppose.

Most of the Suzuki Ignis Allgrip isn’t quite as old-school as its back axle. This is otherwise a modern compact crossover, on a new platform called the Suzuki Next 100 (not very catchy, fellas), which first underpinned the fairly ordinary new Suzuki Baleno. The Ignis is a rather more distinctive-looking thing, what with its hints of Vitara (the clamshell bonnet) and Whizzkid (the rear-quarter louvres). I rather like the way its jib is cut.

In two-wheel drive flavour the Ignis is as mechanically conventional as you’d expect. It has MacPherson struts at the front and a torsion beam at the rear, with a 1.2-litre engine (with no turbocharger) transversely mounted at the front, driving the front wheels through a five-speed manual gearbox. An automatic transmission is optional.

What makes this 4WD variant interesting isn’t just that the rear wheels are driven – there’s a viscous coupling which detects slip at the front and pushes power to the back – but also because it’s a mild hybrid. This is thanks to an initialism (and Suzuki loves an initialism) called SHVS (Smart Hybrid Vehicle by Suzuki). It’s an extremely mild hybrid system. If it were a curry, it would be a desperately sad analogy that your kids could order with boiled rice and a plain naan. 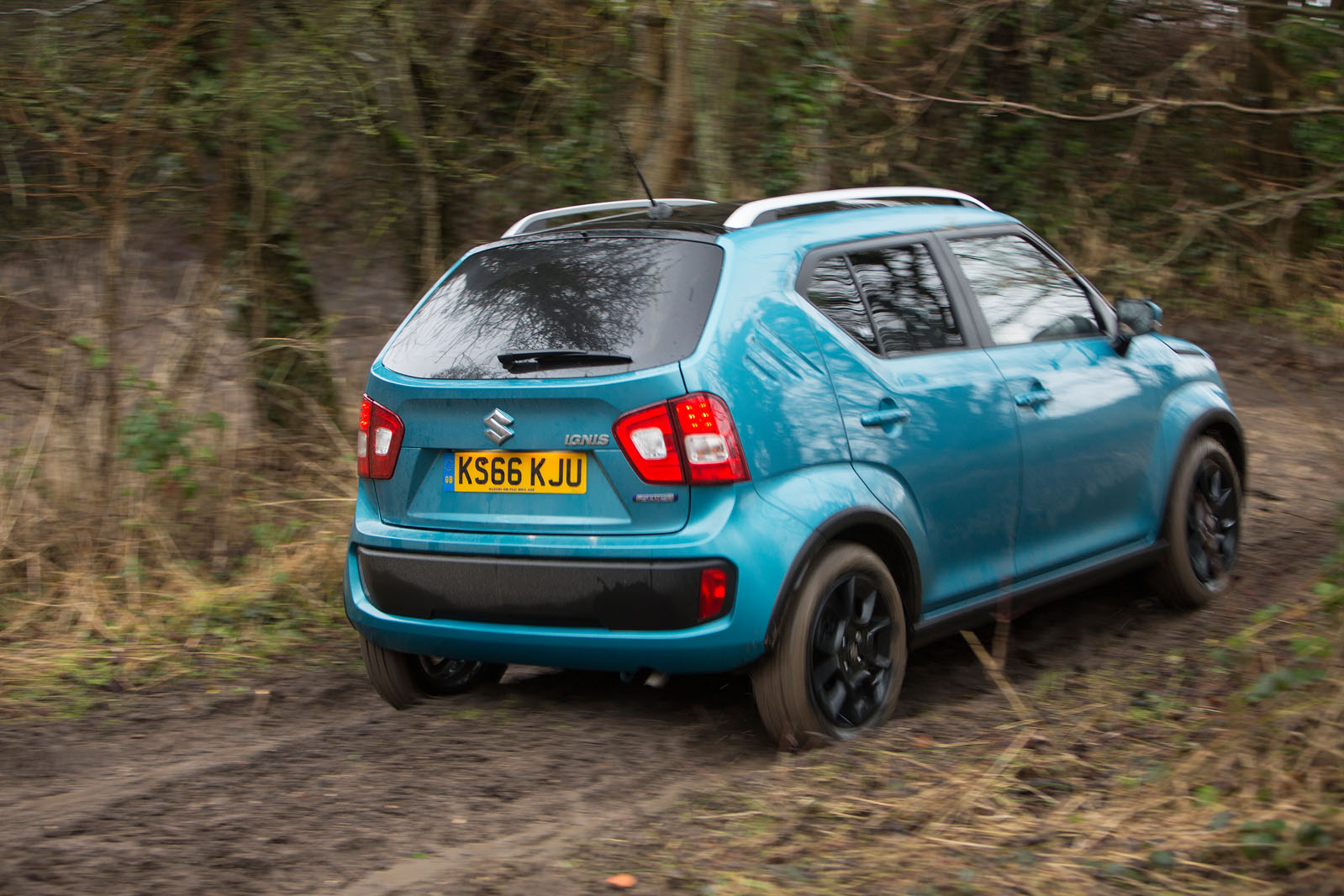 SHVS comprises an uprated starter motor-generator system to allow a smooth automatic stopstart. When it draws power under deceleration, it saves it to a battery underneath the passenger seat and, at times, it’ll chip that energy back in through the motor under acceleration. The motor makes – wait for it – 1.7bhp, but also a more helpful sounding 36lb ft of torque, assuming conditions are right. The battery has to be within a certain temperature range, and have enough juice, and so on, so it doesn’t always work. That might explain why I quite often stalled, but sometimes didn’t, despite the pedal weights and spacings being absolutely spot on. I told you this new Ignis is an interesting car.

Anyway, so this Ignis is four-wheel drive after all, the weather is terrible and, thanks to a feature I did in a Land Rover Discovery last year, I know where there are some off-road tracks that might pose a decent challenge for the Ignis, as well as an impressive water splash.

I fear for the future of the green lane, or the Byway as it’s officially known. I think as time goes on we’re going to have to use them to prove their worth, and fight for the continued right to use them. Some close completely in winter; I once found two in Hertfordshire that had been blocked – illegally, but apparently with impunity, presumably by local landowners – by tree trunks. Sometimes they’re just poorly marked or it’s implied you shouldn’t be there. It’s not on. They’re ours to use and we should cherish them and fight for them as horse riders do bridleways.

But plenty of ye olde Fosse Way is still accessible, in some ways more so to a Suzuki Ignis with Allgrip than a Land Rover Discovery 4. I spent two days polishing scratches out of the Discovery’s paintwork after driving down some of these lanes, but the Ignis is only 1690mm wide and a tiny 3700mm long, which means that it slips through gaps that other off-roaders cannot. 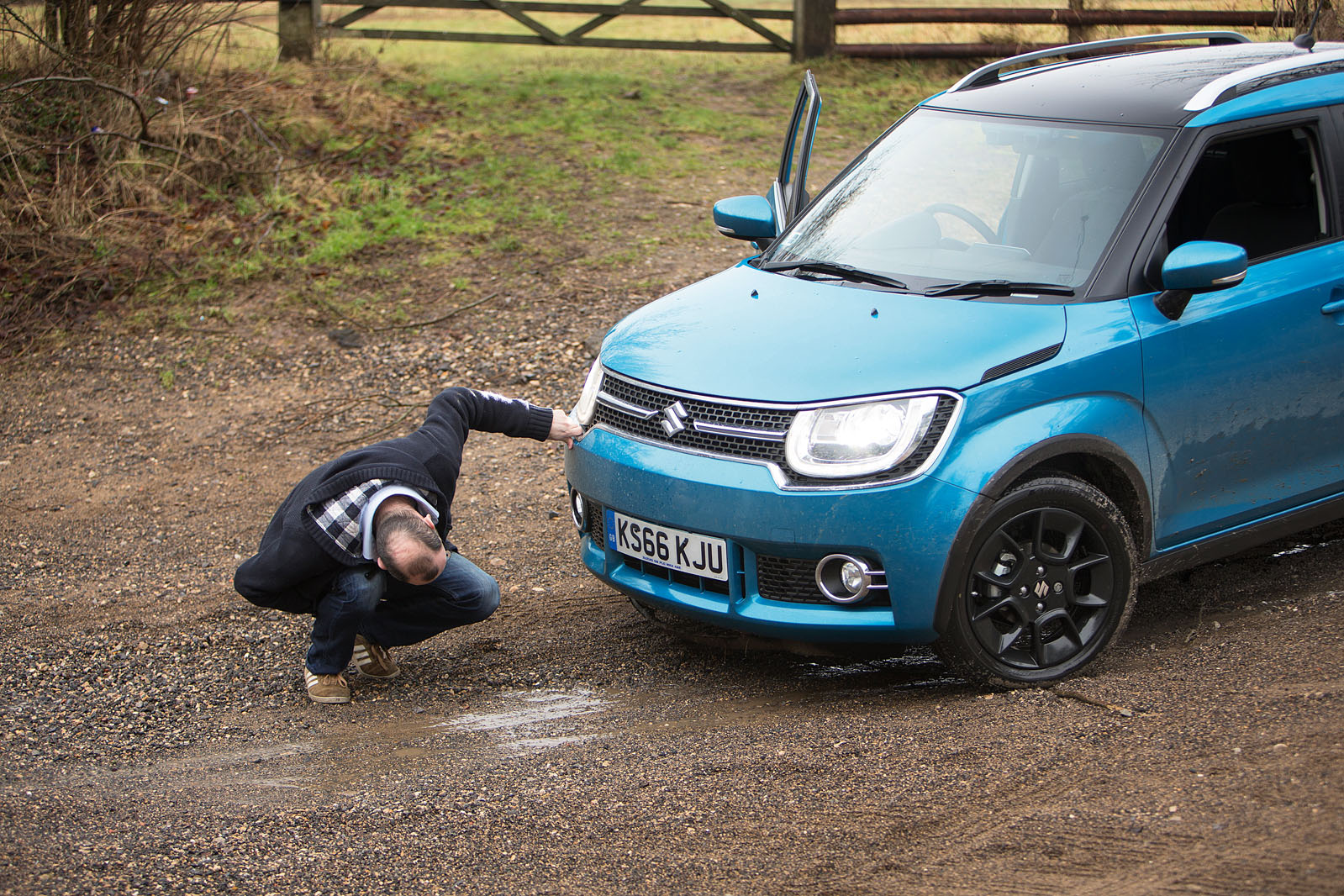 Does this make it a surprising good off-road package? Well, let’s be blunt, no. For the record, the approach, departure and breakover angles are 20, 38.3 and 19.2 degrees respectively, which sounds fine, but we’d only taken two photographs before a little rubber strip beneath the Ignis’s bumper was pulled clean off (albeit easily reattached), despite a 180mm ground clearance.

When we reach the ford I put in a call to Suzuki and ask if they quote a wade depth. There’s a pause on the line, which I infer means that just asking the question indicates that what I’m contemplating isn’t a great idea. The exhaust pokes out below the rear bumper and, although the air inlet is halfway up the grille and then rises further on its way to the inlet manifold, I figure there’s the mild hybrid system to consider too.

So like a nervous toddler I splash around in the shallows for a while instead, and then play in the mud. All with relative impunity: at 920kg, this Ignis is barely heavier than a big horse and has a softer footprint, too, so doesn’t leave too much behind it.

No, this is not a car for serious off-road antics, but it’ll likely get further than most owners would dare to take it, plus it’ll be quite a lot of fun in the meantime.

And when you do leave the rough behind? Well, then it’s a compact crossover made by Suzuki, with all the mix of oddities and normalities that entails. Because it is a short car, it needs an upright driving position in order to free up legroom in the rear, so that’s what it gets. The interior is imaginative by Suzuki’s standards but pretty vanilla by anybody else’s. The engine is a zingy, fizzy unit, the five-speed manual ’box is genuinely snicky, and the dynamics are… well let’s not dwell too seriously on those, because it doesn’t matter. Yes, the steering is weighty and vague and the ride a curious mix of softness and fidget, although I’d suspect the latter is better on two-wheel drive versions.

Plus, in other oddity news, that 4WD system means the boot is small and so is the fuel tank. When it was down to the last of ten bars on the fuel gauge, I still only got 26 litres into it.

Dynamically and objectively, then, the Ignis is in some ways a peculiar little car, and in other ways an entirely normal one. The sensible thing to do would be to buy a Ford Fiesta or Volkswagen Polo, but you know what? I don’t give a damn if you don’t do that. Lots of Suzukis feel quirky yet old-fashioned, and this is one of them. With that comes a refreshing dose of… well, ‘honesty’ isn’t the right word, but it’s the first one that comes to mind.

This is a sub-£14,000 car even in its highest specification, and it has personality. As we know, personality goes a long way. Just not, perhaps, as far as you’d think when it’s muddy.

Suzuki should do what Fiat done for the Panda

The Fiat Panda is available as a the Panda 4x4 and then the Panda Crosscountry 4x4. Suzuki should do the same with the Ignis and make a tougher 4x4 version of it. Would love to see a test between this and the Panda 4x4 and any other small 4x4s that are on the market.
rybo1 4 March 2017

Probably a fun car for some people. However, I have to say that the photography was really sub-par in promoting the car.
si73 5 March 2017

rybo1 wrote:
Probably a fun car for some people. However, I have to say that the photography was really sub-par in promoting the car.

I like the photos, they do the opposite to my eyes and I actually found myself wanting one.
Shrub 4 March 2017

Would love to see a full Electric version

Pretty unique it would be too, and just the sort of thing I would associate with Suzuki.
View all comments (6)