The Citroën C1 city car has slipped under 100g/km Co2 emissions for the first time as part of its final round of revisions before an all-new C1 is launched in 2013.

This facelifted 2012 Citroën C1 is on show at the Brussels motor show this week.

Tweaks to its 67bhp 1.0-litre three-cylinder engine have resulted in CO2 emissions of 99g/km (down from 103g/km) and combined economy of 65.7mpg (up from 62.8mpg) for the C1 1.0i variant mated to a manual gearbox. The economy improvements make this version exempt from the London Congestion Charge.

The new C1 is also available with an Electronic Gearbox System complete with steering-mounted paddle controls for enhanced handling and driving pleasure. This EGS version delivers 62.8 mpg (combined) and emits 104g/km of CO2.

Styling modifications include a new front bumper, a shorter bonnet and the addition of LED daytime running lights, plus new 14in wheels.

The front bumper has been redesigned to house fog lights and LED daytime running lights. The vertical design LED light signature mimics that seen on the DS3 and C4 Aircross.

Top-of-the-range variants get 14in alloys as standard, while mid-range versions and above feature a chrome grille strip. An uprated CD audio system is integrated with a Bluetooth system and USB socket.

The full UK specification of the car is yet to be finalised, as is pricing, but the C1 is due to arrive here in April.

See all the latest Citroën reviews, news and video 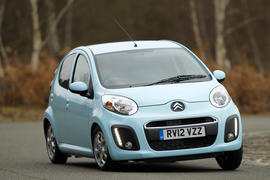 I'd prob have this over an up, but I quite like the new picanto, as for the comment that the up is much safer, I dont see why, this trio performed very well in crash tests. whats shocking is I saw one parked beside a 106 the other day and it made the 106 look small, considering the 106 was a supermini it really shows how things have grown, and makes me think a performance version isnt a bad idea, how about a 107 rallye with white wheels and about 100 or so bhp

I'd happily run either of this trio. A great, characterful runabout with low running costs and good value for money. Everything a car like this should be. Despite VAG's much awaited contributions in this sector of the market, my money would always go on the 107/Aygo/C1.

LP in Brighton wrote:
I for one wouldn't discount this Citroen from my small car shopping list. bear in mind that a sub 100 gm/km "Bluemotion" VW Up is almost certainly going to cost the wrong side of £10,000.

The Bluemotion has been available to order since the books opened, available on Move Up! it costs just £9330... Cynical! :) I don't think that many who buy cars like these and typically do relatively lower mileages will be so concerned about saving £20 or £30 a year road tax, I'm looking forward to demonstrating how much the better all-rounder the Up! is compared to the PSA cars and trading on all these Aygos, C1's and 107's - hmmm I wonder if they'll have a higher scrap value! Hahaha... Joking!
View all comments (15)