BACK TO ALL NEWS
Currently reading: Porsche Panamera model range to expand with performance hybrids
UP NEXT
BMW opens door to M1-inspired electric supercar

Two “performance-orientated” plug-in hybrid versions of the Porsche Panamera will be offered in the model range of the new luxury saloon.

Porsche unveiled high-performance four-wheel-drive petrol and diesel variants of the second-generation Panamera this week, with further derivatives set to join the range at a later date.

A petrol-electric plug-in Panamera S E-Hybrid formed part of the outgoing model’s range, but the incoming version will boast a choice of hybrids, confirmed Porsche chief executive officer Oliver Blume: “In the near future we will have an entry plug-in hybrid model and we will have a top model. That’s our strategy."

He wouldn’t be drawn on the technical format or capabilities of the hybrid system that will be used to propel these two models, beyond saying there is a possibility to gain more performance from it, as well as greater efficiency.

“For me at this moment the plug-in versions are the best way to fulfil all the CO2 regulations but also our performance needs,” he said. “We have the possibility to put in more power.”

All of the new breed of turbocharged V6 and V8 petrol ‘KOVOMO’ engines that have been jointly engineered between Audi and Porsche can be combined with hybrid systems.

Head of drivetrain development Jörg Kerner ruled out one hybrid being based on a petrol engine and the other on a diesel to suit different market requirements in different markets.

The move marks a shift on philosophy away from using hybridisation exclusively for efficiency gains to also using it to enhance performance. It is possible that the hybrid Panameras could feature an ‘e-boost’ function that deploys electric motors for a temporary increase in performance. 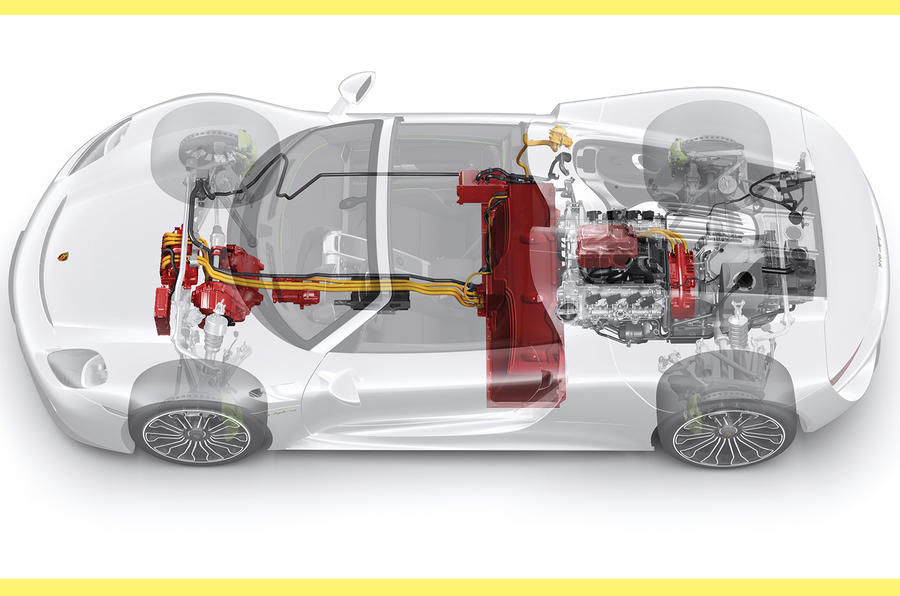 “If you drive a Porsche you want to have fun. That’s the reason we say we have a performance type of hybrid. You can drive electrically but you can also have fun,” said Kerner.

It’s possible that one Panamera hybrid will feature a petrol V6 and the other a V8, with electric motors on both axles to assist performance.

Blume also explained that a move towards electrification – such as the production version of the all-electric Mission E Concept that’s due at the end of the decade – would not lead to Porsche abandoning its performance car roots.

“We are working on our strategy for the next years and one important point is to carry over all of our traditional experience and combine it with future technology. Electric technology is very important for Porsche, but so is our performance know-how. In the end we will have a car that will offer both Porsche performance and full electric performance.”

The production version of the Mission E concept will have “a very high power electric motor that will be the best one [on the market] when we launch the car. We will aim for a driving range of about 310 miles and what will be very important for us will be the charging time.

“Via an 800-volt charging system, we will be able to do an 80% charge in 15 minutes. That will be a plus point for our customers, especially on longer trips – to stop the car, charge it, drink a coffee and then continue to drive.”

Blume said Porsche is working with technology partners, electricity companies and other automotive manufacturers to investigate the creation of a rapid-charging network capable of handling its battery-powered electric cars.

At least they make a profit. Not just burning shareholders funds .
xxxx 2 July 2016

At least they make a profit. Not just burning shareholders funds .

That'll explain why VW own Porsche then

At least they make a profit. Not just burning shareholders funds .
xxxx 2 July 2016