BACK TO ALL NEWS
Currently reading: Pininfarina signs £30m deal to develop new platform for Iran Khodro
UP NEXT
Mazda to launch own version of new Toyota Yaris by 2023

The deal will see Iran Khodro, which manufactures vehicles for Iranian brand Samand, Peugeot and Renault to be sold in Iran, produce a medium sized passenger car, likely a saloon or small SUV, first.

Pininfarina will be involved in the entire process of getting the car to production, from concept design to physical validation of the final product. It will even support the start of production.

Silvio Pietro Angori, Pininfarina Group CEO, said: “The agreement with Iran Khodro represents another important step in the growth strategy of Pininfarina on markets of the new Silk Road and the Middle East.

“We are happy to contribute to the development of the Iranian Automotive industry through a very significant style and engineering programme for our company.”

The partnership, which is planned to last three years, isn’t the first of its kind for Pininfarina. The former design house has expanded its portfolio to include full engineering projects such as the recent Hybrid Kinetic Group turbine cars and Pininfarina Fittipaldi EF7.

It is also planning an electric supercar, with links to parent company Indian automotive giant Mahindra's involvement in Formula E. 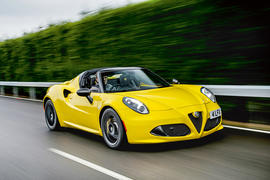 Alfa's niche coupé now comes as a convertible, and while it still lacks the road refinement of a Porsche or the engagement of a Lotus, it delivers on track