Electric-only XC90 successor due next year built on a new platform, ahead of brand going electric-only by 2030
Open gallery
Close

Volvo has unveiled a new Concept Recharge that previews the forthcoming electric-only XC90 successor that will spearhead its next generation of cars.

The Swedish firm currently has two electric cars in its line-up, the XC40 Recharge and C40 Recharge, but both are built on the multi-powertrain CMA platform. The firm will launch the XC90 successor as its first electric-only car built on a new platform next year, and will become an EV-only brand by 2030.

Notably, Volvo boss Hakan Samuelsson has revealed that the forthcoming large SUV, which will be closely related to the Polestar 3, won't carry the XC90 title, but will carry a new nameplate to signify its role in leading the next-generation of EV-only Volvo.

"It will be the new Volvo flagship SUV but it’s really the first of its kind and will be followed by a lot of cars based on the same architecture," said Samuelsson. "We will mark that by deviating from the normal way of giving our cars names with XC for an SUV and so on. To mark that this next generation kind this car will also have a name, like a child."

Samuelsson would not divulge the name, which he said would be revealed closer to the car's launch.

Volvo has teased the new model with the new Concept Recharge SUV, which design chief Robin Page said represented “a manifesto for the all-electric future of Volvo Cars, as well as a new type of vehicle.” He added: “It displays new and modern proportions that go hand in hand with increased versatility and shows what technology can enable in terms of design.”

The Concept Recharge is designed to showcase how Volvo design will change for pure electric cars, and is built on a ‘less but better’ philosophy that Volvo says it an extension of its Scandinavian design heritage.

As with other bespoke EVs, the machine features an entirely flat floor, with the batteries built into the base of the car. There are also short overhangs at front and rear due to the lack of a combustion engine, and an extended wheelbase. The concept features backwards-opening rear doors, although it it unknown if these will be used on the eventual production version. 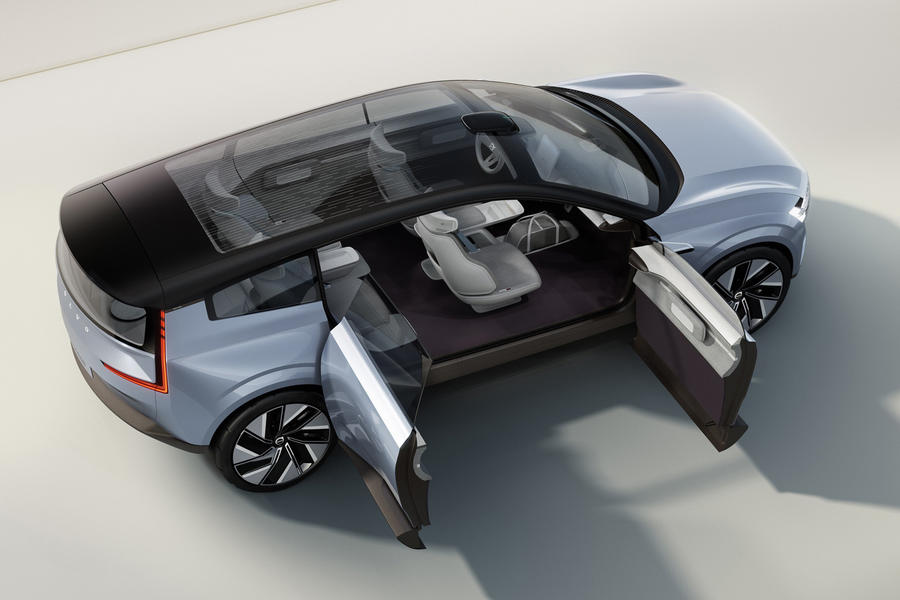 The Concept Recharge showcases Volvo’s new design language, including the removal of more unnecessary design elements. The grille has been replaced with a new ‘shield’ front that has Volvo's logo and traditional diagonal line symbol built into. That shield front runs the width of the car to meet Volvo’s traditional ‘Thor’s Hammer’ headlights. The front lights are reworked using LED technology and showcase narrow daytime running lights that are then switched for brighter full headlights when needed.

The LiDar scanner, which will be included as standard on the production version and other future Volvo vehicles, is mounted on the front of the roof where it meets the windscreen. Usually only featured on cars designed for autonomous driving, Volvo says the use of LiDar systems will allow it to greatly boost safety, with real-time data vastly accelerating the development of self-driving systems.

Using the stretched wheelbase, Volvo’s designers have repositioned the seats, lowered the bonnet and added a sloping roof profile. Volvo says the design enables it to retain the ‘high eye point’ favoured by car buyers, but offering better aerodynamic efficiency than traditional SUVs. The rear seats feature a revamped 'booster cushion' system that allows them to be raised higher than the front seats, helping to boost visibility for children.

The dashboard features a large 15in touchscreen which features the latest version of Volvo’s new Google-based infotainment system. A variety of sustainable and natural materials are featured within the cabin, in a bid to give it what Page terms “a truly Scandinavian living room feeling.”

There seems to be a vast amount of wasted space in this concept, and the XC90 has always been a full 7 seater, even as a PHEV, I believe even now its the only one, most other manufacturers dump the rear seats for batteries, I cant see this being the replacement, but I suspect something similar may hit the market, Volvo have a habit of building concepts that are close to the finished product. This may well be something like a V100, a vehicle bigger than the 90 series has been talked about in the past.  The increased rear legroom would appeal in the Chinese market.

Just plain weird - has it been stretched like Mike TV in Willy Wonka?