BACK TO ALL NEWS
Currently reading: New tech gives "more freedom" to develop electric 911
UP NEXT
MST Mk1: Is this the ultimate rally recreation?

Porsche's design boss already has a vision of what a 911 EV could be, but it won't hit the road until 2030
Open gallery
Close

Porsche design chief Michael Mauer has hinted that he has already conceived how the design of a future electric Porsche 911 could work, but insisted such a model is unlikely to appear before 2030.

The Stuttgart firm has long played down talk of an electric version of the classic Porsche 2+2, insisting it would be the last Porsche model to go electric due to the emotions attached to its petrol engine and the extra weight of a battery-electric model.

When asked about the challenges of producing an electric version similar to the rear-engined 911, Mauer said: “The silhouette of today’s 911 is so iconic, and that has to stay. We’ve proved over the years that the new 911 is always a 911 – but it’s a new one.

“Listening to the engineers now when we talk about combustion engines with the limitations such as exhaust systems, I would have been more worried how I should package this in 10 or 15 years, because it’s most likely the rear overhang would be almost two metres. So I’m less worried because this electric technology gives us more freedom.

“We will see. Maybe with the next generation, we still can do a combustion-engine 911. I don’t know. As a designer, we will find solutions.”

Asked about Porsche executives saying they could never imagine an electric 911, Mauer said “differing opinions” were part of Porsche’s culture and lead to the best solutions. “I’m part of the group that went from air-cooling to water-cooling, and now we have turbocharged engines,” said Mauer. “Maybe an electric 911 is another story, but purely from a design standpoint, an electric 911 is even easier in the future.

“I used to say that a 911, as a whole, is 100% emotion. And the flat-six engine sound is not 100% of the emotion. It’s the styling, it’s the handling, how it goes around the corner. Electric engines regarding torque and performance offer that: yes, it’s missing the sound, but if you look at young kids today, do they need it? I don’t know.”

Although a pure-electric version of the 911 is some years away, a prototype spotted recently at the Nurbürgring suggests the long-promised hybrid model is nearing the end of its development cycle. 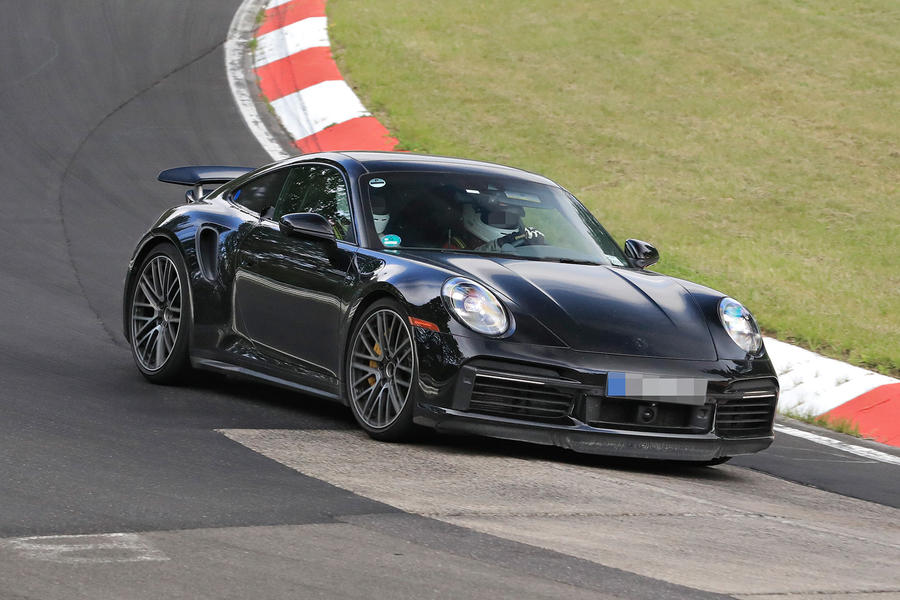 The current, 992-generation car was engineered from the start to accommodate both mild- hybrid and plug-in hybrid powertrains, with more space built into the rear end to allow for fitment of a small gearbox-integrated electric motor.

The capabilities of a plug-in hybrid set-up are not yet known, but it is understood that the company is aiming to achieve approximate performance parity with the Porsche Panamera Turbo S E-Hybrid. That car makes a combined 690bhp, can crack the 0-62mph sprint in 3.2sec and delivers a claimed electric range of 31 miles.

Must be a hell of a dishwasher you've got Boris.

When the 911 goes electric it will be the final nail in the coffin of the ICE. It will also mark the end to one of the only two constants in my life, 911, and football team. LUFC survived, the ICE 911 will not. I drove a Taycan Turbo S recently, and I operate my dishwasher each day, and experienced the same emotion from both.

Personally, I think it'll be a crying shame when the internal combustion engine finally bows out. I believe that the development of them and associated 'synthetic' fuels and oils should continue - along with the introduction of battery electric vehicles, hydrogen fuel cells, etc. - so that there is more consumer choice and wider revenue streams for the manufacturers to ultimately develop better cars. All ICE cars are cleaner than ever before and can be cleaner still. An electric 911 shouldn't mean the end of an ICE 911. It should be an available alternative.

Thing is Boris9119 you're comparing Porsche's first larg'ish 4 door BEV against their last 3 door ICE sports car with over 60 years of refinement.