BACK TO ALL NEWS
Currently reading: New Jeep Grand Cherokee on sale in 2022 with 375bhp PHEV
UP NEXT
Worth the weight? Lotus Emira first ride

Reinvented flagship SUV will take on Land Rover Discovery in UK next year; full EV due in 2025
Open gallery
Close

The new Jeep Grand Cherokee will go on sale in the UK in the middle of 2022, offering a plug-in hybrid powertrain for the first time – and an electric version is tipped to arrive by 2025.

Due to launch in the US early next year, the fifth generation of Jeep’s flagship large SUV has been extensively redesigned with new exterior and interior design, with the firm giving a renewed focus on balancing on-road driving dynamics and off-road capability.

The new Grand Cherokee 4xe PHEV features a turbocharged 2.0-litre four-cylinder petrol engine mated to two electric motors, offering a system output of 375bhp and 470lb ft of torque. The alternator is replaced by a motor-generator connected to the engine's crankshaft, while a larger transmission-mounted motor-generator replaces the torque-converter. A dual-clutch system manages power and torque from the engine and motors.

Power for the motors is drawn from a 400V 17kWh battery that Jeep claims allows for 25 miles of electric-only running and a claimed 68.45mpg (imperial gallons). Three driving modes will be offered to manage the energy usage. 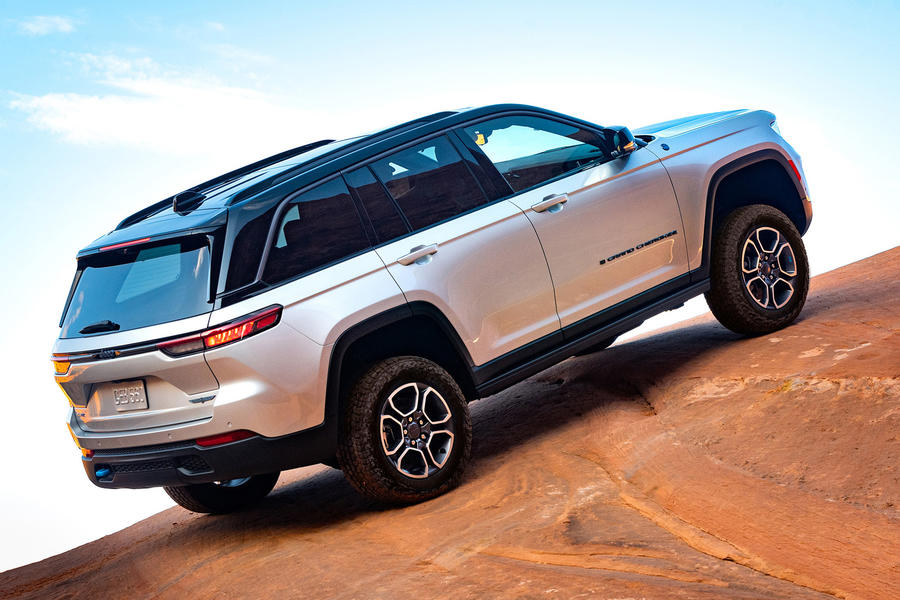 Notably, the 4xe system will be offered in on the hardcore off-road Trailhawk model, including a two-speed transfer box, an electric limited-slip differential and Jeep's Selec-Terrain traction management system.

The Trailhawk 4xe will offer 278mm of ground clearance – 90mm fewer than other Trailhawks – and can be driven through water at depths up to 610mm. Jeep says that the high-voltage electronics are sealed and waterproof and the battery is protected by underfloor skidplates.

The Grand Cherokee includes a raft of other off-roading systems and a new front-axle disconnect option that runs the car in rear-drive mode on smooth roads to boost efficiency.

The new Grand Cherokee is built on a new architecture that Jeeps claims was “mission-specific” for the model. It will be offered in two different wheelbases and lengths. The standard five-seat Grand Cherokee will be 4910mm long, compared with 5204mm for the three-row Grand Cherokee L that was launched in the US earlier this year.

The styling is an evolution from previous models, including a revised seven-slot grille. There's a lower roofline and numerous other design features – including active grille-shutters, air curtains and redesigned rear pillars – to boost aerodynamic efficiency. 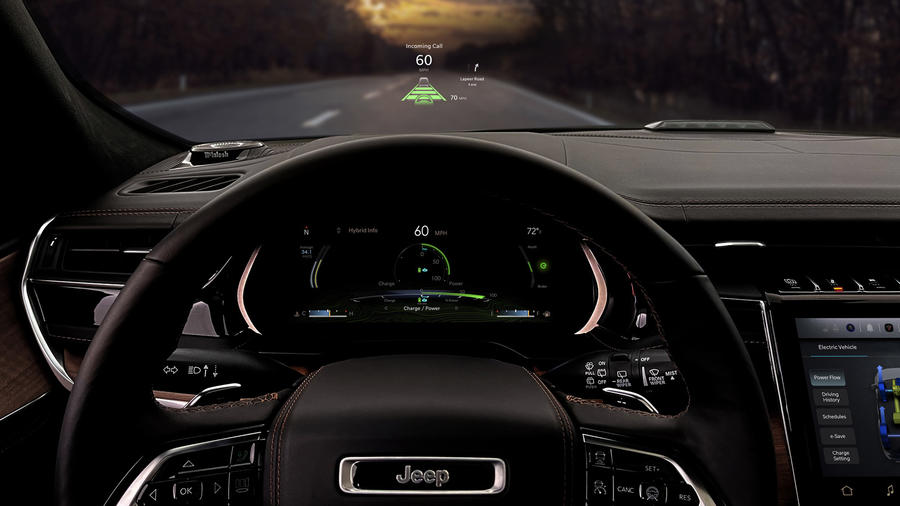 Inside, the SUV gains the fastest version of the Stellantis Uconnect infotainment system with up to three 10.1in digital displays (including one dedicated to the front passenger), a 10in head-up display, a wireless smartphone charging pad and Apple CarPlay and Android Auto compatibility.

As well as the 4xe PHEV, the Grand Cherokee will be offered in the US with a 293bhp 3.6-litre petrol V6 and a 357bhp 5.7-litre petrol V8, both driven through an eight-speed automatic gearbox.

While Jeep hasn't given any details of UK specifications yet, emissions regulations make it unlikely that the V8 will be offered here. It's likely that Jeep will focus on the 4xe for the European market.

FastRenaultFan 30 September 2021
I think it looks very tall and rather boring. It's looks like they were copying the current Land Rover Discovery for tallness and the Vauxhall/ Opel Mokka for the side rear quarter design.

The current model is a much better looking car.