BACK TO ALL NEWS
Currently reading: New Hyundai Ioniq 5 EV to be revealed on 23 February
UP NEXT
New Land Rover Defender V8 gets 525bhp and bespoke styling

New Hyundai Ioniq 5 EV to be revealed on 23 February

Hyundai is preparing for the imminent unveiling of the first model in its bespoke EV sub-brand: the Ioniq 5.

The new car, described by the brand as a “fundamental shift in BEV design approach”, will be fully revealed next week. It is the first production model to sit atop Hyundai and Kia’s new modular electric platform (E-GMP).

The Korean company suggests the design of the Ioniq 5, which appears to remain faithful to the 2019 45 concept on which it’s based, is said to provide a “unique experience that can only be enjoyed in dedicated BEVs” thanks to its proportions and stance.

New design elements include ‘Parametric Pixels’ (tiny pixel-style lighting elements that adorn the front of the car), a clamshell bonnet and 20in aero-optimised wheels. Hyundai’s global design boss, SangYup Lee, is confident tha the car establishes “a new standard against which all BEV design experiences will be measured”.

The latest preview image gives a restricted view of the interior, showing how the E-GMP's flat floor will enable a "breakthrough interior design". Chief among the innovations is a fully sliding centre console that enables ingress and egress from each side, for use in tight parking spaces. 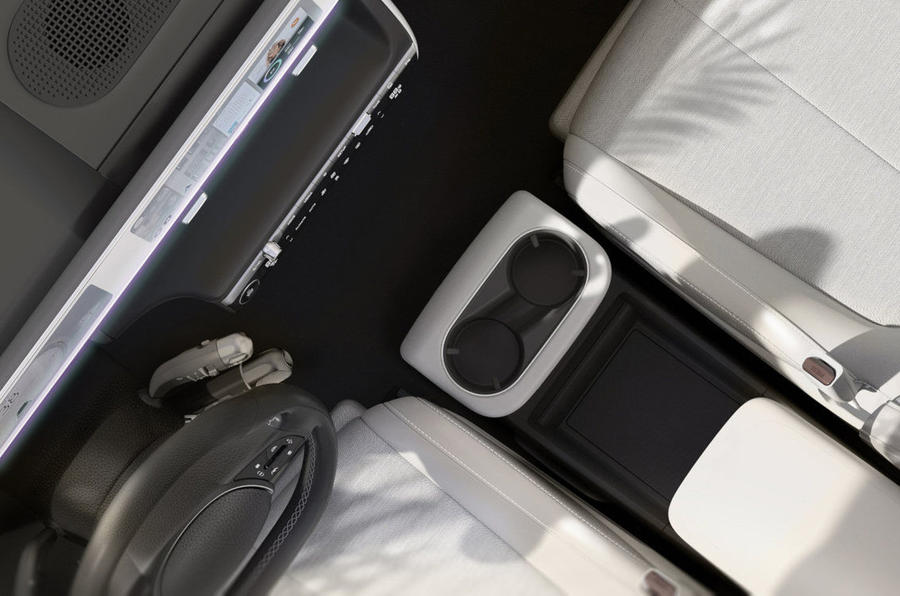 Technology found in the Ioniq 5 will include a Vehicle to Load (V2L) system offering a 3.5kW, 110/220v power supply via bidirectional charging - enough, Hyundai claims, to roast a turkey in a large oven. Ultra-fast charging promises to replenish up to 62 miles of range in as little as five minutes, too.

The Ioniq 5 is the first of three EVs set to fall under the Ioniq umbrella in the next four years.

Each will use a numerical naming strategy similar to Volkswagen’s ID line-up. Odd numbers will be used for SUVs and even numbers for saloons and other models.

The Ioniq 5 will be followed in 2022 by the Ioniq 6 electric sports saloon, which will take cues from the low-slung Prophecy concept. A large, as yet unseen SUV called the Ioniq 7 will land in 2024. 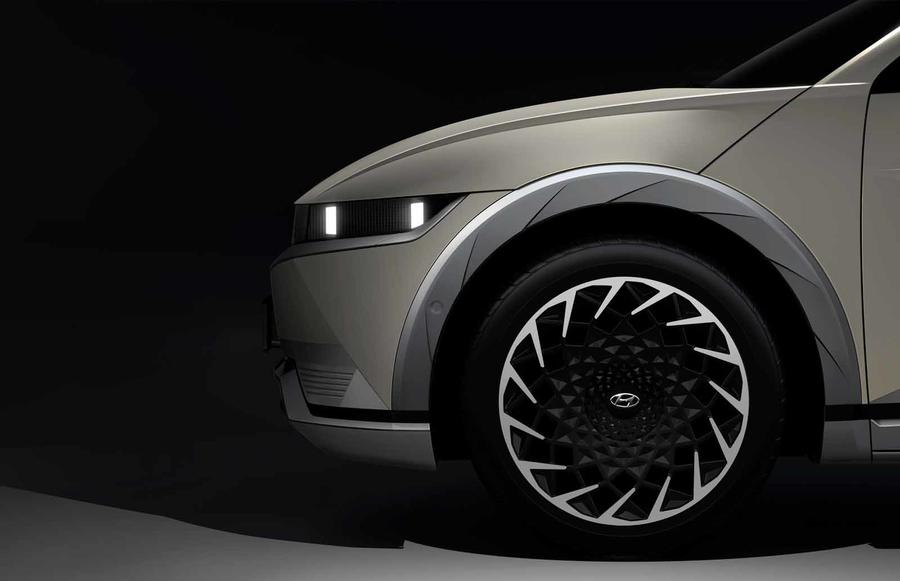 The final production designs of all three remain under wraps. However, Hyundai has previously said it plans for each to have a distinctive and different design, but they will all feature pixel headlights, as seen on the 45 and Prophecy concepts.

Each will be based around the new Electric Global Modular Platform, which is said to be capable of fast charging and a long range. With a long wheelbase and a flat floor, it also allows for each model to have a spacious interior, which, Hyundai says, will be modelled on “smart living rooms”.

The company also says all Ioniq-branded models will offer enhanced connectivity features "to integrate in-car and out-of-car experiences for a seamless journey".

The Hyundai Ioniq will not form part of the new model range, suggesting it will either be renamed or replaced entirely.

By 2025, Hyundai intends to launch 16 new EVs to increase its annual EV sales to more than half a million – the equivalent of just over 10% of its total sales in 2019. As a whole, the Hyundai Motor Group is aiming to achieve a 5% global automotive market share and transition to be a 'smart mobility solution provider', rather than purely a car manufacturer.

Log in or register to post comments
nimmler 13 January 2021
Stick to quality Toyota , koreans still cut corners, they used to be cheaply made cars for cheap prices but they think they can compete with Japanese so sell cheaply made cars for a premium .... the yanks hate hyndai/kias for their crap quality , look at the recent massive recalls due to engines blowing
.
We dumb brits blindly buy hundai kia because we are sheep who wants a big suv on pcp
vinylnutter 15 February 2021

Their warranties are surprisingly generous given they are crap in your opinion.

"Ioniq 5 EV" Hyundai Motor seeks to gain a five percent global share in the vehicle market and to become a smart mobility provider rather than just a car maker.

From the teasers, this is looking brilliant. Those mirrors look like camera mirrors... which makes me think this will be placed more as a premium product, which is a shame. I think we need more good-looking reasonably priced EVs. It would be a shame if this was much more expensive than an equivalent Kia Soul or KONA. Front end has strong mid-00s Civic vibes to it.