As the first pictures of Ford's second-generation S-Max are revealed ahead of its Paris motor show debut next month, we talk to the firm's director of exterior design, Stefan Lamm, about the task of following up the best-selling original.

How big a challenge was it to create a successor to the S-Max?

It’s an important product for the brand, after inventing the segment in 2006. We’ve sold 400,000 since, and it still mixes sportiness, dynamism and value like nothing else on the market. So under this premise it was a challenge, particularly when the current car still looks so fresh.

Would you describe it as a big visual leap for Ford?

It’s very clearly part of the new design we showed with the Evos in 2011 and will introduce with the new Mondeo. But as it is a European model, we’ve been able to put even more Evos in it. The S-Max shows Ford still has expertise in white space vehicles.

Why has the switchgear been reduced so much inside?

We’ve listened to feedback from our customers. We’ve overloaded centre consoles in the past, and are now simplifying it on our vehicles. Our interiors are now easier to use, they're simplified and more functional.

The S-Max is a European model in a range of global Fords. Would it be fair to call it your flagship?

Yes, you could say the S-Max is Europe’s flagship. It’s our model with the highest conquest rate for sales. Customers love it as it's prestigious and fun to drive, and there’s nothing else like it.

Could the S-Max become a global car?

It’d be hard to imagine a US customer appreciating this type of car, as the need to cleverly put a lot of people in a small car is not applicable there as it is in Europe.

In China, the car is considered too expressive, and the one child policy means there is no demand for such cars. But tastes are changing so rapidly there and people react very quickly to trends, so the markets are getting closer. Traditional attitudes are changing. 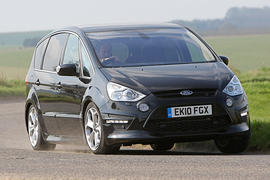 The Ford S-Max a highly accomplished car, but it needs to be cheaper when demand for MPVs is being eradicated by the high-riding SUV competition

15 September 2014
Am afraid if Mr Lamm set out to design a car that stands out from the rest and is the benchmark in that segment, then I'm afraid he has severely missed the mark!

When would the entire Ford board realise that in today's global society average is not enough anymore?

More and more fans of the brand are being kept away from returning by lessor known manufacturers with more current and value for money designs, part of the appeal to car ownership these days is the visual experience. I know the word corporate is overused these days but this corporate nonsense has to stop! The badge tells you the make, this stupid and idiotic same again look across manufacturers are what is driving loyal customers to the competition. Look at Hyundai, Kia, and even, Dacia have a definitive look across their model range without the ugly one face nonsense here- The S-Max was a standout car in its rights and now the grey suits at FORD is doing what they do best, offering their loyal customers average fro above average money, it is bad.

15 September 2014
So if the S-Max is the flagship, what are the ( larger, more expensive ) Galaxy and Edge supposed to be?

15 September 2014
They've simplified the dashboard by moving all the buttons to the steering wheel, no? Doh!