Skoda has revealed pricing and specification details for the new Enyaq Coupé iV vRS, the first electric car from the Czech firm to gain a performance variant.

Prices start from £51,885 and order books open on 17 February, with the first customer deliveries due for the end of July this year.

All cars gain sportier exterior styling over the standard Enyaq Coupé iV, with sports bumpers at the front and rear and black trim surrounding the windows and grille.

The model’s tailgate lettering, badges and air-curtain trim are also finished in black, and it gains a red rear bumper reflector - a feature seen on all other previous vRS models.

The Enyaq is also equipped with a full-length panoramic glass roof as standard.

It sits on 20in wheels (21in items are optional). As standard, the vRS also features Skoda’s Crystal Face grille, which lights up using 131 LEDs, and a full-width red reflector strip at the rear, in keeping with existing vRS models.

Similar to the closely related Volkswagen ID 5 GTX, the Enyaq Coupé vRS uses two electric motors – one on each axle – to offer 295bhp and 338lb ft for 0-62mph in 6.5sec and a top speed of 111mph, compared with 99mph for the standard versions.

It's equipped exclusively with a 77kWh battery, the largest unit offered with the Volkswagen Group's MEB architecture, offering a range of 309 miles. The identically powered and similarly shaped ID 5 GTX, meanwhile, manages 296 miles per charge.

Skoda says the sporty vRS can be charged at rates of up to 135kW, meaning it can be charged to 80% in 36 minutes. A full charge using a home wallbox will take around 13 hours. 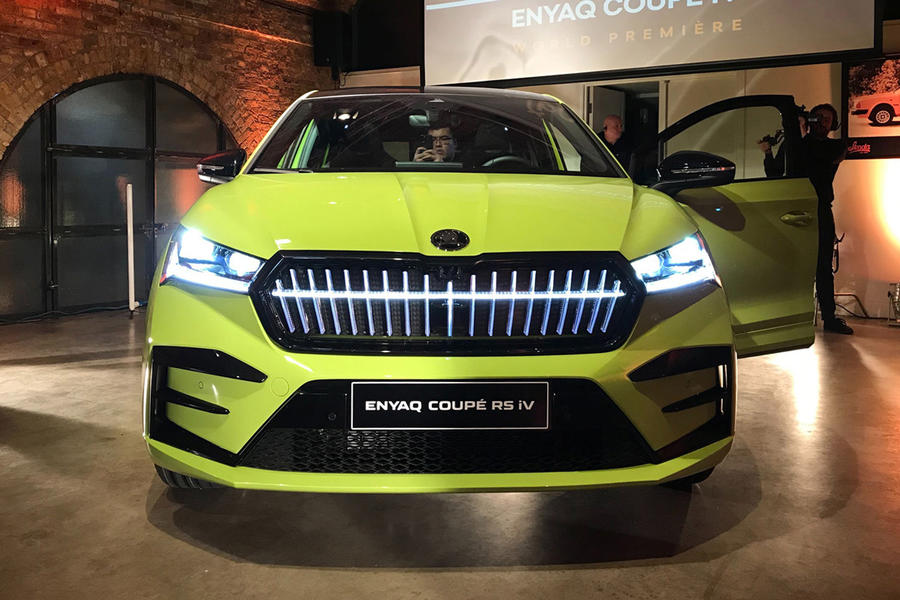 The vRS model features a sportier suspension set-up – also offered on Sportline trim models – that's 15mm lower at the front and 10mm at the rear. As shown here, the Enyaq Coupé vRS can also be optionally painted in a new shade of Hyper Green.

Inside, the vRS model can be specified with a bespoke Design Selection package, which brings black perforated leather seats with grey piping and contrasting stitching, a leather-style dashboard, carbonfibre-effect trim elements and vRS-badged sports seats.

Otherwise, it follows the standard Enyaq Coupé and full-sized SUV in receiving a 5.3in digital display and 13in central touchscreen.

All Enyaq Coupé models get a two-spoke, heated, multi-function steering wheel and are equipped with paddles for adjusting the level of energy recuperation under deceleration. Also standard for the vRS is a tri-zone climate control system.

The Enyaq Coupé is the fourth series-production Skoda to gain a vRS range-topper, following the Octavia, Fabia and Kodiaq.

It's a very nice looking car but about £15k overpriced. Why bother when its will be worth £20k in three years? The electric Audi version is much the same price but then again it isn't as nice looking as this Skoda.

Too bad you have been living in another galaxy. Enyaq iV has the longest waiting time among all EV models in the world, 10-13 months. Almost all the units that are ordered are Enyaq iV 80 which starts above 40,000 pounds in the U.K. People include various extra features and options and a slight majority of the U.K. consumers actually orders an Enyaq unit above 50,000 pounds. I am pretty sure that the waiting time for Enyaq RS will be even longer and most units that will be sold will be above 60,000 pounds.

WallMeerkat 10 February 2022
Maybe its the photos, but it looks all out of proportion, like a Micro Machines caricature of an Octavia. It'll obviously sell well due to being an SUV, but it's no looker, looks too squashed and top heavy.
View all comments (14)