The covers have been peeled off the Renault Mégane E-Tech Electric, a 292-mile family EV that that will play a crucial role in its bold Renaulution transformation strategy, at Munich motor show.

Built in Douai in Northern France, where the aim is to produce 400,000 EVs per year, the Peugeot e-2008 rival features a skateboard-style battery arrangement and is the first Renault to run on the Alliance's CMF-EV platform, following the Nissan Ariya.

The brand is hoping to build on the electric success it has enjoyed with the Renault Zoe: since that car was launched a decade ago, one in five Renaults sold in Europe has been electric.

The E-Tech comes with a choice of two power outputs for the electric motor (128bhp and 215bhp) and two battery sizes (40kWh and 60kWh). Claimed range is 186 and 292 miles respectively, while the quickest variant will manage 0-62mph in 7.4sec.

Weight-saving measures have been applied across the car. At 1624kg (for the biggest battery variant), it’s at the lower end of the weight spectrum in its class, thanks to aluminium doors and an electrically excited synchronous motor (EESM) that’s 10% lighter than that of the Zoe. An eight-pole arrangement in the motor also uses 45% less copper. 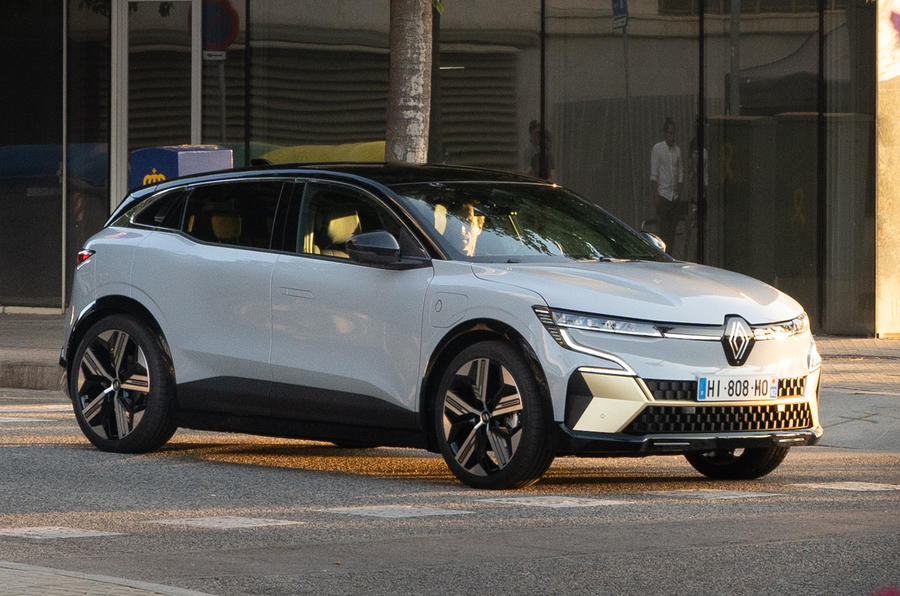 Weight is also part of the reason why Renault made the Mégane E-Tech Electric front-wheel-drive. Without having to run cabling and cooling to the rear, the French firm argues it has managed to shave vital kilograms from the car.

At 110mm deep, the water-cooled battery pack is claimed to be the thinnest on the market, helping to give the car a lower centre of gravity (90mm less than the combustion-powered Mégane hatchback) and improved practicality inside.

The exterior draws heavily on the Mégane eVision concept from 2020. Although the Mégane E-Tech Electric features Renault’s familiar C-shaped headlights, it gains an additional design flourish where the lower section of the C has been extended to run a reverse line of light along the top of the bumper.

The nose is dominated by Renault’s new corporate badge, which harks back to the art-deco style from the 1970s, while the rear lights feature a 3D-effect LED arrangement, as part of the new “sensual tech” on the new car.

Flush-fitting door handles are standard across the range (electric on the front, manual on the rear). Lower-spec cars get 18in alloys wheels and top-spec models get 20in items.

Although the EV is still recognisably related to the ICE Renault Mégane, its wheels have been pushed to the extremities, lengthening its wheelbase by 20mm to 2700mm and leading to greater passenger space (further helped by the flat floor that’s possible as a result of the floor-mounted battery). Overall, the car is shorter than its ICE namesake, thanks to reduced front and rear overhangs.

Inside, the new OpenR screen dominates, an L-shaped arrangement featuring a 12.3in instrument display and a 12.3in infotainment touchscreen, complete with integrated air vents (physical controls remain for the climate control). It runs Google’s Android operating system, meaning Google Maps, Google Assistance (with voice control) and Google Play are all standard. 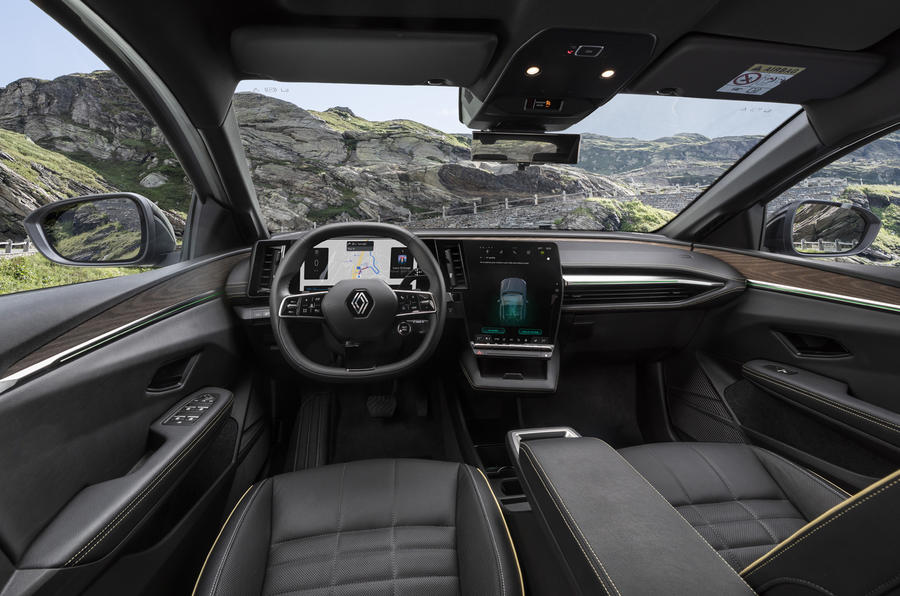 Thanks to anti-glare coatings on the screens, Renault claims it can afford to ditch the binnacle around the screen, leading to a clean look that needs none of the traditional shielding.

Renault is keen to emphasise the sustainability of the interior’s materials. While top-spec models come with leather, others get fabric seats made from 100% recycled plastic. A decorative wood finish, dubbed Nuo, is used around the dashboard and doors.

To ensure the driving experience matches the perceived quality and design of the cabin, the Mégane E-Tech Electric features new acoustic-isolation technology. Renault has packed foam in between the floor and battery to isolate the cabin from road noise and even minor elements such as the door bins have been lined with fabric to reduce any rattles.

There are 48 possible interior lighting options, with a thin band running around the door panels and dashboard. It’s also possible for the Mégane E-Tech Electric to mimic humans' 24-hour circadian rhythm by matching the colours to the time of the day, using cooler hues in the day and warmer red tones at night.

The Mégane E-Tech Electric is due in the UK in the third quarter of 2022. Prices and specs haven’t been finalised yet, but it’s expected to be competitive with cars such as the Volkswagen ID 3.

This would mean a starting price of around £30,000 – a figure that is, crucially, below the limit for the UK government’s £2500 electric car grant.

Looks and seems better than the VW ID3. Look how the mighty VW has fallen.

It looks OK, but is a let down compared to the concept, although nothing new there. The main change is the extra grille on the front, making the nose fussy, rather than the bold front of the concept, also meaning it does not match the sides so well.

This looks really nice. Design-wise it's obviously had inspiration from the RR Evoque. But I do like it. As with the others, I think this will do well against the VW ID3 which is abysmal inside - I sat in one a few months back and it just looked and felt like a toy car inside. What were VW thinking?!?!