Order books have opened for the new Mitsubishi Outlander PHEV, with prices for the hybrid SUV starting at £28,249.

That price includes the government's £5000 plug-in vehicle grant, and is for the entry-level GX3h Outlander PHEV. Two other variants, the GX4h and the GX4hs, are priced at £32,899 and £34,999 respectively.

In a break from convention which usually sees hybrid vehicles attract a significant premium over other models in the range, the entry-level PHEV is priced exactly the same as the diesel GX3 auto. Other hybrid models attract a £1000 premium over diesel options, but Mitsubishi says this is due to their added specification.

The hybrid SUV can achieve up to 148mpg on the combined cycle and emit 44g/km of CO2, meaning it is currently one of the most efficient SUVs on sale, and is also exempt from the London Congestion Charge.

Mitsubishi says the Outlander PHEV can cover up to 32.5 miles on electric power alone, with the range increasing to 512 miles when its four-cylinder 2.0-litre petrol engine is also used. The Outlander PHEV uses two electric motors alongside the combustion engine, each with around 80bhp, with a total power output of around 220bhp.

The car has a top speed of 75mph when running in electric-only mode, rising to around 106mph when powered by the combustion engine as well. Despite its hybrid technology, Mitsubishi says the Outlander PHEV is still "a fully competitive SUV with no compromises". The car also carries a five-star Euro NCAP safety rating.

The new Outlander PHEV is likely to become an important model for Mitsubishi, as the company says it is renewing its focus on SUV and MPV production.

Mitsubishi says customers can place orders for the Outlander PHEV from today, with the first customer deliveries expected in May. 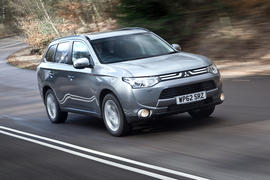 A leaner, cleaner Mitsubishi Outlander fights for a place in the crossover ranks

Okay, I am a family man with a dog, some fields and a 10 mile round trip commute to the station every day. Weekends are spent on longer trips or in a muddy field......
As long as the towing capacity is okay, this car might actually be perfect!
vinylnutter 1 April 2014

For a forum so ready to be critical of new cars styling this seems to be getting an easy ride?

I appreciate the value and so on but its a dull looking thing isnt it? Presumably relative affordability means no one cares what it looks like. I guess its too boring to actually be ugly though.

Exactly the sort of

Exactly the sort of 'disruptive' product the hybrid and EV market needed. I understand the petrol motor brings the batteries back to 80% charge within 40 mins. So one can leave the congestion of the city on electric, drive on petrol to another town or city, and revert back to electric. No range anxiety, no hassle, and it's entirely practical AND 4WD.
This is the sort of car that, once owned, people wont want to go back to straight petrols or diesels. Mitsubishi had better get their supply chains and dealers very ready for the onslaught. And Toyota had better get the price of the plug-in Prius down, at least £5K
View all comments (9)