BACK TO ALL NEWS
Currently reading: Mini plots radical new-look line-up but familiar hatch
UP NEXT
BMW opens door to M1-inspired electric supercar

Mini has nearly signed off the designs of its next generation of models, which include smaller and bigger models with a mix of petrol and electric power.

Design boss Oliver Heilmer, speaking to Autocar at the recent Munich motor show, promised an evolution in style for the “icon” of its range, the staple Mini three-door hatchback, but more radical designs are on the cards for the rest of the line-up, with clues provided by the recent Urbanaut concept.

The new Mini hatchback range will be split into two distinct models: a petrol variant built in Oxford and based on a heavily updated version of the existing car’s architecture; and a new electric version that will be slightly shorter and built in China only on a dedicated EV platform as part of a joint venture with Great Wall Motors. Both are due in 2023.

This Chinese joint venture will also spawn a new electric crossover, while the next-generation Countryman will be built in Germany and offered with petrol and electric power. 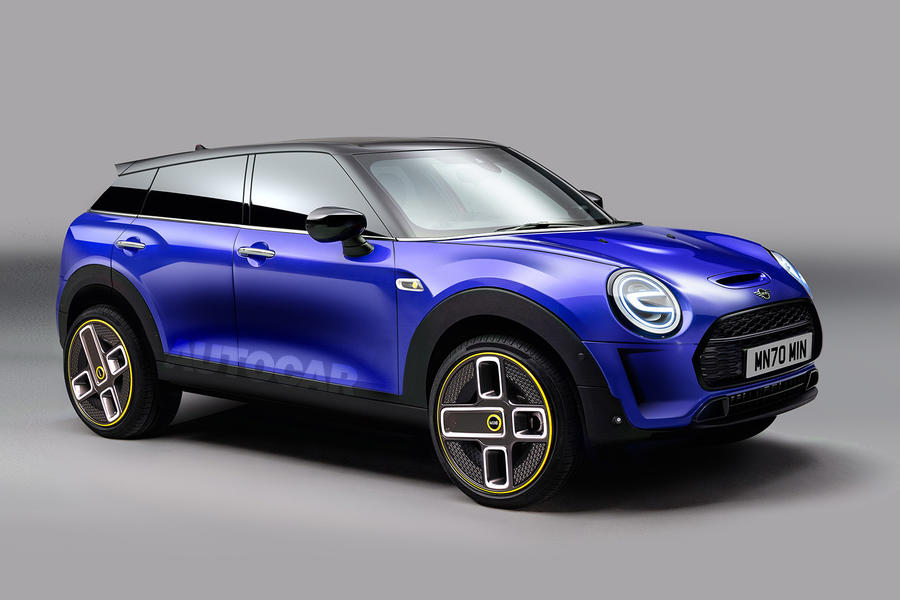 Other Minis understood to be planned but not yet officially confirmed include a small electric MPV dubbed the Traveller. A production version of the Urbanaut concept is also under consideration for later in the decade.

However, it is by no means a given that all of the current Mini models will be replaced. The range has both expanded and shrunk during BMW’s ownership of the brand in response to prevailing market needs, with differing executions and even bodystyles between generations, as with the Mini Clubman.

On the topic of how big the Mini range could grow, Heilmer said: “It’s a topic we [Heilmer and Mini boss Bernd Körber] discuss every two weeks.”

Heilmer added: “We talk of new models, different models, and first ask about whether it’s a brand fit and not just doing the car for the sake of it. Interestingly, we’re not exploding to eight to 10 [models]. It’s always around four or five. It’s always important to question models and ask if they will have a market in the future. We’re in that process now, not for the next four to five years but the years after that.”

As for the styling of the core model, Heilmer indicated it will very much be an evolution of the three-door hatchbacks created under BMW to date, as it’s Mini’s “icon” and “it’s set”. However, other models will get more revolutionary looks. 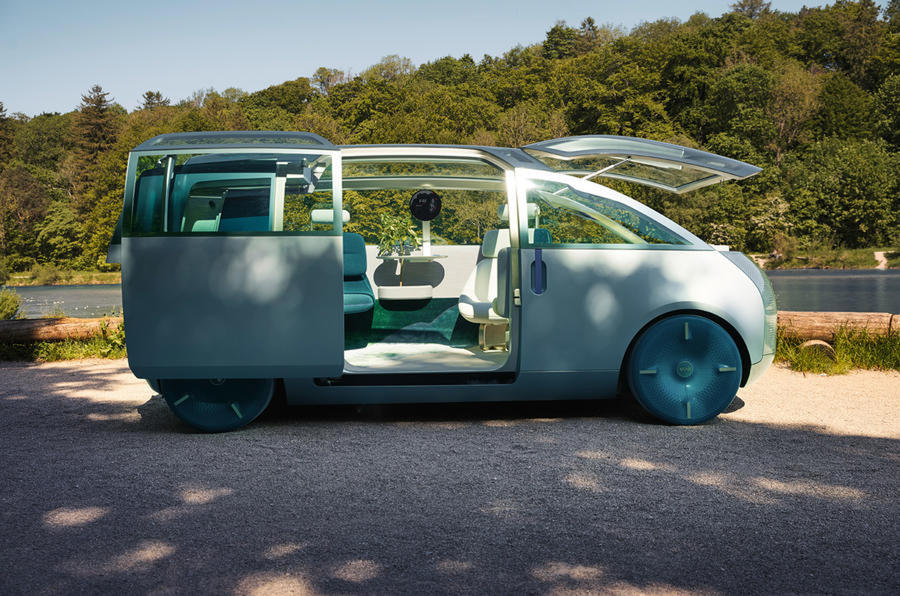 Heilmer also discussed comments made by Körber that the proportions of the next-generation hatchback will be altered to reduce the excessive front-end overhang of the current model.

“It’s a tricky topic. [Today’s car] is mostly driven by crash regulations,” Heilmer said. “I’ve heard a lot about the current generation, not least those proportions at the front, but we know where they come from. Without them, we can’t sell in certain markets.

“The next hatchback, and the EV with an EV architecture, does offer chances in terms of improving proportions and trying to make it shorter than the current generation while having more interior space. Which sounds like a contradiction!”

The next generation of Mini models could also be subtly shifted further upmarket, following on from the much more mature execution of its current models, but with a cleaner, reductionist approach. More fabrics of different textures and knits are set to be used instead of leather, which will be phased out, along with chrome, as Mini seeks to include only trim that is functional rather than purely for decoration.

“For the next-generation car, we looked at the beginning of Mini to see if there were any elements on it simply because they [the design team] wanted them. Any decoration? They didn’t. So let’s try to reduce again and focus on what’s necessary, but not too practical and without emotion. We will bring in warmth again with colours and fabrics. When you have fewer elements, it’s more important that the fabrics have warmth to compensate.” 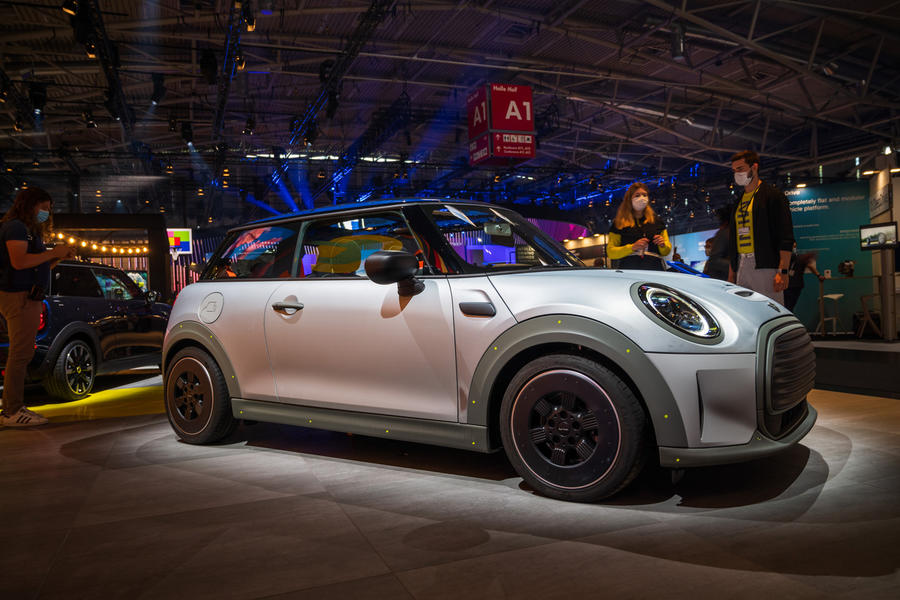 This minimalist approach to design was recently showcased by the pared-back Strip concept, developed in partnership with fashion designer Paul Smith. The car shed all non-essential trim elements and even its exterior paint in the name of sustainability and simplicity.

Heilmer added that the removal of leather “was a challenge” but is important in “having a big impact on CO2 emissions”. Meanwhile, chrome is something “you don’t need at all now”.

Although the models in Mini’s future line-up will all look quite different from one another, there will be “unifying elements that are obvious” between them, said Heilmer.

The next Countryman is set to be a sibling to the BMW X1 and will grow in size accordingly, but as for how big Minis will become, Heilmer said: “We don’t know what we will need in 10 years’ time, so it’s really hard to predict.”

He said he can never see a Mini close to five metres in length but size is relative between markets: “It’s a European phenomenon, being small. When you go to the US, they ask: why have we built the Countryman that small? You can resolve this looking at what models are in what markets.”

Asked whether the much- loved Rocketman concept still inspires Mini, Heilmer said: “Bernd and I are working on a project in A0 [the city car segment]. It’s a vision we have. But we don’t start from a size perspective. You look at customer expectations. People say the Mini Electric should have more range, but physics dictates the battery size between the wheels. To go smaller, you go smaller with range. That’s less than is acceptable today. It is a dilemma we have and is not resolved yet [in regards to battery range and crash requirements]. As long as these don’t change, it will be tricky.”

Leather and wood, nothing says premium and luxury like these two materials in an automobile. While there are even higher and lesser grades of these materials that have been used, depending on whether you are a mass market vehicle maker or a true luxury brand. But, what does recycled water bottles and cork say about luxury?! So Mini is planning to go MORE up market, moving away from leather and wood, useing 'more sustainable' materials like polyester, cotton, vinyl and leather-like fabrics?! Weren't those the same materials used in Ford's of the late 70s and 80s? Why would one want to spend even more money for a Mini mind you, for the same interior materials as that of and old Ford?! What am I missing here?

@Andrew1 - Appease the Brexiloons?  I'm not sure if you bothered to read the article, and why should you as remoaners aren't concerned with facts, but those back lights will either be the Union Jack or the Chinese Flag, they won't be an EU flag nor of an EU member state.

I hope it hasn't escaped remoaners attentions that this new car will not be built in an EU country but will be built in Britain and China. Remind me, BMW are German are they not? Even the Germans are building outside the EU.

Just thought I'd mention it.

Exactly! Remoaners don't like facts. The Mini is sold Worldwide and Countries outside the EU would be confused to have an EU Flag on the car (EU isn't even a Country) however would understand the Union Flag because of the Heritage of Austin Mini.

Andrew1 8 October 2021
Mini is STILL built in the UK, but the production started to move to China. Does that tell you anything? Dare to predict the future?

And besides, the profit goes to Germany. So keep buying them, clown, the German people thank you for your contribution to their GDP.

si73 8 October 2021
It's amazing how right the first BMW Mini looks now with the current looking so bloated by comparison, unlike others I do like the union flag tail lights, to me they're a bit of fun and look different and original. The move of EV production is a concern for the UK plants future though.
View all comments (9)