BACK TO ALL NEWS
Currently reading: Mini JCW GP to race in Nurburgring 24 Hours
UP NEXT
Rolls-Royce road trip: remembering the marque's epic seaplane racers

Mini is returning to top-flight motorsport to field a radical track-prepared version of the range-topping Mini JCW GP hot hatch into next month’s Nürburgring 24 Hours.

The race car has been created by Bulldog Racing, based near the Nürburgring engineering centre of Mini parent company BMW, and it will sport M Performance brakes (a first for a Mini), as well as a raft of other track-focused upgrades - most obviously a dramatic new aero package that includes an adjustable rear wing, a completely covered underbody, a rear diffuser and new front splitter.

Bulldog, which only started the project in September, has also added a racing cage, an endurance racing-friendly 100-litre fuel tank and bespoke racing suspension.

Up front, the same 302bhp turbocharged four-pot as the road-going JCW GP is still connected to an eight-speed automatic gearbox and a mechanical limited-slip differential, but a new race-spec exhaust system is fitted.

There is no word yet on whether the race car will inspire a road-going special edition. 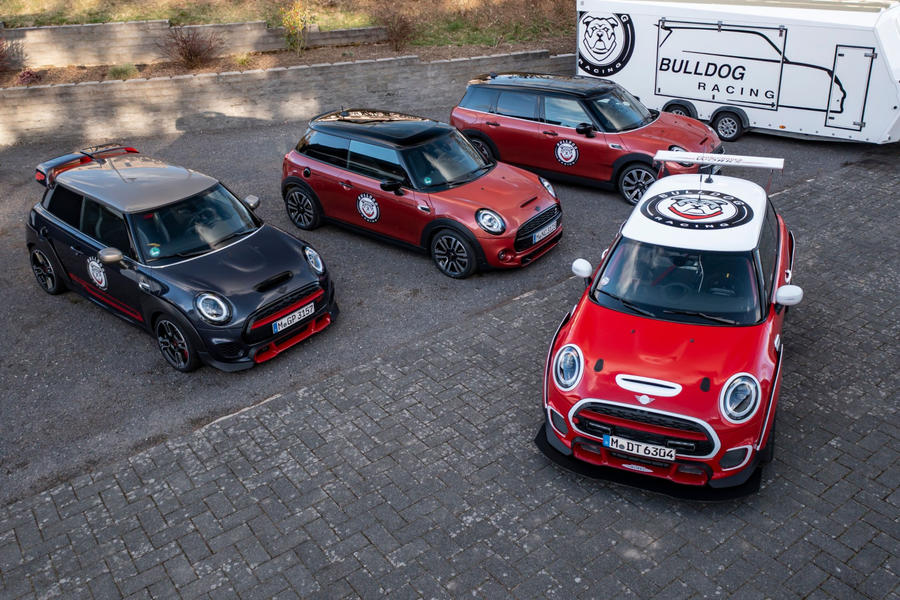 The team will be hoping this special JCW will take it to the podium at the 50th edition of the legendary event, which runs from 26 to 29 May. It last raced at the 2012 event.

This year, racing will take place across the track’s Grand Prix circuit and the Nordschleife in a 15.77-mile loop. A driver line-up has yet to be announced.

Mini has a successful past in competitive racing, mainly rallying in both WRC and Dakar - the latter with six overall victories in the past 10 years.

As it pushes for motorsport glory in its combustion-powered racers, though, Mini is also working on the electrification of its performance division, in 2020 revealing official pictures of a prototype for an electric JCW GPE.

The GPE will - as the name suggests - be styled similarly to the racy JCW GP, complete with prominent side skirts and a chunky rear wing.

The brand will continue to make combustion sports cars for the foreseeable future. Ex-Mini brand boss Bernd Körber confirmed previously: “John Cooper Works models with conventional combustion engines will continue to have an important role to play in addressing the wishes and needs of our motorsport enthusiasts around the world.”

Mini will launch its final combustion car in 2026.