BACK TO ALL NEWS
Currently reading: Mercedes-Benz GL63 AMG and ML63 AMG tuned by Brabus
UP NEXT
Lotus confirms new sports car, end of Elise, Exige and Evora in 2021

Brabus has unveiled two of its latest creations, based on the Mercedes ML63 AMG and GL63 AMG.

Applying its B63S–700 kit to the SUV models, Brabus has extracted even more potential from the production 5.5-litre V8 Bi-turbo AMG engine.

Power in the ML variant is up from 536bhp to 690bhp at 5300rpm, while the GL63-based model — which has an identical power output of 690bhp — adds 141bhp over the already potent 549bhp. Peak torque rises in both versions to an electronically limited 708lb ft from 2000rpm, to protect the tyres.

Mated to an AMG seven-speed transmission, the all-wheel-drive ML-based model accelerates from 0-62mph in 4.4 sec. At 4.6 sec, the heavier GL takes two-tenths of a second longer, with Brabus’s VMAX unit restricting both cars to 186mph.

Immediately evident under the bonnet are the intake and charge-air pipes — finished in gold heat reflection insulation. To increase power, the motor includes two Brabus turbochargers with a larger compressor unit, which generate a higher boost pressure over the production turbos.

To reduce negative lift on the front axle, Brabus designers developed an additional front and rear spoiler. The bodykit adds 60mm to the width of the M-class at the front and rear axle, with the GL gaining 80mm in width – consuming the bespoke Brabus 23-inch forged wheels.

A free-flow catalyst exhaust system replaces the standard production system, with interchangeable modes between a discreet 'coming home' sound and a more sporty exhaust note at the push of a button.

A special Brabus control module for the Airmatic air suspension of the ML and GL lowers the ride height, which is claimed to further improve the handling dynamics.

Inside, the tuner offers bespoke aluminium shift paddles for the steering wheel, along with a variety of wood and carbonfibre trim sets. The company hasn't yet released pricing information for the models. 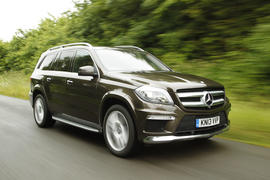 Why buy a lorry when you

Why buy a lorry when you could buy an E63 AMG?

... this drivetrain used with a Viano or Vito.

I love the SportVan range Ford have released over the years (albeit, you couldn't actually buy any!), and is fun inthe same way that putting a 2.0 911 engine in a VW Transporter is a good idea too.

I'd like to see a V10 Diesel engined VW Transporter T5 (from the Tourag/Phaton) and what about a V6 Diesel Peugeot/Citroen Van.

What else could you think of?