Hottest version of current E-Class bows out with limited edition; will return with a four-cylinder PHEV
Open gallery
Close

It has been revealed in the wake of two concept cars previewing the electrified future of Mercedes' performance division: the outlandish Vision AMG and a prototype for the next-generation Mercedes-AMG C63 PHEV. The E63 Final Edition serves as a swansong for the firm's pure-combustion sports saloons - a lineage that dates back to the W124-generation E-Class 'Hammer' of 1986, then the world's fastest saloon.

The V8 engine will continue to play a part in AMG's future - it is still available in the Mercedes-AMG GT 4-Door Coupé, produces some 577bhp in the hottest version of the new SL and is used in an 819bhp plug-in hybrid system in the new GT 63 S E-Performance – but it is set to be swapped out for an electrified four-cylinder unit in the next E63.

When it arrives, likely in 2024, the next-generation E63 is tipped to use a variant of the same PHEV system destined for its smaller C63 sibling. Officially detailed last week, this set-up comprises a 470bhp 2.0-litre petrol engine – the most powerful four-cylinder in series production – and a 201bhp electric motor on the rear axle for a total output of 670bhp.

If that PHEV drivetrain is carried over wholesale to the next E63, it will give it a 77bhp edge over the current V8 car – and could allow it to improve on its 3.5sec 0-62mph time and 180mph top speed.

But for now, in Final Edition form, the E63 soldiers on with the eight-cylinder lump, sending 603bhp and 627lb ft to both axles through an eight-speed automatic gearbox. 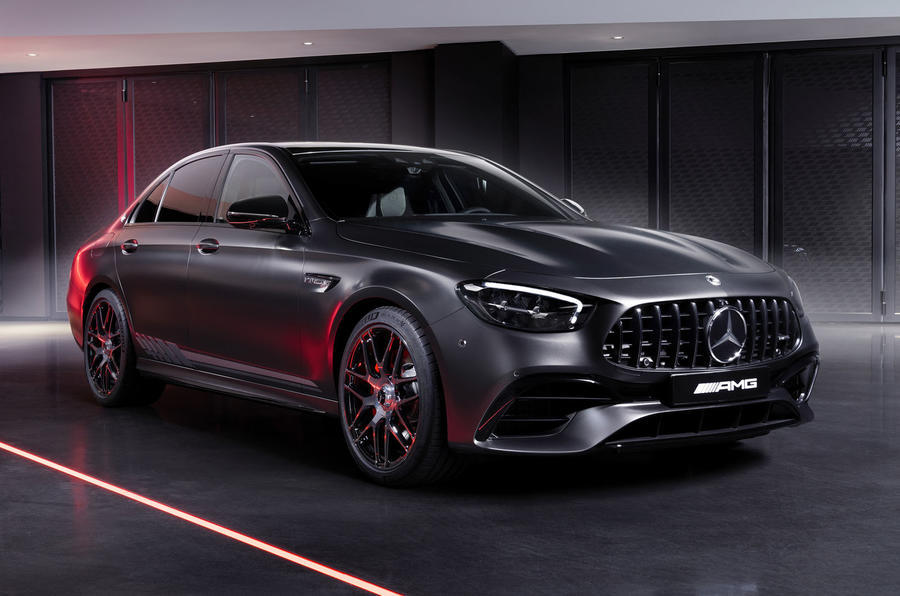 Just 999 examples of the run-out model will be produced, marked out from the standard car by bespoke matt grey paint and a distinctive black decal set - matched by black wheels, badging, exhaust pipes and exterior trim elements.

New hot Mercedes-AMG E-Class does the better part of what a fast saloon ought to crushingly well, but also leaves unexpected room for improvement

The bespoke treatment continues inside as well, with contrasting yellow stitching for the grey/black nappa leather seats and steering wheel. Final Edition badging has been applied to the centre console, along with a build number, and the door sills feature yellow illuminated AMG motifs.

AMG has yet to reveal how many examples will make it to the UK or how much the special edition costs compared with the standard car.