BACK TO ALL NEWS
Currently reading: Meet the king of car customisation - Afzal Kahn
UP NEXT
Nissan will build batteries in UK to sustain Sunderland plant

But as you get closer, you notice the ranks of Jeep Wranglers on the forecourt and a handful of big Range Rovers. Walk inside and you’ll encounter the Kahn workshop. It’s not huge, but the projects under way are impressive.

A customised Range Rover Sport is nearing completion and the amount of detailed work that has gone into its transformation is striking. It has been given wider wheel arches, new wheels and a Kahn grille and spoiler. But the whole interior has been retrimmed in red and black and it even has a pair of matching leather-trimmed child seats in the rear.

It is very eye-catching and has clearly been reworked to a high standard. Sure, it’s not something that I would have commissioned and it is much brasher and brighter than anything that a car maker would normally turn out.

But that’s hardly the point. Afzal Kahn is profitably meeting a desire for individuality among a few hundred wealthy people each year.

These buyers can commission a customised vehicle that is unique – and the trend among the most affluent car buyers to make their cars unique is something that has had super-premium car makers  – such as Aston Martin, with its new bespoke Q division – racing to meet demand. Kahn was very early to this trend. He started Project Kahn in 2004 and concentrated mostly on customising Range Rovers.

“I started off in the car business as a hobby,” he says. “I had been studying architecture but I pulled out. I wasn’t interested in building property. I was a petrolhead.”

By the late 1980s, Kahn had set up in a small factory building glassfibre components. “I gained experience in that small shop, making body parts for rally shops in the UK, arches and wings and [replica] Sierra Cossie parts,” he says. “By the time I was 19, I had 30 staff. But trends change and I decided to move into making wheels.”

Kahn took his own wheel design to Italy to have it manufactured and the demand for the finished product was overwhelming. “Kahn Design became the number one aftermarket wheel brand in the UK,” he says. Of course, this was the Max Power era and there was huge demand among young petrolheads for eye-catching and individual wheels.

With immaculate timing – a trait that seems to run through Kahn’s business life – as the Max Power trend died almost as suddenly as it had arrived, Kahn switched to the more serious business of modifying Range Rovers with a new business called Project Kahn.

Today, Kahn’s business employs about 100 people, including multi-lingual sales staff and 15 designers trained in the Alias computer design programme. He also has his own in-house photographic and video team.

In the past couple of years, Project Kahn has expanded into modifying and re-engineering Jeep Wranglers and Land Rover Defenders. Kahn estimates that he will sell well north of 500 vehicles this year, including 100 reworked Wranglers and about 200 Defenders.

He further expanded the business in 2012, established the Chelsea Truck Company and opened a London showroom in what was a defunct Sony retail unit at the western end of Chelsea’s King’s Road.

Again, Kahn had spotted a micro-trend, as the Defender became increasingly fashionable as daily transport in the centre of the capital.

Within this trend for automotive "authenticity", he spotted another opening by championing the Jeep Wrangler, buying the vehicles directly from the importer and adding “£7000 worth of Kahn kit and selling them for £30k, the same retail price as the standard car”. 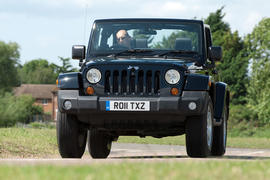 At the time of my visit, work was also well under way on an intriguing customised Defender. The customer had asked for the interior to be removed and the car’s floor and bulkhead to be lined in heavy-duty soundproofing. Once that was completed, it was due to have six individual sports seats installed in three rows of two.

Today, however, Kahn is rapidly progressing towards becoming a fully fledged vehicle manufacturer. One of the most interesting projects currently on the go is a re-engineered Defender called the Flying Huntsman.

The first example is currently being completed and has had 400mm of extra bodywork inserted directly in front of the windscreen. The extra space allows a 500bhp General Motors LS3 6.2-litre V8 engine (often found in the Chevrolet Corvette) and six-speed automatic gearbox to be fitted. The Flying Huntsman will also get modified brakes and suspension.

But even while that extraordinary vehicle is still being completed, Kahn has already “invested millions” in a new venture to build unique retro-styled sports cars. The Ant-Kahn business is a venture with Ant Anstead, who runs Evante, a specialist maker that builds bespoke sports cars ‘inspired’ by 1950s sports cars, particularly period Aston Martins.

Kahn has invested in a coachbuilding firm in the West Midlands and a composites firm in the south-east as part of the Ant-Kahn project. Ant-Kahn says the business has plans for everything from “coachbuilt special editions to series manufacturing”.

Again, this new venture seems right on time, as the price of real classic cars ascends into the stratosphere and even Jaguar is getting into the business of building ‘modern collectables’.

“It’s been an ambition to build my own cars, a dream,” Kahn says. “And between me and Ant Anstead, we have 50 years’ experience and the right skill set.” It’s all a long way from making replica Sierra Cosworth wings and designing wheels but, as ever, it seems like the right move at just the right time.

Anyone who judges someone by the choice of their car is 'one of them'. Petty, small minded, lower middle class jealousy and resentment. That's you Smellons.
Norma Smellons 2 September 2014

It is not about "personalisation" or choice, or even whether Mr Kahn has a successful business. His work is an abuse of the of the vehicle. Unless, of course, the buyer has bought it to simply attract attention. However, these buyers are drawn to Kahn, not the other way around. He is not simply fleecing these unfortunate people and chuckling to himself. No, he is OF them. He is one of them and is clearly a leading light in the world of grossly bad taste.
Macca 4 September 2014

Smellons do you not know

Smellons do you not know Jealousy is a disease?

Kahn's the King of Customisation whereas, you are the Queen of lower middle class jealousy and resentment.

Must we all be the same?

What's wrong with personalization? I don't know. Why do some of us pay sometimes as much as the car itself on accessories and optional extras? Kahn just seems to be capitalizing on our need to be a bit different from the next person. What's wrong with that?
Macca 2 September 2014

I agree with you. I don't

I agree with you. I don't need to care or worry about what other people spend their money on.
If you want to travel to Kahn H.Q and exchange your cash for a UK-built car with some aftermarket wheels and styling tweaks, then good for you if you can afford to. Most people cannot.

Kahn seem to benefit the UK economy, so they should be applauded.