BACK TO ALL NEWS
Currently reading: McLaren Elva now offered with a windscreen for 2021
UP NEXT
New 2026 Polestar 6 confirmed as 874bhp evolution of O2 concept

McLaren Elva now offered with a windscreen for 2021

V8 two-seater gains just 20kg with new screen, which makes it compliant in some US states
Open gallery
Close

McLaren has introduced a new version of its Elva speedster, equipped with a windscreen.

The new variant is aimed at customers "who prefer to have a physical screen" as opposed to the barrier of air created by the standard Elva's innovative Active Air Management System (AAMS). It will also enable the Elva to be road-legal in certain US states.

A dedicated engineering programme is claimed to have ensured the windscreen variant has optimised aerodynamic and handling performance, but it is otherwise mechanically identical to the existing car. There remains no roof, side windows or rear screen.

McLaren claims the new Elva variant weighs just 20kg more than the standard car, despite the introduction of automatic wipers, windscreen heating element, sun visors and windscreen washers. That's largely because the windscreen's frame is made from carbonfibre and the speedster's AAMS system has been removed.

Performance details are yet to be confirmed, but can be expected to closely match those of the existing Elva. Customer deliveries will begin towards the end of 2021. 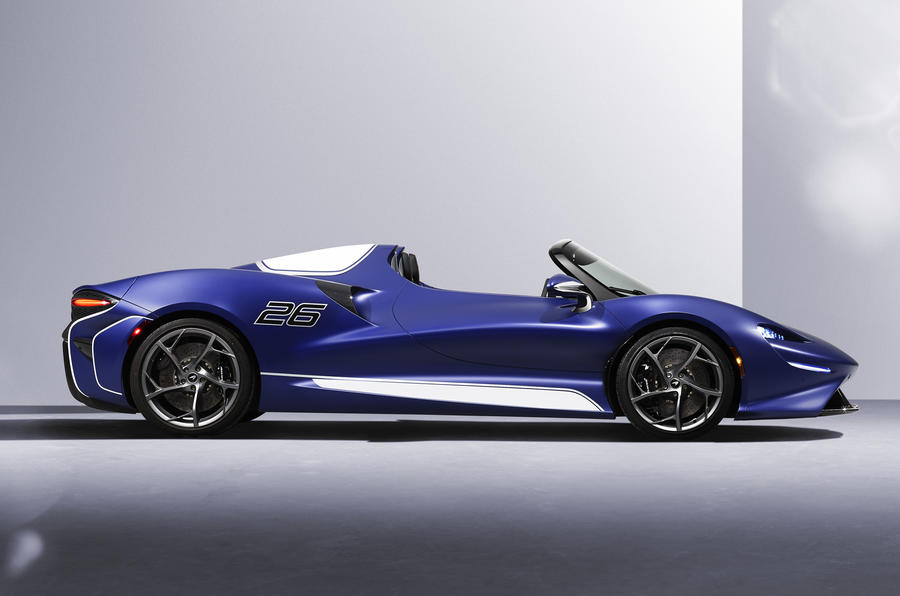 McLaren previously announced that it will produce just 249 examples of the ultra-exclusive Elva speedster, down from an initially planned 399 units, and has now reduced the build run again to just 149 units.

No official reason for the reduction has been given, but Autocar's sources suggested previously that McLaren over-estimated market demand for the model, hence the decision to reduce production numbers. The similarly conceived Aston Martin Speedster is limited to 88 examples, while Ferrari will build just 250 examples each of its SP1 and SP2 Monza roadsters.

The new machine joins the P1, McLaren Senna and Speedtail in McLaren's range-topping Ultimate Series model line, and is priced from £1,425,000 (including UK VAT).

McLaren claims the rear-wheel-drive Elva is the lightest road car it has ever produced. Powered by the firm’s 4.0-litre twin-turbocharged V8 engine, it is able to reach 62mph in 2.8secs and has a claimed 0-124mph time of 6.7sec – faster than the track-focused Senna.

The Elva name is taken from the East Sussex constructor whose chassis was used as the basis for McLaren’s M1A, M1B and M1C two-seat sports cars in the 1960s, which serve as spiritual predecessors to the new road car. McLaren has acquired the rights to the Elva name.

McLaren boss Mike Flewitt says the Elva is “a uniquely modern car that delivers the ultimate connection between driver, car and the elements”. It features a bespoke, lightweight carbonfibre chassis, with no roof, windscreen or side windows. 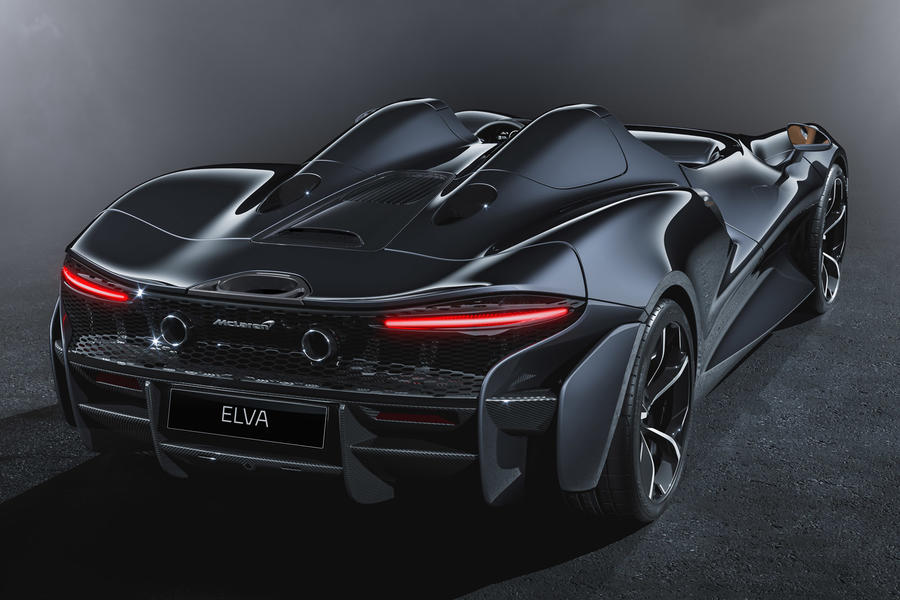 To shield occupants from the elements, McLaren has developed an Active Air Management System (AAMS). Automatically activated at speed, this guides air through a large inlet in the splitter at the front of the Elva’s distinctive low nose and out of a clamshell ahead of the cabin. As a result, the air is channelled up and over the occupants to create a ‘bubble’ of calm. A small carbonfibre deflector rises from the front of the bonnet when the AAMS is active to direct the air, which is deflected through a number of carbonfibre vanes across the bonnet.

When not active at low speeds, the air flow is diverted into two low-temperature radiators to boost their efficiency. McLaren claims the radiators boost the output of the engine by cooling the oil in the seven-speed transmission. The firm says the AAMS tech means helmets are not required but can be worn if preferred, while a fixed windscreen will be offered as a factory option.

As well as the open front, McLaren has made the cabin as open to the elements as possible with low sides and by minimising the size of the twin rear buttresses by the use of an automatically deploying roll-over protection system.

The car has a number of features designed to maximise aerodynamic efficiency, including air intakes on the rear buttresses and an active rear spoiler. The latter works in conjunction with an extreme rear diffuser, which features vertical fences designed to accelerate air out from under the Elva’s flat floor.

McLaren’s traditional V8 engine has been tweaked for improved power output with a revamped exhaust system, while the car’s chassis has been optimised to “maximise agility and driver engagement and feedback”, with electrohydraulic steering and unique software settings and springs.

McLaren has yet to cite a weight for the car, but says that, as well as the open-top design, it has been minimised where possible through the extensive use of carbonfibre. The front clamshell is 1.2mm thick and is formed from a one-piece panel, while the large side panels are also single pieces. The small gullwing doors are carbonfibre too, mounted via a single hinge. 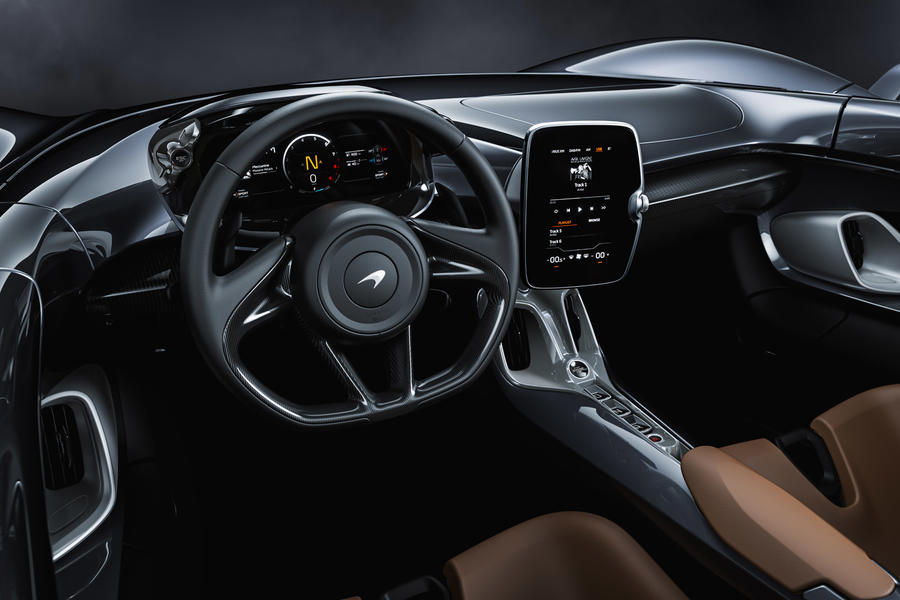 The sintered carbon-ceramic brakes measure 390mm, and McLaren claims they are the most advanced to be fitted to one of its road cars, with increased thermal conductivity that allows for reduced brake duct cooling.

McLaren has used a “blurred boundaries” design principle for the interior, with a carbonfibre element flowing from the rear buttresses into the cabin to serve as the central armrest between the driver and passenger.

The dashboard has been designed for a clean ‘pebble-like’ feel, with the only instrument cluster moving with the steering wheel to ensure optimum visibility.

The Active Dynamics controls are mounted on that instrument cluster for the first time in a McLaren. A central 8.0in touchscreen is used for many of the car’s functions, including a track telemetry system.

A small storage compartment, designed to house helmets, is located beneath the rear tonneau. 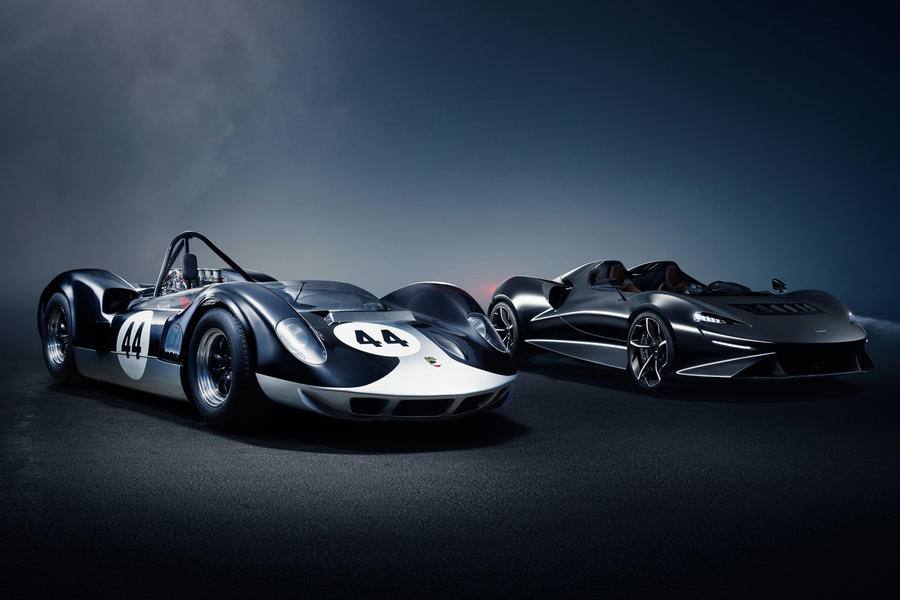 The story behind the name

Bruce McLaren established his eponymous team in 1963, developing the M1A sports car, powered by a mid-mounted 340bhp 4.5-litre V8, to race in both Europe and North America.

The car was quick, setting a number of lap records, and attracted much interest from potential customer teams. With his staff limited, McLaren teamed up with Elva to outsource production.

That led to the McLaren-Elva M1A, M1B and M1C, developed between 1964 and 1967. By that time, McLaren had developed the M6A, which the founder and team-mate Denny Hulme used to dominate the 1967 Can-Am Championship.

A great shame it's only a left hooker, or I would have ordered one, in Gulf colours as per F1 team in Monaco last weekend. Great result Lando!

I have to admit that I'm a bit torn on this one.   No screen one is a great looking car, but if I owned one I'd want the windscreen.   Not that it is bad looking with a screen, both Elvas looks superb.

Too late to ask McLaren for a retractable windscreen?

I wonder if McLaren are charging extra for the windscreen? At £1.4M one would expect a windscreen to be a no-cost option!