BACK TO ALL NEWS
Currently reading: Mazda favours smaller batteries for upcoming EVs
UP NEXT
Eurocell chooses Netherlands over UK for first battery factory

Mazda says it will never build a ‘big-battery’ electric car, because it believes such vehicles are less environmentally friendly than even conventional diesel-powered models, judged over a whole energy life cycle.

Speaking in Portugal at a prototype test drive of the upcoming MX-30 electric car, Joachim Kunz, head of product development and engineering at Mazda Europe, said the firm has studied the CO2 emissions of building a vehicle “from extraction to disposal”.

Citing a study by a Japanese university using the average CO2 output of the European grid, Kunz said an EV with a 95kWh battery has such a disadvantage of embedded CO2 at the point of sale that a new Mazda Skyactiv diesel car will probably be more CO2 efficient across its lifetime, even if the EV’s battery pack is not replaced at 100,000 miles. Kunz said Mazda has calculated that an EV with a 35kWh battery makes more sense environmentally because, by around 50,000 miles, such an EV starts to show lifetime CO2 savings over a diesel Mazda.

Another claimed advantage of the MX-30 concept is that it has more range per kWh of battery than many rivals, thought to be because the smaller battery weighs much less than a larger unit, reducing the amount of energy needed to move the vehicle.

Most car makers agree that the average European driver covers around 35 miles per day so Mazda argues that the MX-30 will have enough range for the majority of owners as well as being a genuinely “low-CO2” vehicle across its lifetime.

Kunz told Autocar that for longer-distance drivers who want a low-CO2 vehicle, Mazda is currently developing a new range-extender system that uses a compact rotary engine. An early static prototype of such a system was on display at the MX-30 driving event in Portugal. 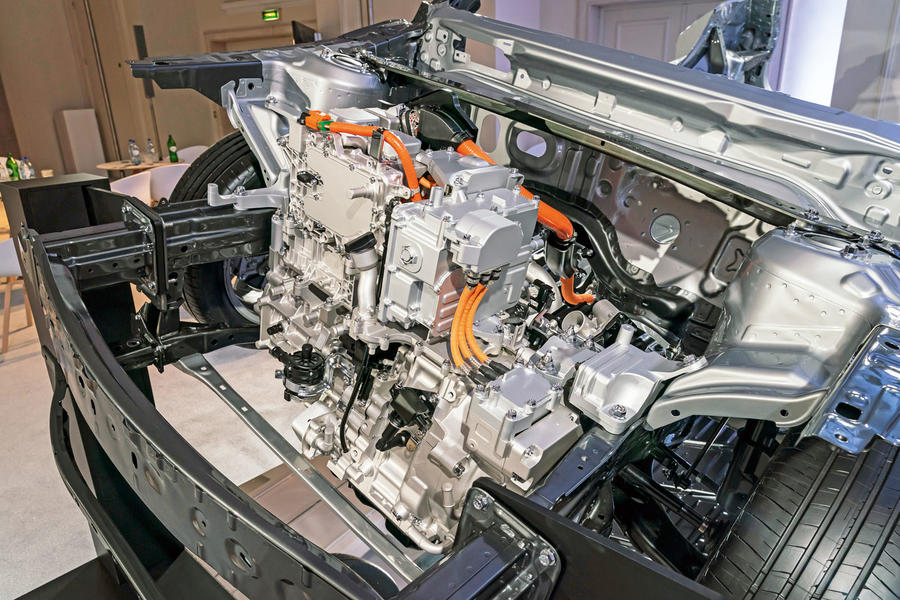 Kunz said it is too early to reveal any technical details about the future rotary engine. He added that specific future legislation – such as permitted fuel tank size – will guide the power and range of the production version.

However, Autocar can reveal that the engine, generator and control electronics fit easily into the right-hand side of the engine bay, which it shares with the electric motor and its control equipment. The engine’s rotor housing is just 75mm deep and the engine uses a single spark plug and is started by the generator.

Mazda’s engineers have also tuned the torque delivery of the MX-30’s electric motor to be less frenetic than is often the case with EVs, reasoning that they want the MX-30 to feel less like a dramatic change from a typical internal combustion engine vehicle.

Ultimately, however, the Japanese brand is showing some bravery in disputing the prevailing wisdom around battery-electric vehicles, by insisting that a modest 35kWh unit is as ‘green’ as a vehicle battery is likely to be.

Mazda CX-3 removed from sale 'for the moment'

"Mazda’s engineers have also tuned the torque delivery of the MX-30’s electric motor to be less frenetic than is often the case with EVs, reasoning that they want the MX-30 to feel less like a dramatic change from a typical internal combustion engine vehicle."

I have no reason to doubt that the average European driver covers 35 miles a day but using averages to justify range is surely flawed. Most of my driving would probably involve round trips of less than 50 miles but once, maybe twice a month I, like many others, travel a lot further. A range of 130 miles would make those journeys very frustrating. I understand Mazda's logic - heavier batteries take more energy to move, but that range feels too low to me. Perhaps it works in a small city car like the Honda E, but in a larger more family oriented vehicle I am not convinced.

So much BS in Mazda’s

So much BS in Mazda’s approach:

The first and most basic is embedded emissions, they will have been very selective in the CO2 costs of building this hypothetical new car most likely assuming that all materials and all battery fabrication is done in China on coal not in Arizona on solar as it is for a Tesla.

A long range electric car is around 10% or less heavier than a petrol car, it mostly contains similar materials which have a similar climate impact.

The second flaw is using average European emissions and also assuming that these emissions are fixed. The UK has doubled the share of low carbon electricity on the grid in less than 10 years. New Evs will add demand to the grid (and therefore money) which will stimulate new generation capacity most of which will be low carbon.

Third flaw in the whole approach is that if you have a smaller battery pack you need to charge and discharge it more frequently and to a greater proportion of its capacity. It won’t last as long and you will need more physical battery per KWH or storage. Currently Teslas are demonstration 500,000 mile drive train reliability and pushing that to 1,000,000 miles with newer vehicles.

Forth flaw is that as we move towards the potential for self-driving taxis we actually want 200-300 mile ranges to allow a full day of operation.

Fifth flaw at current rates of battery cost decreases a smaller battery pack become pretty irrelevant anyway, Tesla’s cost per kWh at cell level is less than $100 by 2030 that is likely to be less than $50 or less than $2500 for a 50kWh. A petrol car cannot hope to compete with those economics.

Basically Mazda has failed to invest in battery pack development and battery supply chain. They are now trying to spin this as a superior design decision not a lack of capability.