BACK TO ALL NEWS
Currently reading: Lotus Exige S gets new six-speed automatic option
UP NEXT
Audi A9 E-tron: electric luxury saloon due in 2024

Lotus has unveiled an automatic version of its Exige S sports car, which will go on sale in January 2015.

Lotus' boss, Jean-Marc Gales, said: "By introducing a paddle-shifted automatic, we have expanded the Exige product range to make it more accessible to customers worldwide.

"Now, customers who are more accustomed to two pedals and automatic transmissions can enjoy the unbelievable performance and handling of the Exige S without compromise."

The Toyota-sourced gearbox is the same six-speed torque convertor-based unit used in automatic 'IPS' versions of the Evora, but it has been tailored to suit the Exige S.

Lotus says that the new self-shifting Exige is in the final stages of testing. Official performance figures are yet to be announced but the company states that the new car will "exceed the manual variant in performance".

The automatic, which retains the same 346bhp 3.5-litre supercharged V6 engine found in manual versions, has so far proven as fast as its three-pedal counterpart around the Hethel test track.

It has also completed the 0-62mph sprint in 3.9sec, which is 0.1sec quicker than the manual Exige S. 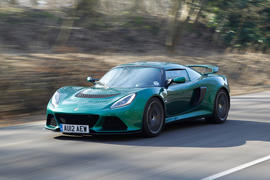 How would this fare if it was a new model?

25 October 2014
I suspect sales of this car will be virtually zero, because it's seen as an old design produced by a brand which has little value. But how would it fare if it was a brand new design sold by a respected brand? Is the car any better than say the similar concept Alfa Romeo 4C, which as a 15 year head start, but the same period less development? Or are they both hopelessly flawed cars in the modern world? I'd like to see Lotus turn around its fortunes, but I suspect that the world has already made its mind up. Perhaps Lotus should go back to its roots and sell this model as a kit car because selling ready made cars against the likes of Porsche and Toyota clearly isn't working.