BACK TO ALL NEWS
Currently reading: Infiniti M hybrid in 2011
UP NEXT
New 2021 Toyota Camry brings styling and interior tweaks

Infiniti’s new flagship M saloon, which arrives in the UK next September, will be followed on sale in 2011 by the Infiniti M35 hybrid.

The M35 uses two clutches, one for the drivetrain and one to disconnect the engine from the motor, in the same style as the Cayenne hybrid.

Infiniti's seven-speed gearbox doesn't use a torque convertor, though, as they claim it is more responsive this way - it is the only executive class hybrid to work in this way.

The hybrid powertrain won't be used in any other car until the next generation FX is launched.

The Infiniti M - on sale this year - will be sold in V6 petrol and diesel forms.

Infiniti — Nissan’s luxury division — is pitching the M as a direct rival to the BMW 5-series and Mercedes E-class but won’t release any pricing information until nearer to the car’s launch.

Like the other cars in the Infiniti range, the M is based on the company’s rear-drive FM (front-midship) platform, which places the engine behind the line of the front axle. The car uses double wishbone suspension at the front and a multi-link rear axle and it has speed-sensitive power steering.

The M’s styling was previewed at the Detroit show earlier this year and has very low aerodynamic drag, with a Cd rating of 0.27. Although the structure is a steel monocoque, the doors, bonnet and bootlid are made of aluminium.

Infiniti designers have made huge efforts with the quality of materials in the interior and have even used university researchers to engineer new soft-feel plastics technology. Infiniti also says the 2.9m-long wheelbase is longer than most rivals’ to help ensure “plenty of room for five adults”.

The first model to go on sale will be the M37. It is powered by a 3.7-litre V6 petrol engine that is good for 316bhp and 266lb ft. All M models get a seven-speed automatic and steering wheel paddles. The engine and transmission response can be set by driver to Standard, Eco, Sport and Snow modes.

Active four-wheel steering will also be an option on certain M models. 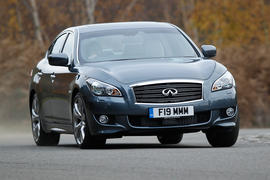 Quite like the lines (or rather curves) of the exterior, but the interior is still rather naff, especially the mantelpiece-style clock and the names written on the seat backs. Trying a bit too hard in my view.

- i love it, its cool, its really good looking, it intelligent and a well completed design.

-the interior is really nice, like the XF, the interior does not look the same as the MB and BMW and Audi - which to me all look pretty much the exactly same

-i really really like it! - it will sell very well!

VelSatis23 wrote:
Sort of looks cool, but who wants to be seen in a batmobil-lookalike? I don´t know, do I like it, or do I not?

All those people who wanted the Mafioso chic of the 300C. Look at me, look at me! I do think it is interesting that you can get a coupe, a convertible, a mid sized saloon, a large saloon, a mid size soft roader and a big soft roader .... all with the same chassis and engine! Is this a first to have a complete range of identical vehicles?? This is more VW than VW!!!