BACK TO ALL NEWS
Currently reading: Ineos Grenadier interior revealed with focus on luxury and utility
UP NEXT
New Lotus electric sports car to use Britishvolt batteries

Ineos Grenadier interior revealed with focus on luxury and utility

Official interior pictures of the Ineos Grenadier, Sir Jim Ratcliffe’s rugged new body-on-frame 4x4, have been issued at last — showing an impressively novel design, clearly built for ruggedness and timelessness, but guided at all times by the highest levels of practical logic.

Grenadier has a genuine hose-it-out cabin, crafted in ultra-durable, stain-resistant materials, and it even features drain holes in the floor to stress its ability to cope in the most arduous conditions. However, designer Toby Ecuyer says one key mission has been to show that extreme durability need not carry any penalty in comfort and refinement.

The Grenadier’s fascia is dominated by a flat, high quality, centrally-mounted switch and dial panel of switches and dials, its design clearly influenced by aircraft and ship layouts. There is an impressive-looking matching panel in the roof.

Switches are a combination of push and toggle designs, both extremely durable and sufficiently widely spaced to allow operation by gloved hands. They are more clearly labelled than in other cars, and the roof panel includes customisable auxiliary switches, pre-wired so an owner can easily bring them into action. 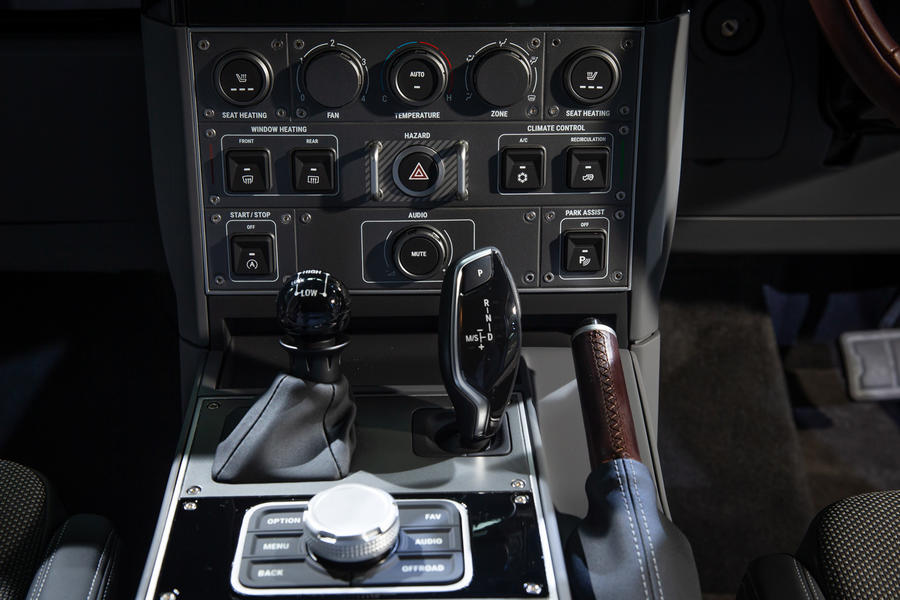 Ecuyer and the Ineos team have also been at pains to show that rugged vehicles need not lack capability: the Grenadier has a 12.3-inch central touch-screen to handle infotainment functions (backed up by an iDrive-style rotary button mounted between the seats). Even so, they have taken all opportunities to simplify the car: in pursuit of reliability Grenadier contains around two-thirds fewer microprocessors than rival 4x4s.

Navigation, for example, is handled by Apple or Android smartphone functions so software is always up to date, though there is a built-in pathfinder function that allows drivers on expeditions to find their way back to where they started.

Toby Ecyuer’s mantra is, like the vehicle, simple and straightforward. “We want Grenadier to have everything you need and nothing you don’t. It just works.”

Ineos Grenadier: meet the designer of the controversial off-roader

The Ineos Grenadier has to beat pick-ups, not Land Rover Defender

A lot of people seem a bit confused (and/or dismayed) about the positioning of the start/stop button and the fact it's way over by the passenger. Hopefully this helps... the starting and stopping of the engine is actually controlled by a key in a traditional ignition. No keyless or push-button start here. The start/stop button on the dashboard that we can see is the button to enable/disable the automatic start-stop (and it's a pretty common placement for those).

A Brexiter's nostalgic wetdream. Interior reminds me of those 1970s hi-fi systems with its multiple meters, levers and switches.

MarkII 7 July 2021
Might I suggest that before making ill-informed comments, the critics actually go visit the Ineos Grenadier website and learn about the car.
To correct some of the inaccuracies - in no particular order:
* The car does NOT have a start/stop button it uses a key.
* Unlike the overly complicated raft of SUVs, this utilitarian vehicle has fewer electrical components and switches in place of touch screens, for simplicity and durability.
* From what I've seen/heard of the switchgear, it seems robust and fit for purpose.
* The overhead switches for off-road functions are separated from the other controls with good reason.
* The 'Toot' horn is for a short polite horn sound to alert other road users (such as cyclists) - I don't necessarily agree with the need for this feature, it it's name but see it as a quirk of the designers approach.
* Sadly production will be in France but in what was a very well designed Mercedes facility, which offers greater economies than developing a new factory. The involvement of Magna Steyr in the prototyping, bodes well for the final product.
* JLR chose to take a different path with the new 'Defender' (in name only) and left a gaping hole in the market - who can blame Jim Ratcliffe for filling it, or attempting to manufacture a vehicle at a suitable price point for its intended market?
Go have a look at the Ineos Grenadier website before writing this vehicle off.
Based on my experiences with a Range Rover Sport and Velar, I wasn't that impressed with JLR's abilities.
View all comments (25)