A hybrid-electric Peugeot 308 R hot hatch will be launched to rival the Ford Focus RS, in the process becoming Peugeot's new halo model and taking a role previously occupied by the discontinued RCZ coupé.

Speaking to Autocar, new brand boss Jean-Philippe Imparato said he would “love to launch something even faster” than the 308 GTi hot hatch.

When asked whether there was room for a model above the 308 GTi, Imparato said there was. “There is space for something,” he added. “I don’t have a solution but I am on it.

“We are very involved in competition sport, like Dakar, and we don’t want to lose this space with our cars. I don’t think we will develop an RCZ replacement. On each level of our range — 308, 208 — we will have something impressive in performance. Do we work on a new RCZ or on the fact that the next 308 will be a beast?”

While a so-called 308 R could use a pure petrol engine, it’s most likely to use the powertrain seen in the 308 R Hybrid concept revealed at the Shanghai motor show last year. That car produced 493bhp and 538lb ft from its petrol-electric hybrid powertrain, which consisted of the 266bhp 1.6-litre petrol engine from the 308 GTi (pictured below) mated to two electric motors. With its power sources combined, the car had a 0-62mph time of 4.0sec — 2.0sec quicker than the 308 GTi 270 and 0.7sec inside the time of a Ford Focus RS.

Comment: how a hybrid Peugeot 308 R could top its class 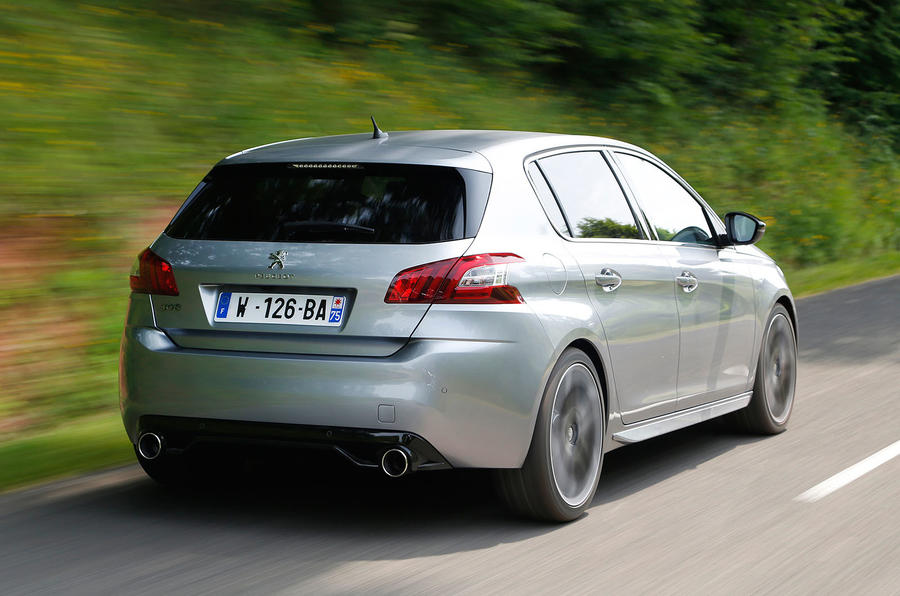 The concept also used a six-speed automated manual transmission, but whether this would carry over to a production model is unclear, with hot hatch buyers preferring manual gearboxes.

The project is likely to be part of an upmarket repositioning for Peugeot announced by PSA Group boss Carlos Tavares in April this year. The ‘Push to Pass’ strategy tasked Peugeot with becoming “the best high-end generalist brand” and a direct rival to Volkswagen. Today the average Peugeot is sold for around 2.4% less than an equivalent VW, but by 2018 that gap should drop to 1.3%, before overtaking VW by 0.5% by 2021. Tavares also revealed that 25% of profits on the 308 line come from sales of the GT and GTi models

Imparato said: “Customers want high-level cars and are ready to pay for them if residual values are solid.” He cited residual values of the new 3008 increasing by between 8% and 17%, adding that he felt “really positive” about Peugeot residual values in the UK. He also said the second-generation i-Cockpit interior, which is standard on all cars, is a key part of Peugeot’s so-called ‘upper strategy’.

This piece is speculation based on a couple of quotes. Firstly Peugeot's man says they will be making a hotter 308. Thereafter follows Autocar's guess at what that may mean. It's guesswork but not unreasonable.

Then another Peugeot boss says they are aiming to move upmarket - aren't they all - so Autocar infer that Peugeots will become more expensive than Volkswagens over the next five years. That is entirely unreasonable guesswork. Nobody sensible would be paying more for a French car than an equivalent German one. It'd take a damn sight longer than five years to turn around that situation, they'd need to establish a reputation for reliability, longevity and holding value, over the same amount of time it has taken Volkswagen to gain their own.

In case you haven't noticed they are already nailing Vw to the wall in the reliability department for the last 4 years. Vags are living off heritage check the surveys all the recent 08 ending Peugeots have been proving rather reliable so 5 years isn't that farfetched as you may think. Only brand snobs aren't sitting up and taking notice
bowsersheepdog 6 January 2017

A few years figures mean nothing in terms of reputation. Volkswagen has been trusted on reliability since the Type 1, and that won't change on the basis of figures which probably don't don't have much credibility themselves compared to personal experience and first-hand reporting from trusted relatives and friends over the course of people's lifetimes.
nwdw12 25 November 2016

I'm using it now and it's awesome! I've signed up for my account and have been bringing in fat paychecks. For real, my first week I made $302 and tthe second week I doubled it and then it kinda snowballed to $120 a day.

And no trousers...he doesn't mention anything about chassis upgrades/will it be 4wd?

RS competitor? This is a joke.