BACK TO ALL NEWS
Currently reading: Hot petrol Honda CR-Z planned
UP NEXT
Electrified car registrations overtook diesels in Europe for first time

Honda is set to provide its CR-Z with an all-new, turbocharged four-cylinder petrol engine option as part of plans to broaden the compact coupé’s appeal in key world markets, including the UK.

Currently available with just the one engine option — a hybrid that mates a 112bhp 1.5-litre petrol engine with a 14bhp electric motor — the CR-Z is earmarked to receive an all-new turbocharged 1.6-litre powerplant that is currently undergoing development at Honda’s Tochigi R&D centre.

The new engine, which is also planned for the Jazz, Civic and Accord, forms an integral part of a downsizing program instigated at Honda. With forced induction and Honda’s patented VTEC-i fully variable camshaft timing system, it is aimed at providing the performance of a typical 2.0-litre engine from a capacity of just 1.6 litres.

Autocar sources in Japan say the new engine is likely to come in two guises: a standard 160bhp model and a highly tuned 200bhp version aimed at matching the now defunct 2.0-litre VTEC engine in the Civic Type R. This more potent spec is likely to form the basis of a CR-Z Type R, tentatively due out late next year.

Plans for more than a hybrid engine for the Japanese Car of the Year come as sales of the two-door coupé have started to sag in the firm’s all-important home market.

Honda first hinted that it was planning to add another petrol engine when it unveiled the CR-Z Hybrid R concept at the recent SEMA tuning show in Las Vegas. Unlike the proposed production version, though, that car ran a turbocharged version of the CR-Z’s existing 1.5-litre engine rather than the new 1.6. 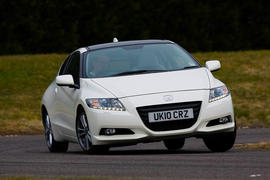 Sounds great. A 200 bhp 1.6 turbo in this should be all the performance it ever needed. And losing the hybrid setup will save a fair bit of money and weight, so the high performance version need not be much more expensive. Adding an LSD would be perfect. I hope the rear suspension is upto it all though.

As a seperate issue. I wish Honda would drop the dark tinted rear side window. It just looks tacky.

[quote artill]As a seperate issue. I wish Honda would drop the dark tinted rear side window. It just looks tacky.[/quote]

Totally agree - I was hoping this fashion might have started to pass by now. It can hardly be called privacy glass - have you seen the space in the back of one of these?

I think its a good idea to develop the CRZ range, its hybrid engineering is its least convincing feature.

I hope they attempt to separate themselves from the legions of other 1.6 litre turbos on market - it feels like they are bit late to the party really. I guess the current hybrid setup was a no-go for anything more than 130 bhp.

I swear I remember Honda saying they weren't going down the turbo-charging route (or direct injection route) because they could get just as decent performance and economy from their i-vtec and minimising friction. Maybe that was just because they knew they'd missed the boat? Now just give it independent rear suspension and make that 4 cylinder howl and they'll have a winner on their hands.

They need to lose the stupid wing but otherwise good news. It might turn out to be a CRX replacement after all.

[quote RoadWalrus]I hope they attempt to separate themselves from the legions of other 1.6 litre turbos on market - it feels like they are bit late to the party really[/quote]

That may well stand them in good stead - having the luxury of seeing who has done well and not so well. I for one am very pleased - having fond memories of a CR-X and a Prelude from the early nineties hopefully this one will pick up the baton for great handling little front drivers.

[quote theonlydt]I swear I remember Honda saying they weren't going down the turbo-charging route (or direct injection route) because they could get just as decent performance and economy from their i-vtec and minimising friction.[/quote]

Was it the diesel engine that changed their mindset to turbo-charging?

Hope they do put this in the Honda Jazz. A 160bhp Jazz would be a great prospect. May need some chassis work though.

[quote RoadWalrus]I hope they attempt to separate themselves from the legions of other 1.6 litre turbos on market[/quote] I wonder if they're contemplating a return to F1 now that's going down the 1.6 litre 4 cylinder turbo route as well from 2013.

A CR-Z with an all new 200 bhp 1.6 litre turbo does sound like a good idea, this is also as said recognition of our love of the hot hatch car. I also agree with those who say that the car should lose the ugly kid glass, this is a pointless waste of time and money and makes 3-door cars look like small vans.