BACK TO ALL NEWS
Currently reading: Hennessey Venom F5 completes aero testing programme
UP NEXT
The cream of the crop? Bentley Flying Spur vs Mercedes S-Class

American company Hennessey has completed the aerodynamic development of its Venom F5, the car it hopes will claim the top speed record for a production vehicle by breaking 311mph.

The programme - led by chief engineer John Heinricy - began in February, and the F5 exceeded 200mph despite its 6.6-litre, twin-turbocharged V8 being limited to 888bhp – half of the 1792bhp it should deliver when let loose.

The next phase of development will focus on handling over the summer, with work on acceleration, high speed stability and braking to follow in the autumn. The car will make its public debut on 22 May at Amelia Island Concours d’Elegance.

“For more than 40 years, I’ve been developing high-performance vehicles, yet nothing compares to the Venom F5,” said Heinricy. “We’re making excellent headway in our mission to deliver a world-class hypercar to our customers that handles superbly, while managing its phenomenal power and speed with finesse.

“Every part of our development program is focused on making the Venom F5 the best it can be before customer deliveries start towards the end of this year.” 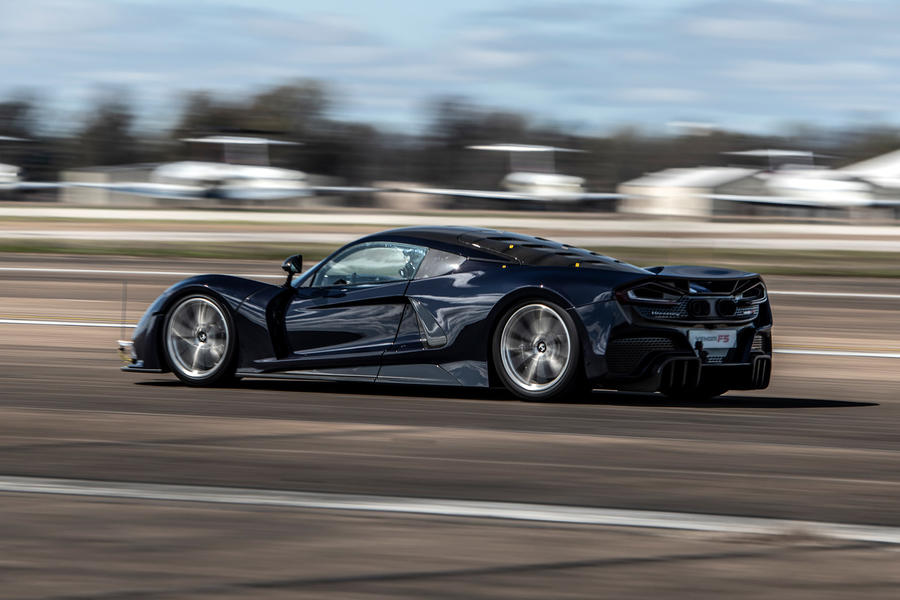 According to company founder and CEO John Hennessey, almost all of the 24 examples of the Venom F5 slated for production have been sold.

The Venom F5 is Hennessey’s first fully bespoke hypercar. First previewed with a styling model in 2018, the carbonfibre-bodied coupé is differentiated from the ultra-low-volume Venom GT of 2011 by utilising an in-house platform instead of a heavily modified Lotus chassis. Autocar has seen the first fully constructed car in the UK ahead of its dispatch to the US.

Hennessey claims the combination of its colossal engine power and a 1360kg dry weight help make the one of the fastest road-legal cars in the world – possibly even the fastest. The company predicts a 2.6sec 0-62mph time, a 4.7sec 0-124mph time and an 8.4sec 0-186mph time.

Named after the highest rating on the Fujita hurricane strength scale, the F5 Venom uses a carbonfibre monocoque, built by KS Composites in the UK, that weighs just 86kg naked. A rear tubular aluminium subframe contains a 6.6-litre overhead-valve Fury V8 built by Hennessey in Texas with a cast-iron block, aluminium heads, forged connecting rods and pistons and a crank and camshaft made from billet-steel.

This is boosted by a pair of ball-bearing turbochargers with 3D-printed compressor housings that can deliver up to 1.58bar of boost.

In addition to the headline power figure, which is delivered at 8000rpm, Hennessey claims a torque peak of 1193lb ft, with at least 1000lb ft available from 2000rpm through to 8000rpm. 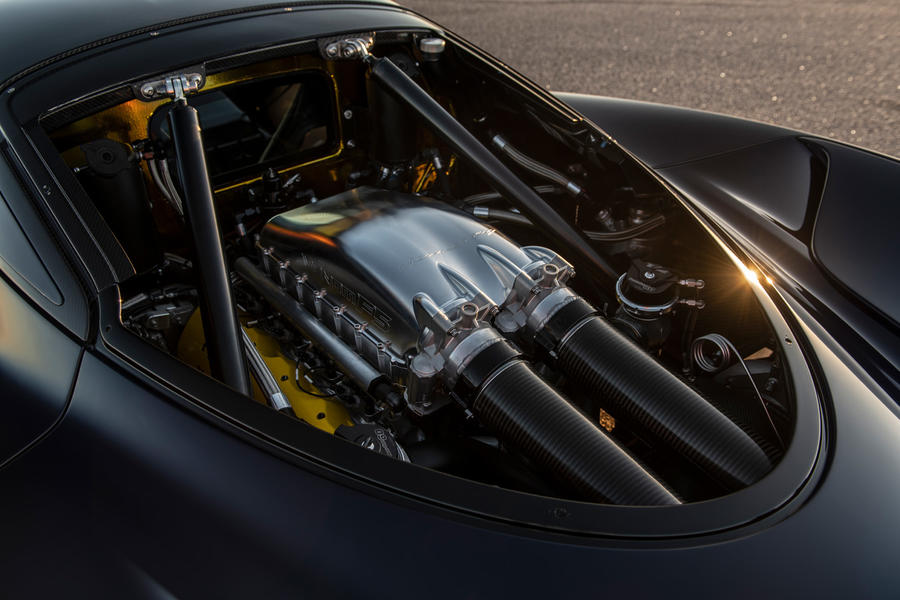 John Hennessey says the use of a pushrod engine was due to the more compact dimensions and lower centre of gravity, as well as his company’s expertise in extracting power from them; Hennessey Performance Engineering already offers a twin-turbo 1200bhp upgrade for the C8 Chevrolet Corvette.

Power is delivered to the F5 Venom’s rear wheels by a CIMA seven-speed single-clutch automated transmission and a limited-slip differential.

The obvious differences between the production car and the concept are mostly aerodynamic, with the loss of the raised wing and the use of a substantially larger diffuser. Unusually for this class, there are no active aero elements. 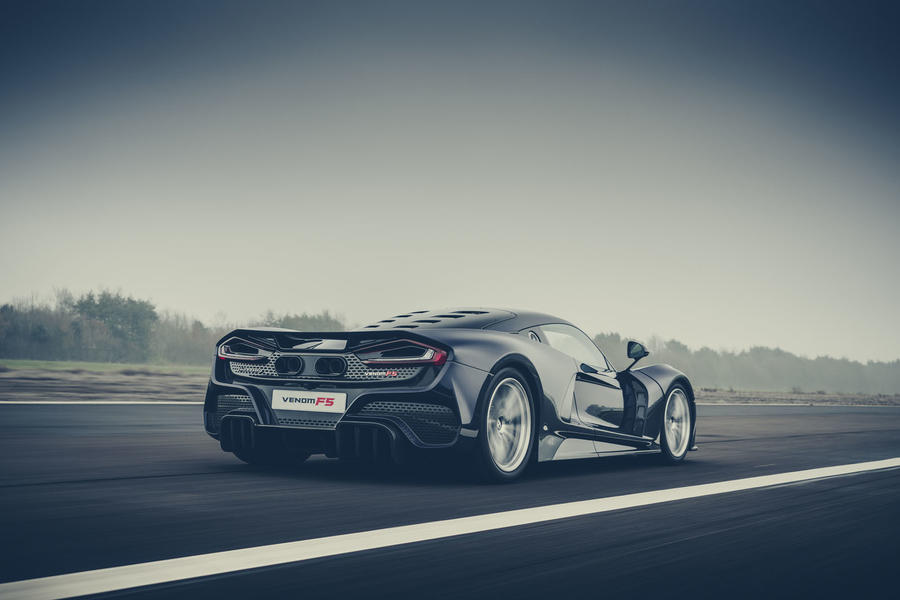 Beyond that, the car looks very similar to the concept, with butterfly doors and decent passenger space for a hypercar, with the well-finished combination of leather facings and carbonfibre trim. There are some other impressive details, including the fact that the entire rear section of the car is made from one piece of carbonfibre with CNC-machined vent holes.

Despite its enormous performance, the F5 Venom has been designed to stay drivable at lesser speeds and to cope with roads and tracks as well as it does v-max runs.

The double-wishbone suspension uses passive dampers, but these can be adjusted for bump and rebound, and the car also offers five selectable driving modes, including Drag for acceleration and F5 for ultimate speed.

While the first F5 Venom has been built in the UK, the others will be assembled in Texas – and offered in Europe under IVA homologation. With production limited to 24 cars, each carries a pre-tax price of $2.1 million (£1.58m). 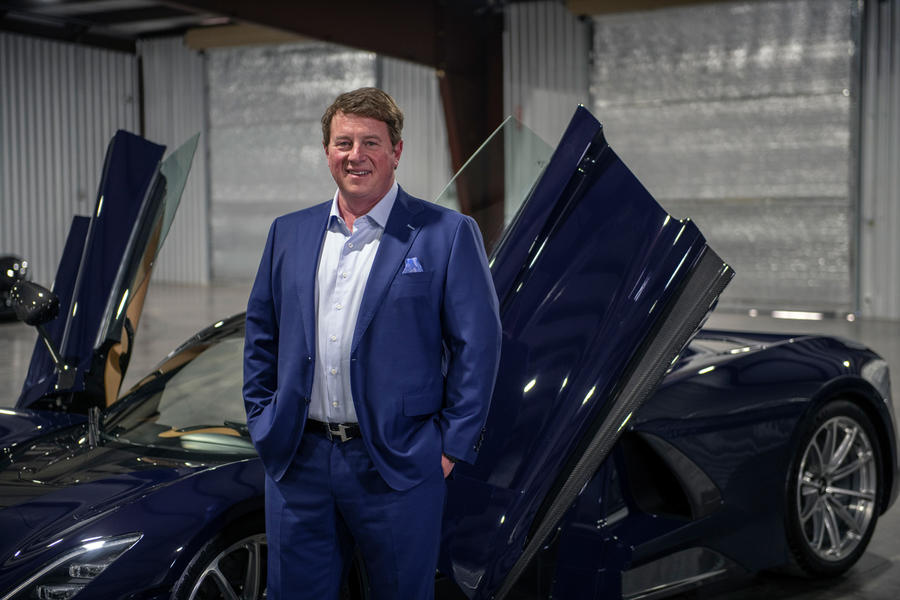 John Hennessey is adamant that the F5 Venom will be “considerably faster” than the old Venom GT, which recorded a 270.49mph two-way average at the Kennedy Space Center in 2014. His plan is to prove its performance with what he hopes will be a recognised production car speed record. The issue, he admits, is the limited space available on the Nasa runway.

He said: “From end to end, from the grass to the swamp, it’s 3.4 miles. The GT was still accelerating when it had to brake. I reckon with the F5, in ideal conditions, we will be approaching the 300mph range there, but I don’t know if we have enough room to beat Bugatti’s number [304.77mph] down there. I think if we’re going to try for absolute v-max, we’re going to have to do it on a road somewhere.”

The top fastest-accelerating cars in the world 2020

The Fujita Scale measures, or used to, tornados - not hurricanes. Hurricanes are measured by the Saffir-Simpson scale. Tornados are now officially measured by the Enhanced-Fujita scale.

Yes, amazing in gear times, but, really, most are seen at Runway days where cars like these are V maxed , some never see a public road even, the price isn't that out there for cars like it, and I'm sure some of us would be quite happy with 250 BHP in a 1350kg car because, you could use it everyday, I know it's great to see, read about the advancement of car design.

There's a lot of work and engineering gone in to this, and i do respect that, but, meh. Pull your trousers up and put the tape measure away.