BACK TO ALL NEWS
Currently reading: First drive: Aston Martin V8 Cygnet
UP NEXT
Sorry, wrong number: the forgotten problem of car clocking

What happens when you squeeze the running gear from a Vantage S into the shell of Aston Martin's short-lived city car? We've tried the resulting madcap creation
Open gallery
Close

The gloriously unlikely Aston Martin V8 Cygnet, which features the running gear and suspension of the previous-generation Vantage S crammed into the bodywork of the Toyota iQ-based city car, starred at this year’s Goodwood Festival of Speed.

The very existence of this machine is proof of Aston Martin's sense of fun, but it’s also a manifesto for its Q by Aston Martin bespoke division and a demonstration of the scale of commissions it’s willing to take on for affluent clients.

The firm first toyed with concepts for a V8 Cygnet years ago, and when an Aston Martin collector heard of them, he asked if it would be possible to actually build a driveable, road-legal one. The Q division was given the task and the resulting car, delivered after a 10-month development programme, is proof of a commendable reluctance to say no.

Two Cygnet bodyshells left from the development of the original car were used in the V8 project. The finished project combined one of those shells with the front and rear subframe of the Vantage, including the twin-wishbone suspension. In place of the Cygnet’s 97bhp 1.3-litre four-cylinder engine is the 4.7-litre naturally aspirated V8 from the Vantage S. 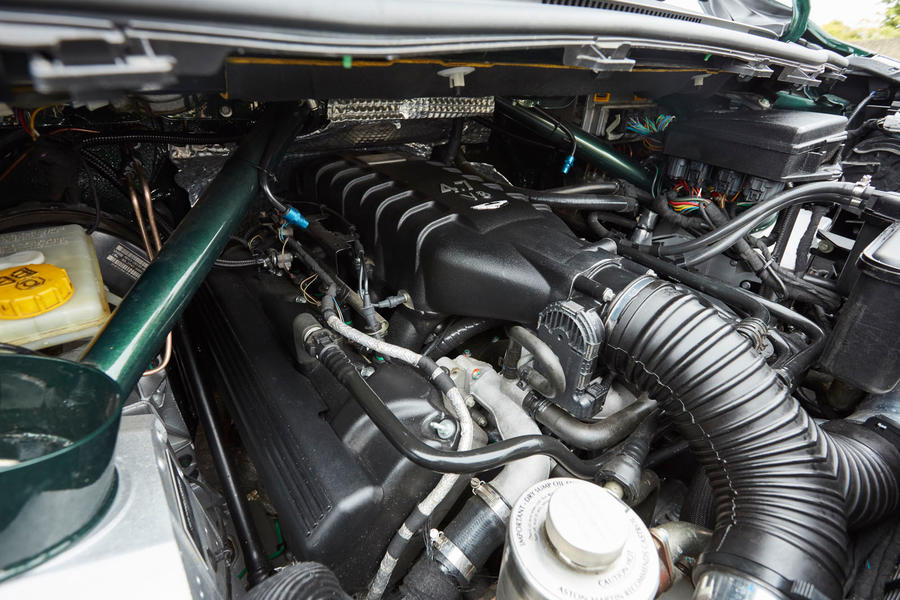 Getting the Vantage engine and subframe to fit was a substantial challenge, involving moving the front bulkhead about a foot backwards. But the more demanding task was fitting the rear-mounted Speedshift automated single-clutch transmission, with a barely-there torque tube connecting the two ends of the drivetrain.

Wheel-arch extensions cover a dramatically expanded track, but the other bodywork has barely changed, with only slight modifications to the front and rear bumpers.

On the road, it's much less compromised than it should be. The new bulkhead location has created an offset driving position, with the pedals sitting in what soon turns out to be an angle-cricking position.

With the V8 engine crammed in, the Cygnet has become a strict two-seater, having a pair of Recaro buckets in place of the original four-seat layout. The interior features lots of carbonfibre trim, including on the dashboard and door cards. Plus, it has gained Vantage instruments and Aston's trademark R/N/D gearshift buttons in a neat dashboard binnacle, whereas the standard Cygnet made do with a Toyota shifter.

There's even a traditional Aston fly-off handbrake, albeit between the seats rather than mounted next to the door. 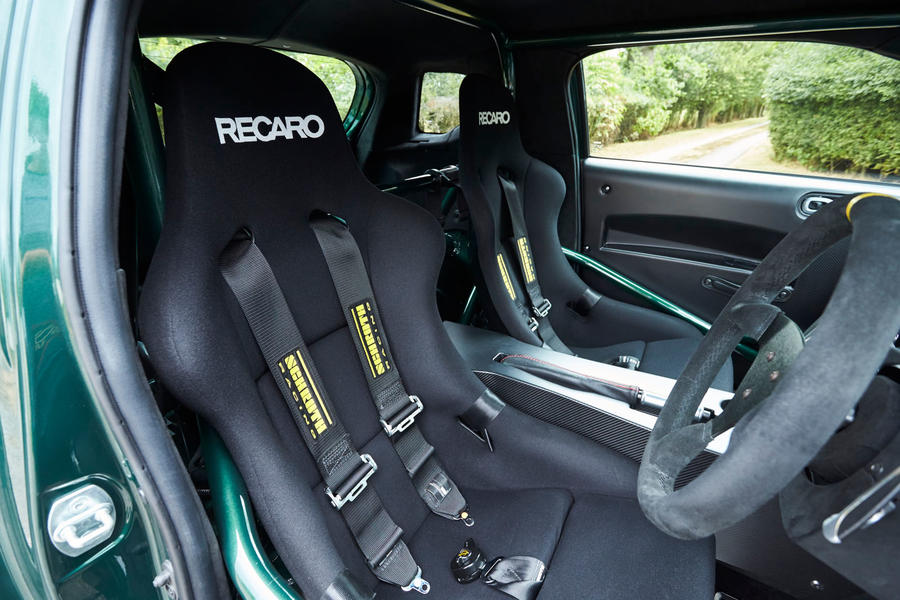 The snarling soundtrack is barely silenced V8, but the heads it turns are soon wearing looks of incredulity at the sight of the steroidal Cygnet that's the unlikely source of the commotion.

Performance feels strong: Aston says that the Cygnet would have the legs on the Vantage in a straight drag race, because its 250kg-lighter kerbweight gives it a 0-60mph time of 4.2sec. You'd need to have swallowed a handful of brave pills to get anywhere near the quoted 170mph top speed, though.

Acceleration feels forceful and the dynamic cues are very similar to the donor Vantage, with similarly weighted steering and a nicely proportional throttle response. The gearbox is snappier and less well-mannered than it was in the Vantage S; the development team admit that persuading it to work in the shorter, lighter Cygnet was one of the biggest challenges, and it gets confused if instruction through the steering wheel-mounted paddles is delivered too quickly.

The ride is firm, sometimes uncomfortably so on rougher surfaces, but the Cygnet feels impressively stable considering the relative size of its wheelbase and its track.

There's no traction or stability control, apparently at the owner's request, with overlapping throttle and a big steering input provoking the lightening sensation of an impending slide – not something to be investigated further without some serious run-off.

The car feels more stable under braking than you would expect, given that some of those who drove it at Goodwood reported some twitchiness under big stops, but under even enthusiastic road use it pulls up without the need for steering intervention. The hardest thing to get used to on normal roads is the difference between the apparent width of the cabin and how far out the wheels actually are.

It’s no surprise to report that the V8 Cygnet is always loud, and, despite the best efforts of its air conditioning system, it stayed sticky in moderate summer heat. But that really doesn't matter. This glorious one-off will always be the coolest car everywhere it goes. 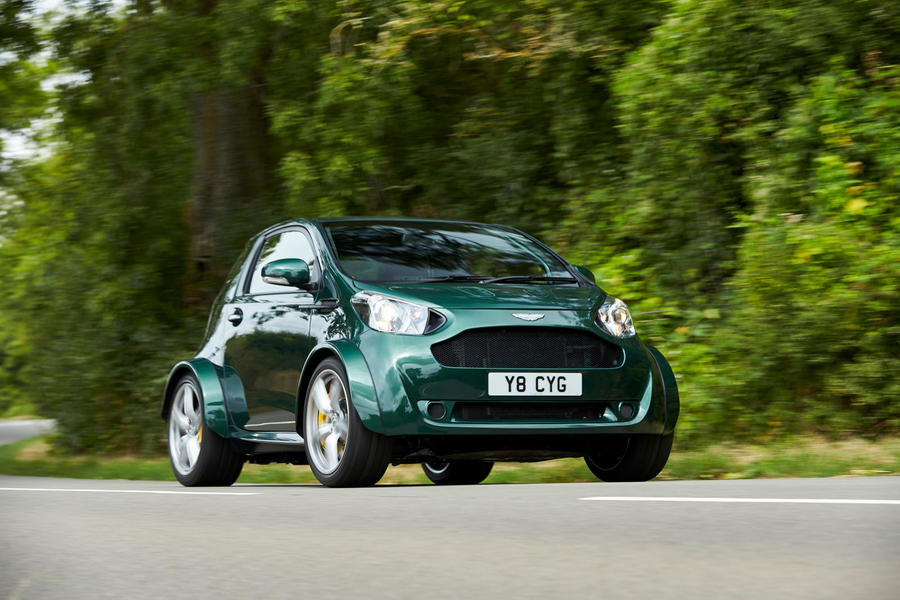 Why we won’t see another V8 Cygnet

Fancy getting your hands on a V8 Cygnet? Unless your name is already on the registration document, you're out of luck. Aston made a deal with the buyer prior to developing the car that it would never produce another one.

Nor will the company say how much the car's new keeper paid to realise such a spectacular dream, although it was undoubtedly enough to purchase several of the brand's more mainstream offerings.

But anyone with their own unlikely dream for one of Aston's other products (and sufficient depth of pocket to realise it) is invited to contact the Q division to discuss it in greater detail. 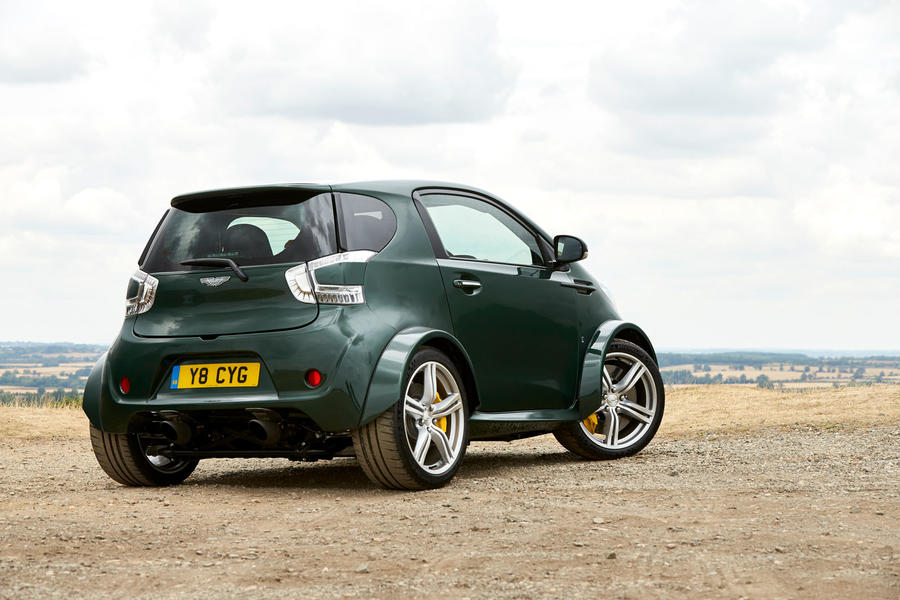 The mismatch is all too

The mismatch is all too obvious - You need comically widened wheelarches in order to make this work.

Please take it round the ring

Please take it round the ring!

Seriously would love to see how fast it could get round.