BACK TO ALL NEWS
Currently reading: First drive: 2025 Volkswagen ID Life concept review
UP NEXT
Why last-mile delivery EVs are big business for car and retail firms

We drive the ID Life concept for a first impression of the £17,000 urban EV due in four years
Open gallery
Close

Sampling a multi-million-dollar concept car is rarely anything but a fleeting experience at the best of times. So a handful of laps around Volkswagen’s Wolfsburg test track was much more than we ever expected when we were invited to drive the ID Life shortly after its world debut at the recent 2021 Munich motor show.

The new electric crossover concept points towards a future of modestly priced, zero-emission personal mobility, in much the same way that the original Beetle promised the world access to affordable combustion-engine motoring more than eight decades ago.

The new five-seater will go on sale in 2025 priced from not much more than €20,000 (£17,250). There will be Cupra, Seat and Skoda sibling models, of course. In fact, moves are already under way to produce the new Volkswagen model at Seat’s Martorell factory in Spain, which is being geared up for annual volumes of up to 500,000 electric cars on the back of a generous European Union subsidy.

It is not the only affordable mass-market electric car that Volkswagen is working on right now, though. Word is the production version of the ID Life will wear the name ID 2, positioning it below the ID 3 as an alternative to the combustion-engined Volkswagen T-Cross. An even smaller and lower-riding hatchback model with the ID 1 name is expected to follow it into showrooms as a successor to the Volkswagen e-up.

The original plan called for the introduction of the new Volkswagen crossover in 2027. But after a faster-than-expected acceptance to electric cars among private buyers, Volkswagen moved the launch forward by a full two years. It is so upbeat about the chances of success that it is happy to let us get behind the wheel of the sole existing example of the ID Life, despite the fact that it will be another four years at least before you and I can go out and buy one. 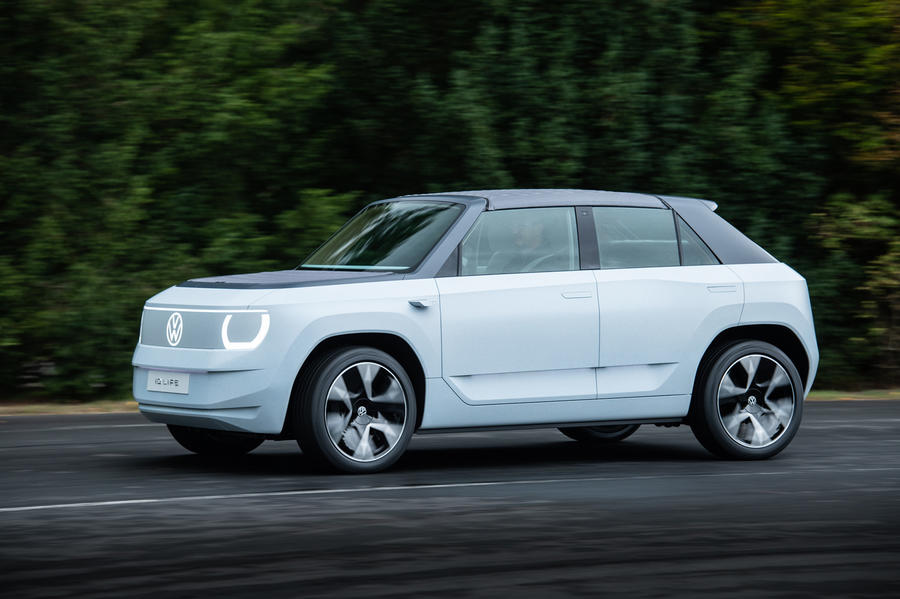 The aim with the styling was not simply to create a smaller ID 3 with some SUV-like flourishes. Rather, Volkswagen says it wanted to establish a more timeless lineage that could be progressed through to the future production version without radical changes. As such, its design shares little with its other electric-powered models, taking on a more boxy profile meant to provide it with maximum versatility within relatively compact dimensions.

As well as giving us an early look at what the production version might be like, it also provides an insight into some of the sustainable production methods Volkswagen is considering. Wood chips are used as a natural colouring agent in the clear-coat paint and the fabric for the air chamber roof is made from recycled PET bottles.

Previewing the engineering of the planned production version, the ID Life sits on an adapted version of Volkswagen’s versatile MEB platform, boasting a 100mm-shorter wheelbase than that used by the ID 3 hatchback at 2650mm.

A 57kWh battery – one of a number of different-capacity units planned for the production version and its various Volkswagen Group siblings – is mounted within the floorpan, providing the interior with a flat floor. It uses a different chemical process from that of the ID 3, with lithium ion phosphate (LFP) cells replacing the more cost-intensive lithium ion nickel manganese cobalt (NCM) cells in use at Volkswagen today.

LFP cells do without expensive cathode metals such as nickel, manganese and cobalt, making them cheaper to produce. But up until now, they have lacked the overall energy density provided by NCM cells, and they tend to be more prone to performance loss at low ambient temperatures.

In a further departure from the ID 3, the new crossover’s electric motor is mounted low within the front axle and drives the front wheels via a fixed single-speed reduction gearbox instead of being sited on rear axle and driving the rear wheels.

In the concept, the synchronous unit is claimed to develop 231bhp and 214lb ft of torque. The production version is unlikely to offer such strong reserves, although Volkswagen has already all but confirmed a hot GTX range-topper will join the line-up. 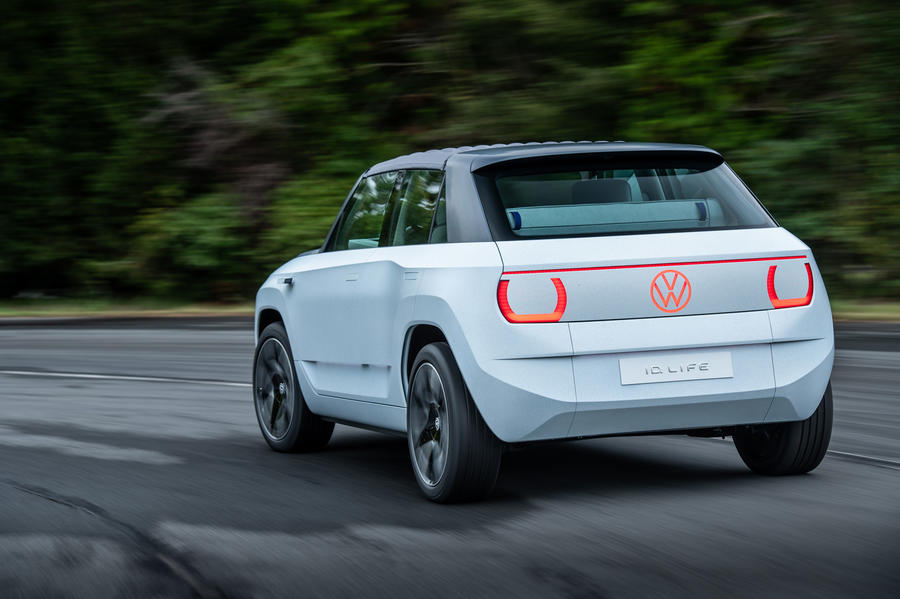 The decision to mount the motor within the front axle was primarily made on cost grounds. Additionally, there are packaging benefits, with the space at the rear set to be dedicated to storage space. As with the T-Cross, a four-wheel-drive option is not envisaged.

The design of the interior mirrors the minimal look evident in the exterior. A digital instrument display is mounted within a yoke-style steering wheel that is adjustable for both rake and reach, while the wooden dashboard is partly upholstered in a recycled polyester material and trimmed with brushed aluminium.

There is no dedicated infotainment display. Instead, Volkswagen proposes you use a smartphone in a move aimed at cutting costs and assembly time. It can be attached to the fascia via a magnet, providing navigation, radio and other functions via near-field communication.

There’s also a built-in projector with a screen that extends from the roof, allowing you to view video when the new Volkswagen is stationary, and the 'lounge' effect is further enhanced by bench-style seats front and rear. This enables a range of possibilities, from cinema seating to a bed measuring around two metres in length.

Despite relatively compact dimensions, there’s a pleasant feeling of space and accommodation throughout.

In a hat tip towards the digital generation at which the new car is aimed, the words 'GAME ON' are printed on one of the trim elements. The starter button is etched into the wood of the dashboard, while the gear selector is incorporated as a permanent readout within the steering-wheel-mounted display along with the indicators, doing away with the need for steering column indicator stalks. 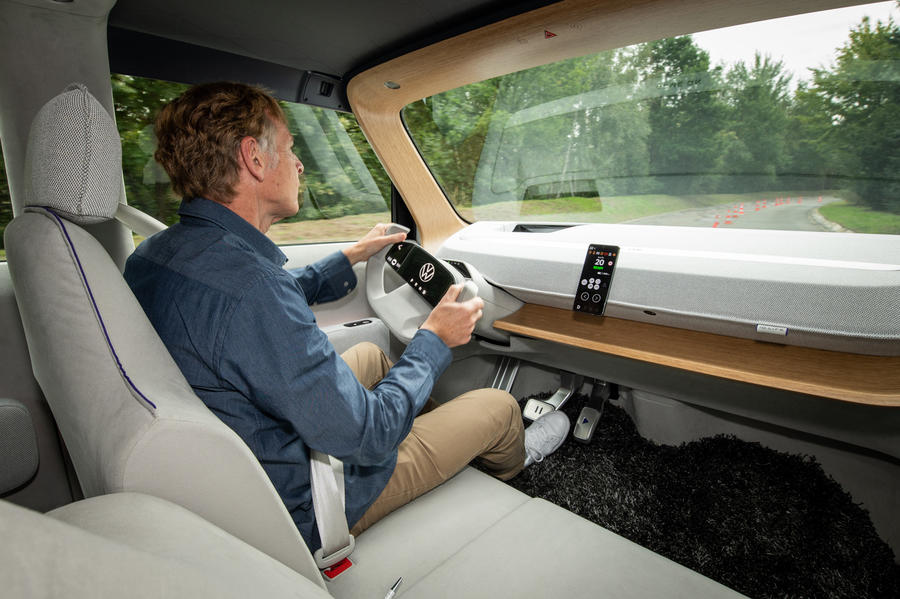 The raised seating gives you a pretty good idea of how the production version of the ID Life might feel from the driver’s seat, providing good visibility to each corner. However, there’s predictably little about the driving experience to tell you what it will be like on the road.

The new one-off crossover has been constructed as a proof of concept. It is meant to demonstrate what is feasible in terms of design and packaging rather than focusing on factors such as acceleration and dynamics. Right now, it lacks the engineering maturity to tackle the more demanding sections of Volkswagen’s test track with any great vigour.

That said, the junior ID model is much better to drive than many concept cars we’ve come across over the years. This can partly be attributed to the fact that it is already based on an early version of the production car’s platform, rather than one cobbled up from an existing  combustion-engined platform. This gives it a good degree of structural rigidity and overall stiffness.

The shortened MEB structure supports a MacPherson-strut front and torsion-beam rear suspension, an arrangement we’re told will carry over to the production model due in 2025. As with the electromechanical steering system of the concept, it is sourced from the ID 3. The wheels, meanwhile, are 20in in diameter and wear 235/45-profile Continental Eco Contact tyres all around.

The parts sharing is crucial to Volkswagen’s decision to push ahead with a new pricing-led electric model, bringing valuable economies of scale in purchasing as well as important savings in development costs.

The car is quite responsive off the line. However, the subsequent acceleration reveals little of the potential promised by the official performance claims. That is because Volkswagen has limited the top speed to just 18mph. When we reach it, there is a strong whine from the electric motor and a noticeable amount of wind buffeting where the windscreen meets the fabric roof - a reminder that the ID Life is hand-built and not reflective of the quality of the production car.

The steering is light and very direct, although the yoke-style steering wheel makes manoeuvring in tight spaces a rather unpleasant task without any meaningful weighting or self-centring. Still, when we get it tracking straight ahead, it proves more agreeable and amenable to smaller inputs.

So far, so good. But there is clearly still a lot of work to be done before Volkswagen’s electric alternative to the T-Cross can be progressed to a prototype stage of development.

After going all in with electric cars, Volkswagen is now committed to delivering an affordable model for the motoring masses that bundles together both the styling and packaging characteristics of its latest concept at a price point the German car maker promises will position it well below the ID 3.

Way more appealing than an ID3. And it's got luggage space up front, just like a Beetle! VW rushed to market but maybe this will be their first really appealing EV.

They don’t emit emissions while moving, but do everywhere else while charging and in production.

Well if it's juiced on renewable energy it's zero emission from the motor at least. That's undeniable. Production is another matter, but at least manufacturing processes are getting cleaner. It's the battery that needs most improvement as we know.

I used to read the news of new car launches with excitement.

Even if the impossible happens and they crack better batteries, reasonably long real-world ranges and get remotely near a £17,000 price (which they won't, especially in 4 years time when an entry level ICE hybrid supermini will cost close on £27k, going by recent car price inflation), I still have no interest in owning this car.

I'd buy something like this with the same passion I have for buying a new washing machine.

That's not to say I'm against EVs - I'm just against paying so much money for something that does a job but doesn't excite me (and looks like something a kids cartoon character should be driving about in).

gavsmit I agree 100% with your sentiment. ICE have undoubtedly contributed to the worlds problems but its not the Holy Grail. Check out the increase in aircraft emissions and the projections and ask yourself who's banning them in 2030! Depending on where you live in the world gavsmit I would plan on buying a 'keeper' in the next 5yrs and putting it in storage. Then when they are no longer available new, bring it out as a used new car and enjoy it?