Exuding class and substance, the new GLC looks set to improve on its predecessor over many levels
Open gallery
Close

It is now more than seven years since the first generation Mercedes GLC SUV began rolling into showrooms as a replacement for the GLK. In that time, the high riding Audi Q5 and BMW X3 rival has established itself as the single best-selling Mercedes model worldwide in the past 12 months, beating out the long time holder of the title, the C-class saloon, with over 270,000 sales in 2021 alone.

Given its popularity, it is no surprise to learn the second-generation model, driven here in prototype for the first time off the back of cold weather development testing in northern Sweden, adopts the same fundamentals as its predecessor.

As with the latest C-class, alongside which it will be produced at assembly operations in Germany, China and Finland, the new GLC continues to be based on Mercedes-Benz’s MRA platform – a predominantly steel and aluminium structure that has been further developed for improvements in overall rigidity and weight.

Given the heavy camouflage of the latest development mules, we’ll have to wait until we can make a call on the exterior styling of the new Mercedes-Benz model, which is also set to be produced in both SUV and Coupe bodystyles. However, Peter Kolb, head of overall vehicle testing for the GLC model line, tells us it is 60mm longer than its predecessor at 4718mm. The new GLC also adopts a 15mm longer wheelbase than before, giving it slightly longer overhangs front and rear.

The increased dimensions, subtle as they are, are put to good use inside. Rear seat accommodation, never one of the GLC’s strong points, has been improved with greater legroom. Boot space in conventional petrol and diesel models is also claimed to have increased by 15-litres to a class-leading 600-litres underneath the cargo blind at the rear when the adjustable rear seat is set all the way forward. 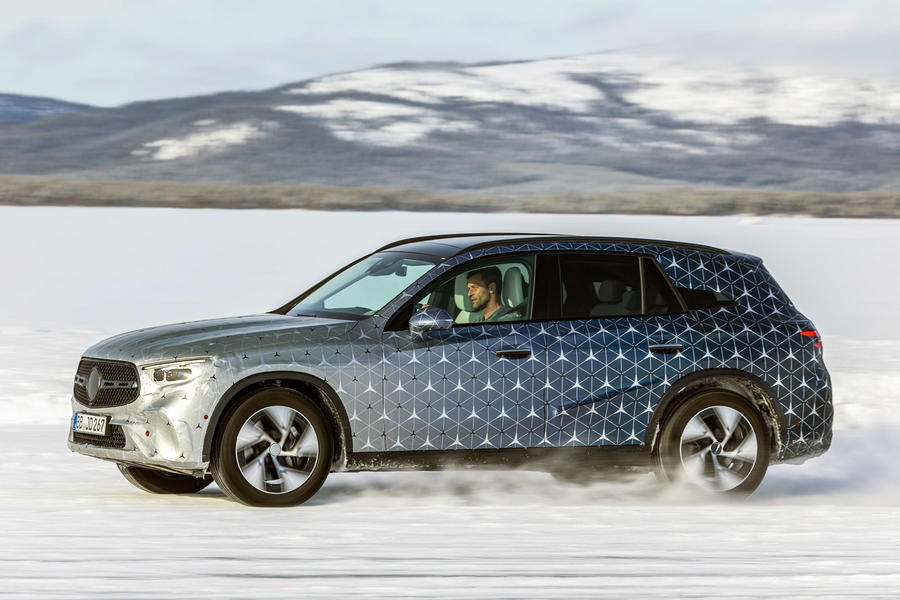 The cabin has been heavily reworked with a new higher set dashboard that aims to provide the GLC with a more SUV like feeling. It leans heavily on that of the Mercedes C-Class for overall style, albeit with its own uniquely styled ventilation units and higher qualities materials throughout.

There is also a new multi-function steering wheel with a combination of touch-sensitive pads and traditional button-based controls as well as digital instruments and portrait style information displays.

Together, they provide the GLC a significantly more contemporary look inside. There’s a distinct lack of physical controls. There’s also a superior aura of perceived quality, even on this early pre-prototype. Further changes have been made to the front seats. They feature a new construction and cushioning materials, providing for added comfort in the squab and greater support within the bolstering.

Set to see UK sale towards the end of the year, the 2022 GLC SUV will kick off sales with a range of four-cylinder engines boasting mild-hybrid properties via a new 48-volt integrated starter generator. Included is the petrol-powered GLC200 and GLC300 as well as the GLC220d and GLC 300d on the diesel side.

Also planned is the GLC400d – the sole new GLC model to feature a six-cylinder engine. As with the smaller four-cylinder engines, it benefits from the new 48-volt integrated starter generator, which provides a momentary boost of 22bhp and 147lb ft of torque for added accelerative ability and functions such as engine-off coasting for added efficiency.

Details pertaining to the engines to be made available in the UK are yet to be revealed, though Mercedes-Benz reveals there will be a combination of both rear- and four-wheel drive 4Matic GLC models.

There is also a trio of newly developed plug-in hybrid drivelines in the petrol-electric 300e and 400e as well as the 300de. Using a new liquid-cooled battery with an energy content of 25.4kWh and 108 individual cells, they are claimed to provide a significantly improved electric range of over 62 miles.

Autocar can also confirm successors to both the GLC43 and GLC63 from Mercedes-Benz’s AMG performance car division are planned for launch in 2023, both running the same four-cylinder petrol engines as those planned for the upcoming C43 and C63. 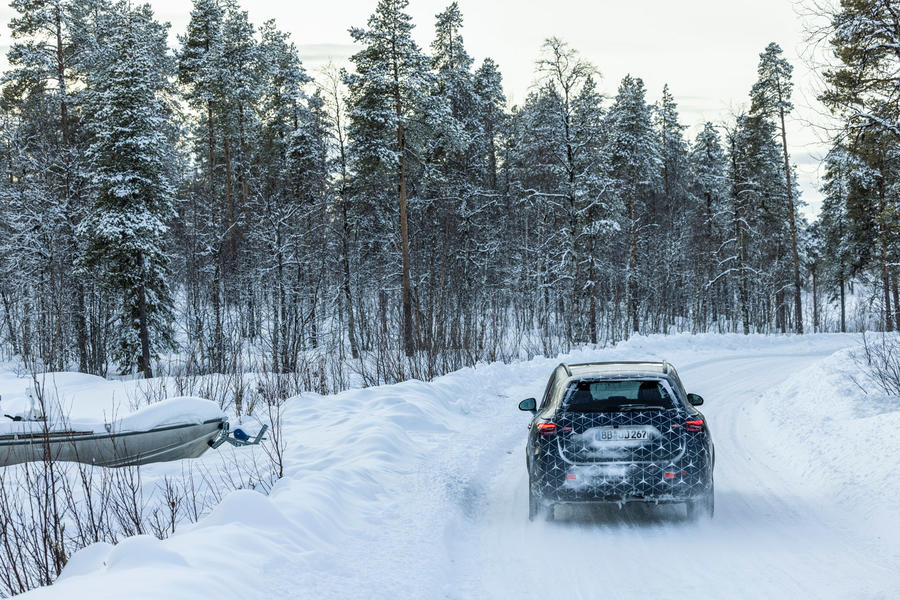 The electrification measures can be traced to the adoption of a more advanced electric architecture. It not only benefits the efficiency and refinement of the GLC SUV’s drivelines but also provides the basis for a new NTG7 operating system with a “Hey Mercedes” command prompt as well as a wider range of standard driver assistant systems, including more advanced semi-autonomous driving functionality.

As before, there’s a standard steel suspension with adaptive damping. It’s similar in set-up to that used by the C-class with a four-link double wishbone system up front and a multi-link arrangement at the rear. Buyers will also be able to specify an optional AirMatic air suspension with self-levelling and variable ride height qualities.

Additionally, the GLC becomes the first car in its class to offer rear-wheel steering functionality. It is the same system used by the C-class, but with 4.5 degrees of rear-steer instead of 2.5 degrees, providing for a turning circle of under 11 metres.

It is the less powerful of the diesels, the GLC220d 4Matic SUV, that we’re in here. The delivery and performance are quite strong.  Mercedes-Benz has also succeeded in providing the most popular of GLC models sold in the UK with added levels of refinement. We’re on a mixture of snow and ice, but it feels responsive and flexible with a keenness to rev and inherently subdued acoustic qualities with great isolation of vibration.

The result is an even more effortless and subdued driving experience at the moderate speeds we are limited to by the wintery conditions than previously. As with all engines planned for the new GLC, the turbocharged 2.0-litre four-cylinder diesel is mated to a standard nine-speed torque converter equipped automatic gearbox. The shifting of gears is exceptionally smooth.

It is the traction that stands out above all else, though. The distribution of drive remains at 45:55 front to rear. However, the new electric architecture allows a faster and more finely dosed braking effect via a newly calibrated ESP system when a spinning wheel is detected. 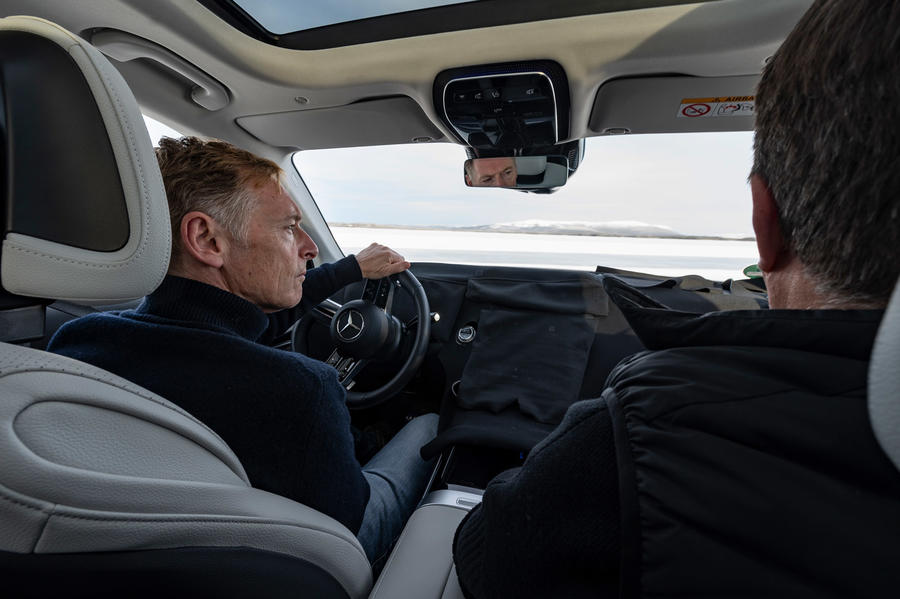 There is a very mature and measured feel to the GLC’s on-road character, at least in GLC220d guise. It is even more highly polished and distinguished than its predecessor in this regard. The handling, aided by direct and communicative electro-mechanical steering, is gratifyingly fluid, boasting newfound levels of agility.

The new model is eager and wieldy at lower speeds where the new four-wheel steer system works to enhance manoeuvrability, but also an abiding sense of stability and security when speed increases. There is a greater spread to the overall dynamic ability of the mid-range Mercedes-Benz SUV ever before. Above all, it is intuitive and easy to drive. This should see it continue to appeal to a wide range of customers

The ride, on the standard steel suspension in comfort mode, is absorbent and exceptionally compliant. We’ll need to drive it in more representative conditions than those found in northern Sweden at this time of year to be absolutely sure, but the overall comfort and isolation of road noise are improved, aided again by the more rigid platform as well as faster-acting properties to the adaptive damping control.

A competitive showing, then. We’ll wait to confirm the new second-generation GLC’s status in what is a toughly fought market segment for premium-brand SUVs until we’ve driven a proper production version on more familiar roads. Still, we get the feeling you might be looking at the new class leader. There is substance here, and it makes for a very agreeable car on many levels.