BACK TO ALL NEWS
Currently reading: First drive: 2021 Hyundai i20 N prototype
UP NEXT
2024 BMW X3 primed to take on Mercedes-Benz GLC

If you want to know how serious Hyundai is about making driver’s cars, there are 12 places on the new Hyundai i20 chassis that will be reinforced – with additional welding and bracketing – over and above the regular supermini to create the i20 N, the hot hatchback variant.

Hyundai’s N division engineers wanted a more rigid car, so they asked the question of their bosses. And management signed-off the considerable nuisance and expense of adding additional components and procedures onto the production line, as the new hot supermini rolls down the same line as what will otherwise be a regular small hatchback. I admire the commitment.

And I like what Hyundai is doing with its N division, named equally after its Namyang, Korea, test facility, and the Nürburgring, where it has a development hub – but where, you should note, it doesn’t just develop cars for the track. The i30 N is a giggle on the road, too, and as Hyundai’s director of high performance vehicle development Klaus Köster says, “drivers need to get out of the car with a grin. It’s not about being the fastest”. I’ve got a lot of time for the i30 N as a result.

The i20 N, though, driven here on the roads and on the Nürburgring’s 2.25-mile ‘sprint’ circuit (not quite the full GP loop and not the Nordschleife) in early prototype form, could be even more up my street. The Ford Fiesta ST is one of the greatest driver’s cars, little or big, on sale today, and the i20 N takes a similar formula.

It’s a front-wheel-drive supermini, five-door only, with a 201bhp, 203lb ft 1.6-litre turbo petrol engine under the bonnet. The gearbox is a six-speed manual only, and it drives the wheels through a mechanical limited-slip differential, which will be optional depending on market demands – which I imagine means it’ll be standard in the UK, because we like that kind of thing.

The car will weigh a touch under 1200kg, have a 0-62mph time of 6.7sec and go on to 143mph. If you were creating the blueprint for a small hot hatchback, I don’t think you’d end up far from here. 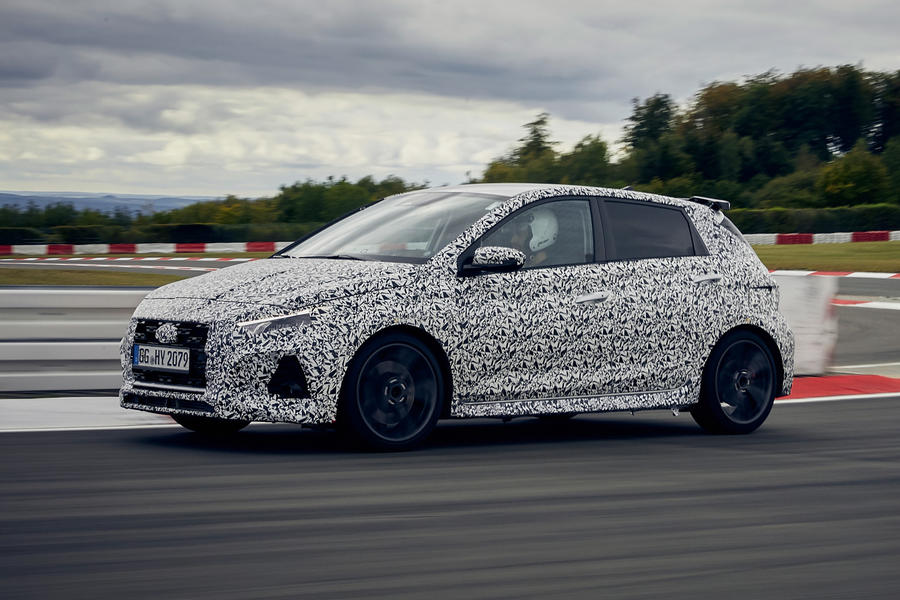 That’s not to say a manufacturer couldn’t balls it up from this point on, though. Even really good car makers could miss the mark, but Hyundai has not, because this “95% finished” i20 N is terrific.

There’s no star rating on this drive because the car’s still a prototype, wearing an unfinished interior and exterior – less finished than cars we’ve seen months ago, oddly – but mechanically it’s representative of where development has reached.

You sit a little high for a sporting car (like a Fiesta ST), but the seats are supportive and it’s easy to find a good driving position. There are – as with the i30 N – quite a lot of drive modes and maybe too many options, which can adjust engine response, rev-matching quickness, stability control or steering weight. But the dampers are passive so the suspension, at least, always remains the same.

There are MacPherson struts at the front, with reinforced domes and different knuckles to normal i20s, while at the rear there’s an uprated torsion beam with increased torsional stiffness. Behind the rear seats is a low brace that runs across the car between the rear wheel arches. An i30 N gets one of those too, and it can be removed if you really need the floor room.

The 1.6-litre engine from Hyundai’s ‘gamma 2’ engine family will be new to Europe when it arrives in this car. There’s only a little turbo lag at low revs and a soft limiter at 6500rpm. That peak torque and power are more or less the same (imperial power and torque figures are always equal at 5252rpm) gives you an idea of how broadly powerful and linear it is. They call it a ‘flat power’ engine, and it has a very steady torque plateau that isn’t peaky at all. The six-speed gearbox is crisp, too.

It’s as if they’ve looked around, seen how you could create something wacky or wild, and decided dead against it. Other basics are sound too. The ride is, I’d say, a little more supple than a Ford Fiesta ST’s, so there’s more body lean but control is still good. There’s a ‘tiptoe’ feel to it, as if it’s alert, so agility is great and, out on some hillside roads near Nürburg, it feels like it’ll lift a rear wheel as you corner hard and lean on the front. 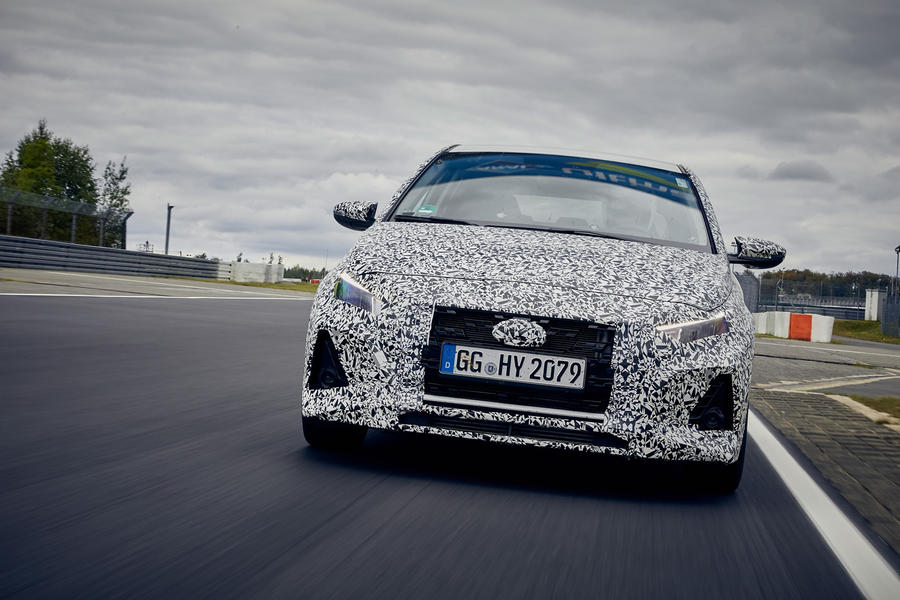 The steering is good, with a smooth take-up from straight ahead. It’s a bit less frenetic than the Fiesta, but with a medium weight that builds confidently and, as cornering forces increase, gives you something to lean onto. What’s particularly rewarding is that, if you do lean on it, the i20 resists understeer well and, as the i30 does – and as the best Renault Sport models and hot Fords do – the rear gets involved, too. It’s at its most notable on a circuit, although that’s hardly surprising.

Cornering isn’t just a case of managing the front end. Braking response is good and it’s easy to trail those towards an apex, which helps to rotate the car. The front discs are 320mm diameter and you can feel the i20’s steering wanting to edge back to straight ahead. I have no idea if overall grip, on 215/40 R18 Pirelli P Zeros, is better or worse than a Renault Sport Clio or a Fiesta ST, and I’m not particularly interested, either. I just like the cornering balance.

Back onto the power and the i20 generates strong levels of traction. You can feel the LSD at work, just keeping the front end stable, preventing the inside wheel from spinning but nibbling ever so lightly at the steering while it does it – just enough to remind you it’s there.

There might be 5% still to do but I wouldn’t be unhappy if I unboxed an i20 N like this ready to go. I think, though, that the passive bits of the experience are more engaging than the changeable ones. But in having a set N mode, as well as Comfort and an individually tunable mode, in the i30 N, and now this, Hyundai clearly wants to give drivers a lot of choice.

There are three different stability control states, including all-off, three rev-match modes for downshifts – off, on, or really vibrantly on – and different steering weights. There aren’t as many options as an i30 N – which my fag packet calculations I think gives 1458 different ways to set it up – but still, there are quite a lot.

The nice thing about Fords is that they tend to present just a couple of preferences and then let you get on with driving it. Hyundai’s engineers are sufficiently talented that, if they told me what was best, I wouldn’t be inclined to argue. This has the makings of a cracking hot hatchback.

As ever these days, shame

As ever these days, shame about the lack of choice of bodystyle ...

They've produced a corker by

They've produced a corker by the looks of it. I hope the addition of the i20n helps keep the small hot hatch segment alive for that much longer
gavsmit 7 October 2020

...hmmm I don't think that's going to happen looking at the high price of more mundane trim levels for the new i20.