What, exactly, is the Toyota GR Yaris? That’s hard to explain, because it’s rarely what you expect it to be.

Let's start with the obvious: it looks a bit like a Yaris, but it’s not really a Yaris.

It’s a preview of Toyota’s next World Rally Car, except that it’s not a homologation special in the traditional sense. It’s a Ford Fiesta-sized pocket rocket, but with underpinnings more in common with larger hot hatches such as the Honda Civic Type R. It feels a sort of successor to the Yaris GRMN, but its production run will be a lot bigger, moving into five figures. Its exaggerated bodywork styling suggests flamboyant excess, but the underlying philosophy is ‘less is more’, with a clear focus on weight saving and efficiency.

UPDATE: The 257bhp Toyota GR Yaris has been officially revealed - get all the technical information here

Essentially, it’s a lightweight, four-wheel-drive hot hatch designed to perform on road, track and rally stage. Given the development code GR-4, the GR Yaris was due to be shown at the final round of this year's World Rally Championship in Australia, but the event was postponed when the rally was cancelled due to the serious fires in the region.

But it has a greater significance: it’s the first true performance car developed entirely in-house by Toyota for around 20 years. There’s no co-development with Subaru (GT86) or BMW (GR Toyota Supra) here: this is all the work of Toyota’s nascent Gazoo Racing performance division, with input from both Toyota’s motorsport arm and Tommi Mäkinen Racing, which runs the firm’s World Rally Championship programme.

In a time of focusing on efficiency, the significance of Toyota returning to performance cars shouldn’t be lost. And it definitely isn’t on Naohiko Saito, the self-confessed “crazy engineer” who led development of the GR Yaris. You sense Saito can scarcely believe Toyota allowed him to make it. “Dreams do come true,” he says, with infectiously enthusiastic, wide-eyed glee.

The brief Saito and his team were given when the project began around three years ago was to produce a performance car that would boost the image of the new Yaris, could compete in national rallies and would help with the homologation of the 2021 Yaris WRC.

Those three demands can be seen in the design of the GR Yaris. It looks like a regular Yaris that has spent several months gulping down protein shakes. It shares a few things in common with the forthcoming new Yaris: it’s built on the same basic platform and has the same wheelbase. But the upper body is all new and the differences are easy to spot: it has three doors whereas the standard Yaris is five-door only, the roof is substantially lower at the rear louvre and the rear features a notably wider track, with big, beefy wheel arches.

Those changes are to aid the design of the next Yaris WRC, due to rules that bodywork must closely follow that of a production car. The rally team gave Saito “many difficult requests”, principally regarding the car’s aerodynamics, weight and strength. Saito then had to battle to gain approval for those changes – and it wasn’t easy, given that Toyota is still essentially a high-volume producer of mass-market cars. “When we asked for three doors, everyone disagreed, because it meant a new body,” he says. “We had to fight for it, but we finally got it.”

Saving weight was a key consideration, Sato channelling his inner Colin Chapman during the development process. He proudly notes that you can flex the bumper by pushing it with one finger. (I tried. You can.) “That caused much discussion,” he says, “because if you can flex it, customers might think it’s cheap – but to have a lighter body, customers will accept it.”

Given the number of arguments Saito won and the divergence from a standard Yaris, you sense this wasn’t a cheap car to develop. “I would say it’s not a bean-counter car,” he says, laughing. 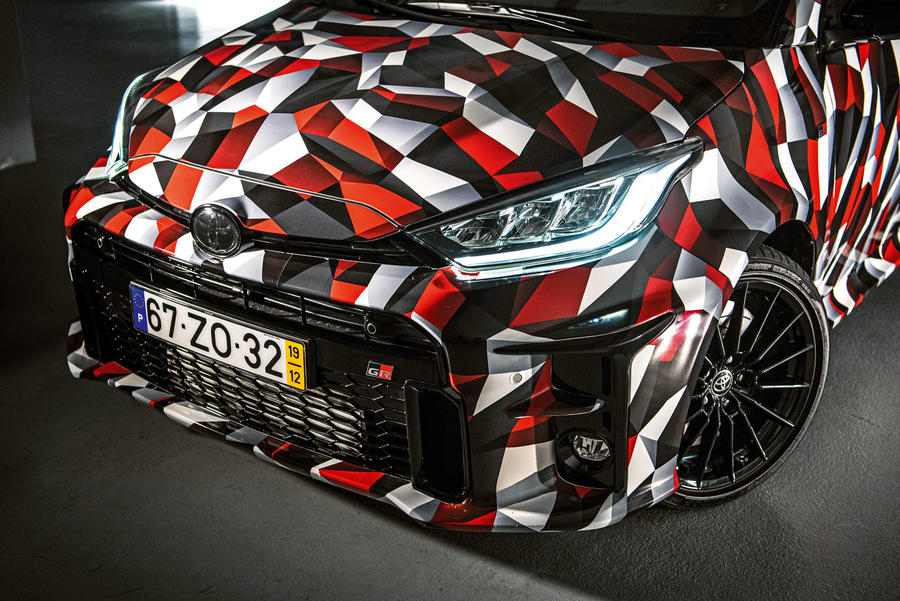 Under the bonnet of the GR Yaris

There are more changes under that lightweight bodywork, most notably the three-cylinder 1.6-litre turbocharged engine under the bonnet. It’s used both because it’s the biggest that will fit the car and because Saito felt that the 2.0-litre turbos he tried in various benchmark rivals (particularly a Subaru WRX STI) were all too heavy.

It’s a brand-new engine and, in a somewhat off-brand move for Toyota, has absolutely no hybrid elements. But it was designed with a focus on saving weight and efficiency. Sato claims it is the lightest and most powerful 1.6-litre production engine in the world. Toyota says it will offer more than 247bhp and 258lb ft, although those are the only technical figures forthcoming.

The engine is coupled to a six-speed manual gearbox – there’s no automatic, both to save weight and because a manual makes it more fun to drive – with power sent to all four wheels. Unusually, the car’s GR-4 AWD system doesn’t feature a centre differential (too heavy), instead using a high-performance coupling in front of the rear axle to control power to the rear wheels. Drivers can choose from three settings: Normal (60:40 front to rear), Sport (30:70) and Track (50:50).

The front suspension has MacPherson struts and the rear replaces the regular Yaris’s torsion beam for a double-wishbone set-up. Unlike with many hot hatches, the ride height is fixed because fitting a system that adjusts it would, predictably, add too much weight. The GR Yaris also gets new 18in four-pot brake calipers at the front, with 16in two-pots at the rear. 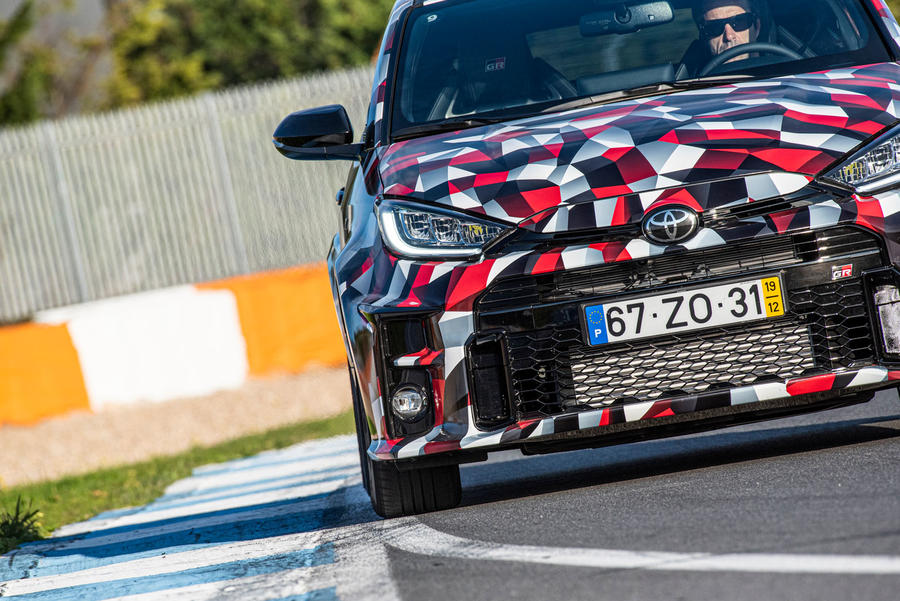 What the GR Yaris is like to drive on road, track and stage

With Toyota still relearning how to make performance road cars, Saito admits it has taken some time for the car’s development drivers – including its three 2018 WRC drivers – to hone it. “The first car was a prototype and even the rally drivers couldn’t control it,” he recounts, gleefully. “The boss requested that we need to learn the technology properly.”

Thankfully, Akio Toyoda’s requests were heeded long before Autocar was invited to step into a late-development prototype on the Estoril circuit and surrounding roads. Once again, the GR Yaris isn’t what you’d expect for an aggressively styled four-wheel-drive hot hatch. It’s actually rather civilised. The small turbo engine is quiet and calm in general usage and the suspension, while stiffened, is far more pliant on bumpy roads than, say, a Hyundai i30 N.

But the GR Yaris can do performance. On track, with the freedom to explore its potential, the 1.6-litre engine is responsive, torquey and potent, with a pleasant – if not overwhelming – aural note. Beyond its exaggerated bodywork, the GR Yaris’s performance comes not from excess but reduction. The plentiful traction and lightweight design – Toyota hasn’t given a weight figure yet – results in handling that is nimble and intuitively direct. It’s neutral and confidence-inspiring, in the way that rally drivers want their machines to be. It’s capable, too: a brief run in a test hack on a rutted, bumpy gravel loop showed that it doesn’t just have rally-based styling. 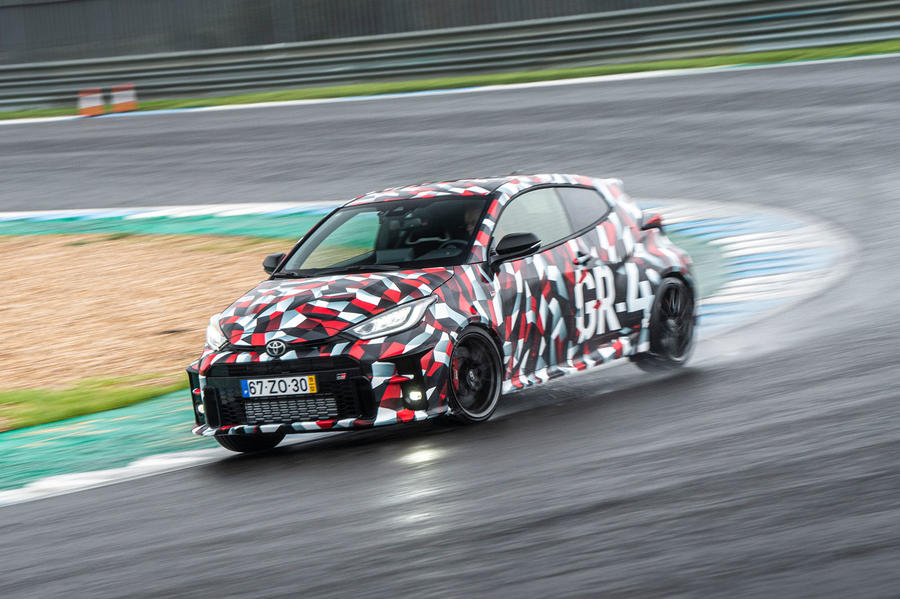 Our prototype car featured a largely concealed interior, but what could be seen was clearly closely related to the new Yaris, with the addition of GR branding, sports displays and the torque control dial located on the centre console.

Toyota believes the GR Yaris sits in a space of its own between similar-sized rivals such as the Ford Fiesta ST and larger hot hatches such as the Civic Type R. It’s probably closer to the latter in performance and character – and if the GR Yaris can develop as much of a cult following as the Type R, it will definitely fulfil one of Toyota’s key goals for it.

A final judgement will have to wait until we know the full specifications and drive the finished car near the end of 2020. Price could be a key consideration, too: given how bespoke this machine is, the cost is likely to be somewhere close to a Civic Type R. Quite a bit for a Yaris, that.

But for what amounts to a premium price, buyers will be getting a fun, formidable machine developed with passion and commitment – but one that probably won’t quite be what you expect it to be.

How much rally car is in there?

The age of limited-run, barely road-legal homologation rally specials is over: current World Rally Car rules allow for cars to be fitted with 1.6-litre turbo engines and drive layouts not featured on the road-going models they’re based on.

But the rules do require the bodyshell to closely follow the road car’s – and the 2021 Yaris WRC will be based on the GR Yaris, rather than the standard model. The three-door design was a key request of the rally team, as three-door models can carry more aerodynamic elements. The lower roof louvre was another request, to increase the gap to the (fixed-height) rear spoiler: the roof has been lowered to the maximum allowed by road regulations for rear visibility.

Although the three-cylinder 1.6-litre engine won’t be used in the Yaris WRC, it is still set to feature on the stages. It has been designed so it could be homologated for use in an as yet unconfirmed second-tier Yaris R5 rally car.

quite an impressive little

quite an impressive little machine, awesome that it is AWD should feel like a proper little WRC car.

Interesting, but it falls between two stools.

Size of a Fiesta ST but priced like a Civic Type R. Both of which feature more practical five door versions.

Apart from being special for a few diehard Japanese performance car fans, I can't see the attraction over these examples of current 'best in class' options.

I wonder if this engine could be in a Lotus Elise too :-)