Harder version of 488 GTB surfaces on social media; the track-focused variant is a natural rival to the Porsche 911 GT2 RS
Open gallery
Close

Leaked images of Ferrari's soon-to-land track-focused 488 variant appear to show that it will be named the Pista - which is Italian for track.

Ferrari has refrained from commenting on the images or the Pista name. The brand's only official nod to the upcoming car has come in video form. Footage released last week (scrolls down) showed the 458 Speciale successor in action on track at the company's Maranello base. 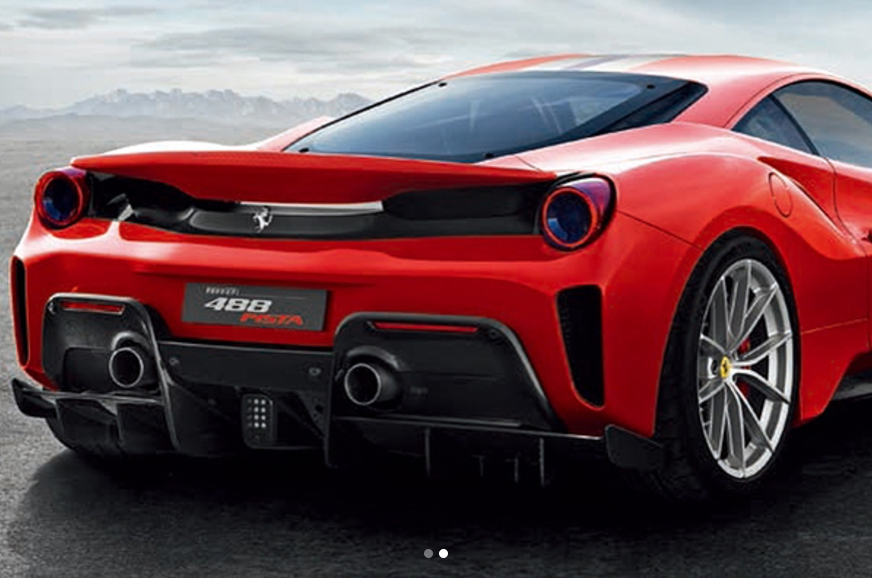 Set to become the most hardcore, track-focused Ferrari road car yet produced, the top 488 model will use a 700bhp-plus engine derived from the 488 Challenge race car – two of which are also featured in the video – and feature new bodywork focused on maximising downforce.

An earlier leak of technical slides onto Ferrari Photo Page have also suggested the car's engine, which is expected to be 10% lighter in the Pista, will be the marque's most powerful production V8 yet produced.

Most likely, the 488's mid-mounted twin-turbocharged 3.9-litre V8 engine will be boosted with increased turbo pressure and internal modifications to produce its anticipated 700bhp, with torque also increasing substantially on the standard car’s 561lb ft.

The car, a hotter version of the 488 that will go toe to toe with the Porsche 911 GT2 RS, will essentially be a replacement to the discontinued 458 Speciale, which is widely regarded as the best driver-focused Ferrari to date. It has been spotted testing outside Ferrari's Maranello base on numerous occasions and is tentatively tipped for arrival at this year's Geneva motor show. 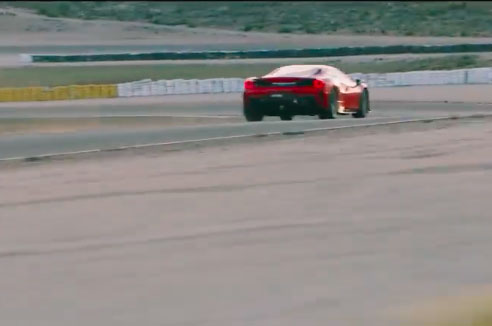 Expect the 488 Pista to feature an extensive list of carbonfibre parts for the body and interior. The bonnet, bumpers and rear spoiler will be made from the material, as will large sections of the interior, including the dashboard.

The standard 488 produces 325kg of downforce at 155mph, but the 911 GT2 RS produces up to 340kg. Ferrari's aerodynamicists, who have access to the brand's Formula 1 wind tunnel, will be keen to rival that figure. Expect large intakes for the more potent powertrain, a bigger front lip and more prominent rear diffuser. Leaked slides suggest a 20% improvement in overall aerodynamic efficiency for the 488 Pista. 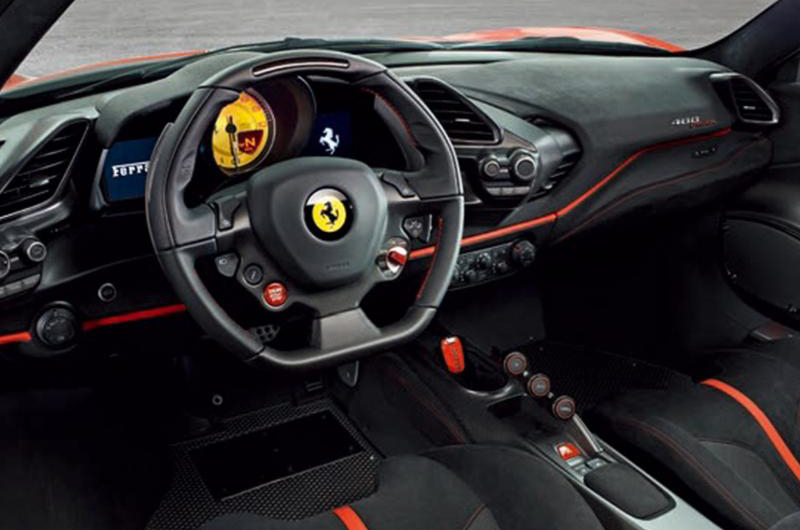 There's also mention of 20in wheels made from carbonfibre, saving 40% in weight compared with the standard 488 rims. They'll come wrapped in Michelin Pilot Sport Cup 2 rubber.

Ferrari tradition suggests engineers will also remove non-essential parts from the interior and sound deadening from the car's engine bay, as well as fitting other lightweight parts such as thinner glass for the windscreen and side windows, and lighter ceramic brakes - like with the 458 Speciale. 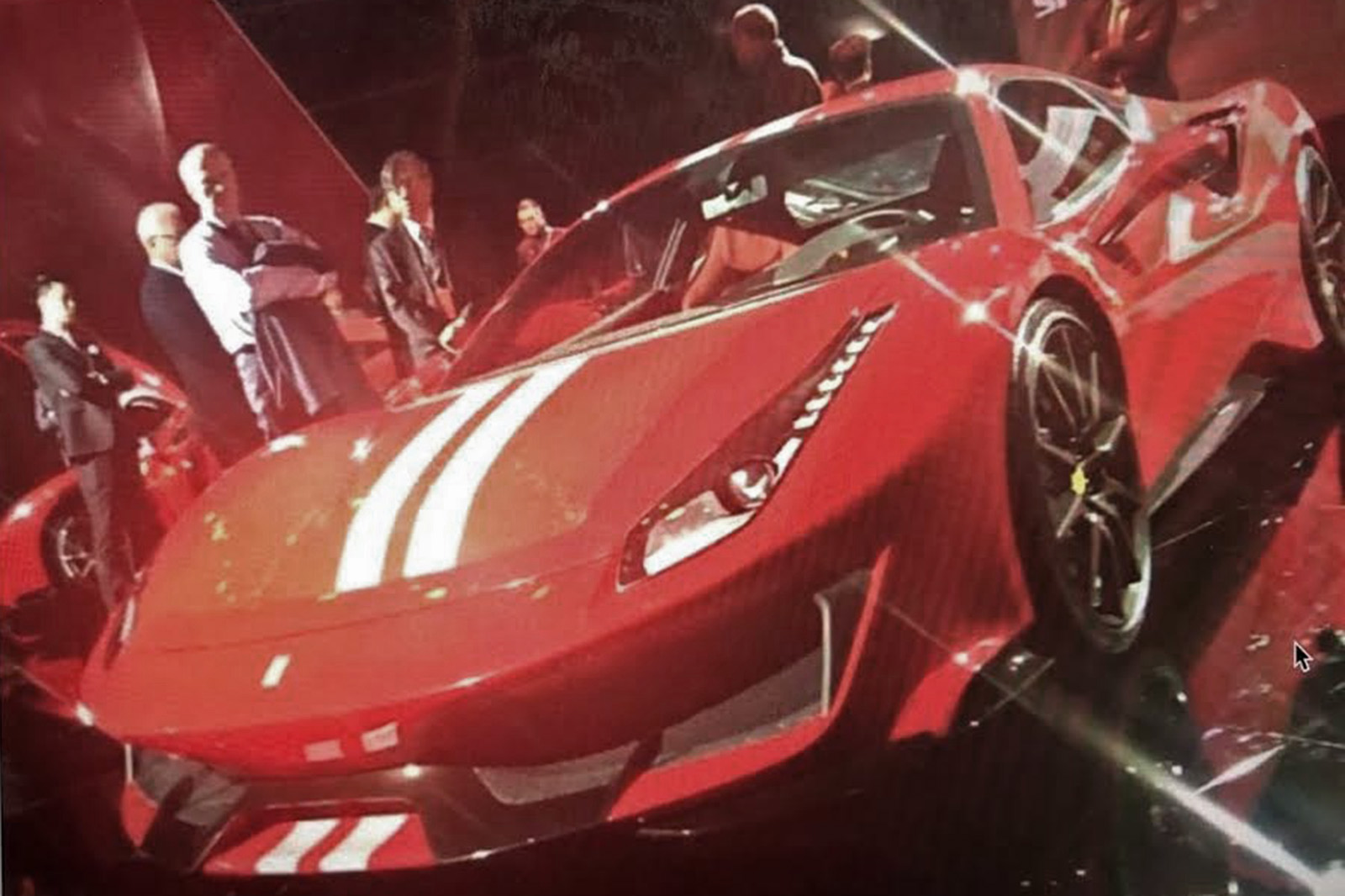 Additionally, the brand's technical boffins will give the car its own unique settings for the seven-speed dual-clutch gearbox and Slide Slip Control management, with the latter likely to enable even greater angles of yaw before fully intervening.

Ferrari is yet to verify if the name Pista will be applied to its new model. It was previously rumoured to be called GTO. In the leaked slides, it has been referred to as a 'New V8 Sport Special Series'. GTO has only been applied to three Ferraris before – the first two of which, the 250 GTO and 288 GTO, were racing machines. The latest, the 599 GTO, was a road-legal version of the track-only 599XX, leading many to claim it wasn't worthy of its racing title.

For this reason, the harder but still road-legal 488 is expected to adopt a new tag that continues the trend set by its spiritual forebears, the 360 Challenge Stradale, 430 Scuderia and 458 Speciale. Although unconfirmed, it means the name Pista seems likely.

Prices will increase significantly over the 488 GTB. An entry-level figure of more than £215,000 is possible.

After a drive you say it like the godfather:

"I just Pista my pants"

Whether this would make me do that more than an F40 is something I am longing to find out! Oh how I wish I would get the chance....

Great looking Ferrari, don’t often say that, but this one along with the F12 and the 812tdf are in my opinion the best looking for a decade,  recently saw a 458 in the metal for the first time and I wa# underwhelmed!, this 488 Pista (one letter away from an Italian staple) is great, the one thing I’d remove though is the stripe down the middle, makes the overall shape messy.

And this one looks very tasty.