BACK TO ALL NEWS
Currently reading: Electric Mini Moke rolls off production line before summer deliveries
UP NEXT
Analysis: Why the decline in diesel sales has slowed in 2022

The first examples of the revived Mini Moke have rolled off the production line ahead of being delivered to customers in the summer.

The new Moke is priced from £29,150 before taxes and incentives are applied. Moke International, the company behind the car, is claiming it’s the first heritage brand to go fully electric.

“Moke is all about country roads, beach excursions, the summer breeze in your hair and enjoying the journey, rather than hurrying from A to B," said commercial director Robin Kennedy.

"We’ve taken the original Mini Moke, created by Sir Alec Issigonis, and reimagined it for today’s world - and tomorrow’s - as a fully electric vehicle.

“In recent times, petrol-powered Mokes have been championed by everyone from Kate Moss to George Russell. Our team has been working relentlessly for three years to engineer and manufacture a worthy, sustainable successor with the latest technologies.

"Made in Britain, the electric Moke is now ready to inspire and delight a new generation.” 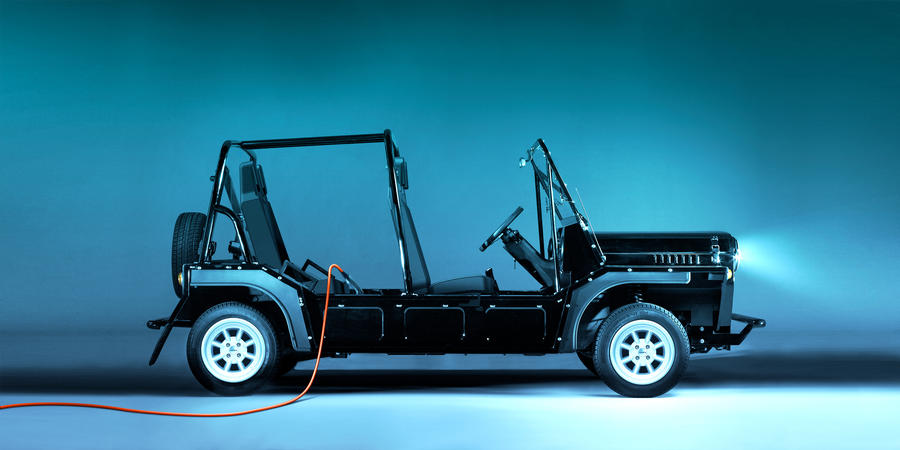 The size of the battery hasn't been disclosed, but the Moke delivers 89 miles of range – enough, its maker said, for five trips between Cap-Ferrat and Monaco.

Customers are able to personalise their cars "to their exact tastes and sensibilities", with power steering, regenerative braking and heated windscreens all included as standard. It's available in both right-hand and left-hand drive.

“Moke going electric secures the appeal of one of Britain's best-loved marques for many generations to come,” said Moke International CEO Isobel Dando, a former product lead at Rolls-Royce.

“Moke’s marriage of fun, personality and open-air thrills will only be enhanced through the performance and silent running of an electric powertrain.

"We're proud to write a new chapter in one of British automotive folklore’s best love stories.”

The Moke is built "at a state-of-the-art facility" in the UK operated by the Northamptonshire-based Fablink Group.

Moke International says it has 500,000sq ft of production space at its disposal, employing around 700 people across six UK sites.

The brand was revived in 2017, with the success of various special editions leading to investment that, the firm says, has secured its long-term future.

It also says it was able to commit to the UK as its manufacturing base thanks to a government grant from the Niche Vehicle Network, as well as the post-Brexit trade deal that "allows UK automotive businesses tariff-free access to EU markets, based on defined rules of origin".

As such, all of the car’s battery cells, motors and inverters will be sourced from "tier-one European suppliers".

Nickktod 26 May 2022
Just the ticket for keeping in the garage at your very expensive holiday home in the sun. Not sure there will be much call for the RHD versions though!
View all comments (6)