BACK TO ALL NEWS
Currently reading: Chevy's baby SUV - first pics
UP NEXT
Shame to Lusso you: A eulogy to the last four-seat Ferrari GT

Chevrolet will enter the baby SUV market with an Aveo-based five seater, spied in testing here for the first time.

Although designs have yet to be finalised, the new car is being designed and engineered by GM Dat in Korea and could launch as early as 2012.

See the spy pics of the new Chevrolet baby SUV

At a sneak preview of the clay model of the car last year at the Korean R&D centre, GM execs confirmed to Autocar that it will be built on a slightly stretched Aveo platform and could be offered in both four-wheel drive and front-drive guises.

GM Dat design director Taewon Kim confirmed that it will have the same family look as the new generation Chevy models, but that pains were being taken to vastly increase interior quality over the Aveo.

There will also be more attention paid to colour and trim than current Chevy models, but the new SUV will also carry over the company’s trademark ‘dual cockpit’ design, seen on the Cruze small saloon.

A sneak peak at an interior styling buck also showed that the company is planning to use some switchgear sourced from the Vauxhall Astra and Insignia. It will also use a new generation digital display that will also appear in other future Chevy models. However, Taewon Kim was quick to point out that this didn’t mean that future Chevys will go head-to-head with Opel models. "There have to be differences between Chevy and Opel," he told Autocar "but because of Opel we don’t want to push Chevrolet down."

Autocar can reveal that there will be a Vauxhall/Opel-badged version of the baby SUV and can confirm that there will be more differences than with the Vauxhall Captiva and Chevrolet Antara: cloned models that shared the same body and components as each other.

See all the latest Chevrolet Aveo reviews, news and video 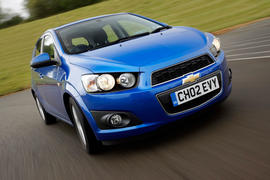