BACK TO ALL NEWS
Currently reading: Cayman R 'most extreme yet'
UP NEXT
Britain's Best Driver's Car 2020: The main event

Cayman R 'most extreme yet'

The extreme Porsche Cayman R will deliver a bigger dynamic advantage over the Cayman S than the Boxster Spyder does over the Boxster S, according to Porsche’s chief of mid-engined cars, Hans-Jürgen Wöhler.

He told Autocar that the hard-top body’s rigidity allowed his engineers to push the Cayman’s chassis even further than the Boxster’s in this lighter variant.

See the official pics of the Porsche Cayman R

“The difference between the two Caymans is coming out of the stiffer bodyshell of the fixed roof; it means the chassis can fulfil 100 per cent of its potential, whereas in the Boxster Spyder it’s about 90 per cent,” said Wöhler.

“We have a special set-up of spring rates [five to 10 per cent stiffer], shock absorbers and torsion bar that is unique to this car. Plus, it’s 20mm lower.”

Read the full story on the Porsche Cayman R

The car goes on sale in February, with a price premium of around £5000 over the Cayman S. Porsche expects to sell one R for every five S variants, but take-up could be higher in the UK.

See all the latest Porsche Cayman reviews, news and video 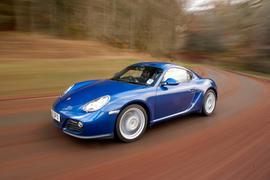 Is the Porsche Cayman a Boxster with a fixed roof, or a mini 911 with the performance and handling to rival much more expensive rivals?

If you've driven the Porsche range, you'll know the Caymen is probably the best handing of the lot.

It makes sense to have a stripped out version, Porsche customers have been asking for one for 5 years.

My problem is the amount they charge extra for the amount of additional work. Porsche are becoming mor cynical when it comes down to the RS, clubsport variants...

But at the end of the day, there is a market for them.

Making these types of cars is much more what the Porsche brand should do that mini-suv and ugly 4 door saloons..

I think if I could have anything in the current Porsche lineup, regardless of price, I'd probably have this. I imagine it will be a brilliant drive, and it doesn't come with the baggage of the 911.

Steep or not isn't the issue here, it's Porsche painting themselves into a corner, they seem hell bent on haveing a model for every need, they are almost becoming mainstream like a Ford or a Vauxhall, i realise they've got to diversify and have always the "ultimate" hardcore car in each sector, think they just try too hard in too many areas, keep hardcore for the 911, make more of the Panamera, needs input?.