BACK TO ALL NEWS
Currently reading: Caparo developing new T1 track car with more than 700bhp
UP NEXT
Audi A9 E-tron: electric luxury saloon due in 2024

UK engineering firm Caparo is working on an uprated version of its T1 supercar, dubbed the T1 Evolution, that the company claims will produce more than 700bhp.

According to the company's website, the revised version of the car will retain the "race DNA of its predecessor" but will get new exterior looks, an updated chassis, stiffer suspension, a redesigned cockpit with an infotainment system and ABS, traction and stability control.

The company wouldn't be drawn on further details when contacted by Autocar, but a power output of more than 700bhp from the T1 Evolution would eclipse the original car's 575bhp, which came from a motor sport-derived 3.5-litre V8 engine. The T1 could reach 60mph from a standing start in 2.5 seconds, with 100mph surpassed in less than 5.0 seconds.

The V8 engine in the original Caparo T1 was bench-tested to around 700bhp, so it's possible that the original car's powertrain will be retained for this new iteration.

Caparo's website states the company is now taking orders for the T1 Evolution. A company spokesman declined to reveal pricing, but it's likely the T1 Evolution will be pitched above the £211,000 demanded for original T1.

News of the T1 Evolution is the first activity from Caparo for some time. Not long after the original car was launched in 2006, it hit the headlines for the wrong reasons when touring car racer Jason Plato was injured when the T1 he was testing for Fifth Gear television show caught fire.

In 2009, Caparo offered the hitherto open-topped T1 with a canopy and optional air conditioning.

The firm has previously stated plans to develop its own road cars to sit alongside the T1, including a small, ultra-light town car. The Caparo group is also a parts supplier for the Tata Nano.

Watch Steve Sutcliffe drive the Caparo T1 in the video below. 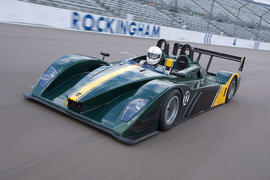 This is the car that VW should be making.

6 August 2014
The style and lightweight of the Caparo is what Bugatti should be striving for to reach its goal of 460 KMH top speed. It would be easier to achieve and less stressful on the environment.

I don't think lack of power

6 August 2014
I don't think lack of power was the reason the original didn't sell well!