BACK TO ALL NEWS
Currently reading: Bentley Bentayga Hybrid: luxury PHEV SUV updated for 2021
UP NEXT
UK EV charging network to improve after "horrible" summer

The updated Bentayga Hybrid is predicted to be the strongest-selling variant of Bentley's luxury SUV, arriving as the first of two plug-in models from Crewe in 2021.

The facelifted Hybrid arrives just a year after the original version was launched, following a raft of styling, interior and technology updates for the wider Bentayga range in summer 2020.

It will help pave the way for Bentley to achieve its goal of offering exclusively plug-in hybrid and battery-electric cars by 2026, and it will be joined later this year by a PHEV version of the Flying Spur saloon.

Like the standard Bentayga, the Bentayga Hybrid adopts a new-look front end with a larger grille, LED matrix headlights and wider wings, while elliptical brake lights inspired by the brand's Continental GT coupé and a repositioned numberplate distinguish the rear end from that of its predecessor.

Updates to the cabin are centred around the infotainment system, which forgoes the outgoing model's button-heavy arrangement for a predominantly touch-sensitive set-up with a 10.9in high-resolution central display and wireless Apple CarPlay and Android Auto equipped as standard.

USB-C ports and wireless phone chargers are also now standard-fit, while the My Bentley connectivity services function via an inbuilt SIM card so can be used without a phone connected. 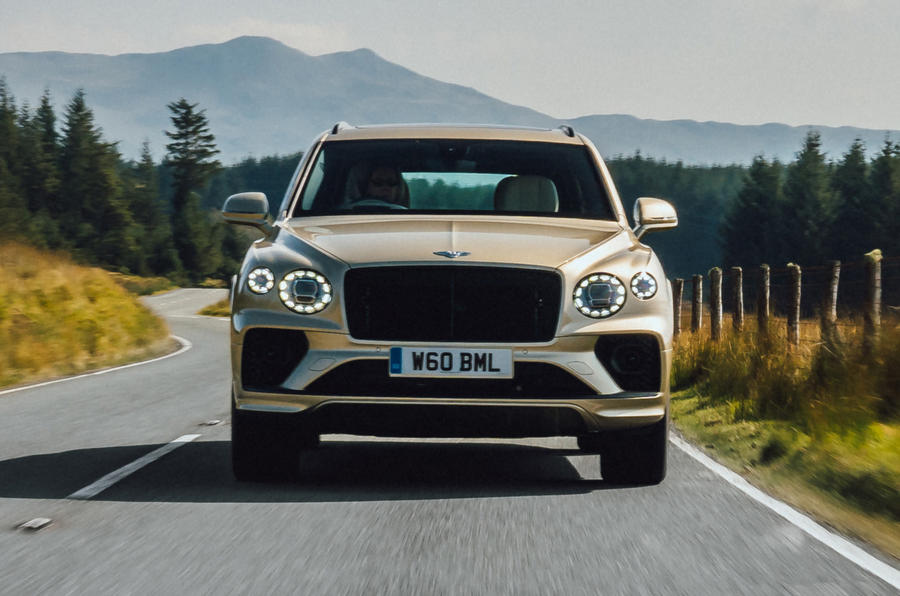 The new Bentayga Hybrid takes its power from the same petrol-electric powertrain as its predecessor, mating a 3.0-litre twin-turbocharged petrol V6 with a 126bhp electric motor for combined outputs of 443bhp and 516lb ft.

The 17.6kWh lithium battery pack is carried over, too, giving a claimed NEDC electric-only range of 31 miles, although this will likely be closer to 24 miles on the WLTP cycle.

Bentley claims more than 90% of current Bentayga Hybrid owners use their car "on a daily basis or several times a week" and around half consistently drive less than 30 miles at a time. Based on these statistics, the majority of journeys, Bentley said, "can be achieved completely in electric-only".

The battery can be fully charged in two and a half hours at speeds of up to 7.2kWh and is topped up via regenerative braking in EV and Hybrid modes. The Bentayga's 'Hybrid Efficiency Navigation' system can automatically switch between combustion and electric power at different stages of a planned route for maximum efficiency, and the accelerator pedal will vibrate to encourage the driver to coast towards junctions for optimal regeneration.

EV mode is activated automatically on start-up, but the Bentayga Hybrid can also be driven exclusively using the petrol motor in Hold mode. Performance figures have yet to be confirmed, but the updated Hybrid should match the previous car's 5.2sec 0-62mph time and 158mph top speed, as well as its official 80.7mpg economy rating and CO2 emissions of 79g/km.

The updated Bentayga Hybrid is set to arrive in dealerships in summer 2021. It can be expected to command a slight premium over the outgoing car's £130,500 starting price.

Still makes me laugh that you pay for 150 hours of hand stitching the leather and the end result is less neat than a £6K Dacia seat done by a machine in a few minutes!!  Once again, how do you define quality?  It's different for every person.

May turn out to be the heaviest five seater ever.

Seriously tacky, stitching "first edition" into the seats is something that just didnt need doing, and its still a very expensive VW.