Just 12 examples of the sleek, 650bhp Bacalar will be made to start Bentley’s new era of coachbuilt ultra-luxury. We drive the show car
Share
Open gallery
Close
Share story

Heading into Madgwick, there’s a sheen of rain on the Bacalar’s windscreen and conditions are definitely wet rather than merely damp. Goodwood’s first corner is a place of frequent high-speed heroism, although rarely in pre-production one-offs. The sodden conditions have already brought to mind Kenny Bräck’s opposite-lock heroics here in a Ford GT40 at the 2013 Revival in similar conditions, but even Bräck didn’t get to see such an unlikely speedometer number: the Bacalar’s digital instrument pack reports that the car is doing a bracing 170mph well before the first apex.

It’s not, of course. The instruments are playing a video loop vastly more exciting than the reality of this respectful rumble through the rain in a roofless seven-figure prototype. This Bacalar was built to be on a motor show stand rather than a race track, to introduce the idea of a Mulliner-built limited-run roadster, not to demonstrate what the finished car will be capable of. The three gauges in the centre of the dashboard are non-functional, needles pointing straight up. When I get into the car, my instinctive attempt to adjust the temperature is also in vain: the rotary controllers don’t do anything. Similarly, the windows don’t go up and the seatbelts are merely decorative. At least the wipers work.

So it’s not representative of the finished car and certainly not able to demonstrate Bentley’s claims that the Bacalar will be the fastest open-topped road car in its history. Yet it is a fascinating insight into the company’s view of the future of ultra-luxury: a return to the coachbuilding of an earlier era. 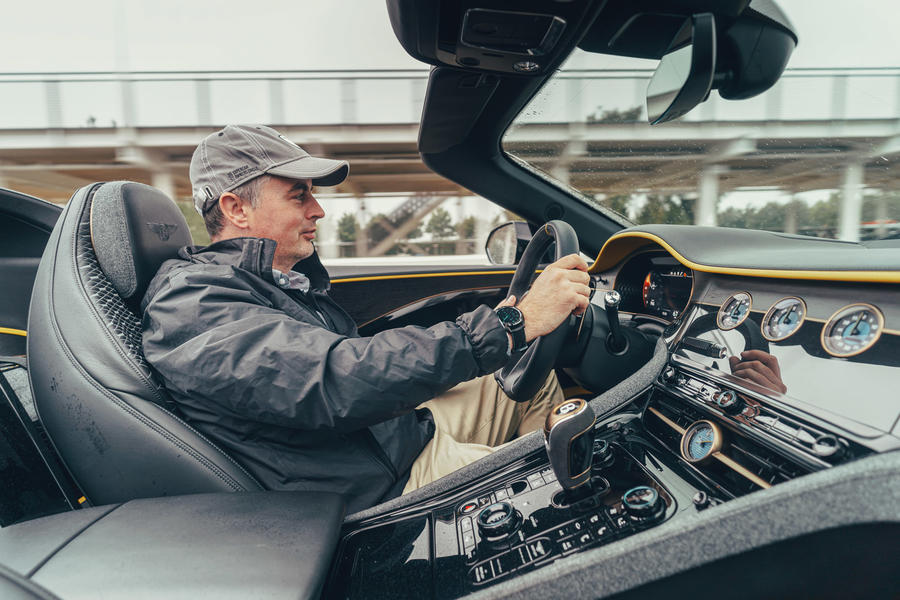 Beneath its radical exterior, the Bacalar is effectively a Continental GT convertible, sharing that car’s substructure and W12 powertrain. All external bodywork has been changed, with a combination of carbonfibre and aluminium panels, and Bentley has decided to swallow the considerable cost of creating bespoke light units rather than try to adopt those of the base car. The company had no difficulty selling out the limited run of 12 cars before the car had even been announced, despite a £1.8 million price (after taxes) that makes it more than 10 times as expensive than the car on which it is based.

Even under grey skies, the Bacalar looks stunning. Bentley’s head of colour and trim, Maria Mulder, is on hand to talk me around the car. She says the company normally uses the outside viewing garden of the Seat studio in Barcelona to sign-off on paint finishes and make sure they will work in brighter climates – Crewe can be a bit gloomy, apparently – but the show car’s Yellow Flame hue looks stunning in the drizzle. It contains ash made from rice husks for an ethically homologated metallic effect, and up close it looks almost like a flowing liquid. The absence of any kind of a roof is more of an issue, given the persistent rain. I’m concerned for the beautiful quilted seats, each one of which has more than 148,000 individual stitches, and the wool cloth facings. (The riverwood dashboard, made from timber recovered from 5000-year-old peat bogs, must be already acclimatised.) But Mulder says all trim materials have been chosen to meet stringent Volkswagen Group standards for both durability and short-term water resistance. “We can’t sell somebody a car that won’t withstand a shower,” she says.Apparently, it’s why Bentley doesn’t offer the softest aniline leather in the Continental GTC.

Of course, Bacalar buyers have something close to free choice when it comes to colours and trim materials. Mulder has been leading the online specification sessions. “Some buyers have ended up with very different choices than the ones they started with or perhaps thought they would make,” she says. 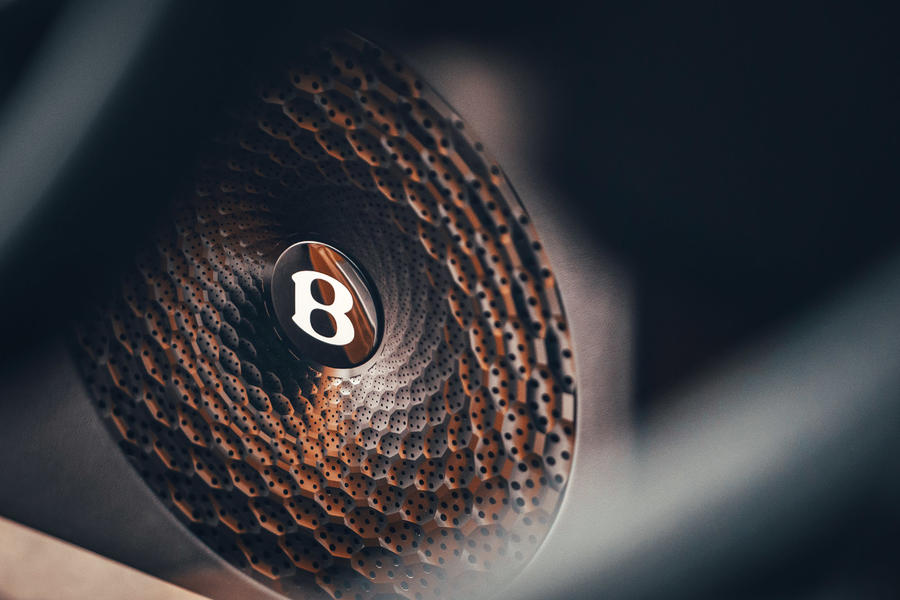 If a buyer wanted to choose a less tough material, they could do, says Mulder. Anyone doing so will have to sign a form saying they take on the risk of discolouration. But there’s no way to make changes that would have a detrimental effect on safety or the Bacalar’s core functionality. One customer has asked for a wooden-rimmed steering wheel, something that Bentley’s engineers are still struggling to deliver given the amount of electronics within the boss.

My driving experience at Goodwood is limited but, even at a gentle pace, the fundamental appeal of the Bacalar is obvious. Forget the claims of a 3.5sec 0-60mph time and ability to go past 200mph: I suspect very few owners will experience either of those statistics more than once, especially given how breezy the cabin gets at less than a quarter of the intended top speed.

The Bacalar is much happier as a cruiser, one that is going to be driven on the muscular mid-range of the wuffly 6.0-litre W12 engine. It will certainly be up for travelling faster. The 650bhp engine will appreciate harder use and Bentley’s dual-clutch transmission is one the quickest and cleanest-shifting in this part of the market. GTC underpinnings also mean the Bacalar shares the same dynamic-sharpening tech, including air springs and 48V active anti-roll. But it definitely feels like a car that will be better appreciated at lower speeds, not least because it will make it easier to see all the jealous glances.

The Bacalar is the first modern coachbuilt Bentley, but we’re promised it won’t be the last. 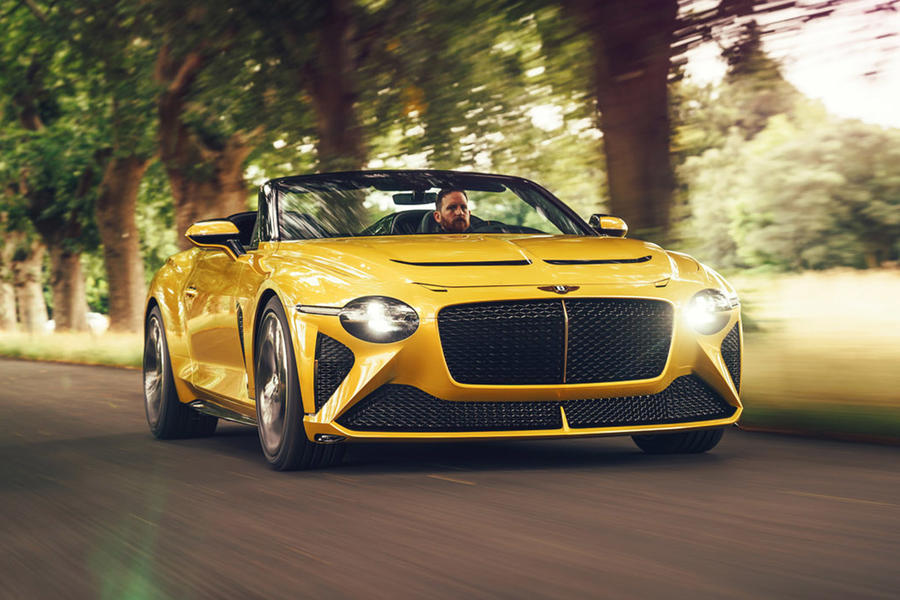 Mulliner boss Tim Hannig says the Bacalar represents a deliberately cautious start. “We’ve probably been conservative on numbers to make sure this is a success,” he says. “We’re in this for the long term and we need this to be sustainable.”

His division is going to play an increasing role in delivering Bentley’s vision of future luxury, but also increased revenue. Some of that will come from special editions of the regular line-up, more bespoke options and projects like the ‘continuation’ Blower. But cars like the Bacalar are likely to grab the biggest headlines, even if build numbers never rise too high.

“When you increase volumes, people’s excitement goes away,” Hannig says. “I don’t think we’ll ever get to 150, let’s say.”

What’s next? Hannig isn’t saying, unsurprisingly: “There is never going to be any shortage of ideas… But we absolutely are not planning to do one and then stop. This is a very serious start into a forgotten niche of the market.”

Bentley's coachbuilding arm Mulliner to ramp up with ultra-exclusive model

...to assume 12 former Max Power readers have now sold enough crack to be able to afford one of these I'd have thought?