BACK TO ALL NEWS
Currently reading: Bentley’s first EV kicks off brand’s bold reinvention
UP NEXT
Ford backs call for European ban on new ICE cars from 2035

Bentley’s debut electric vehicle, due in 2025, will be one of the first cars to use a new cutting-edge Audi-developed luxury car platform – and it will spearhead a series of radical new models that will expand Bentley’s range into new market segments.

The Crewe manufacturer, owned by the Volkswagen Group, has committed to offering only battery-electric vehicles (BEVs) from 2030 onwards and it plans to meet that deadline by rolling out a family of new EVs in the second half of this decade.

The first EV will take the form of a high-riding saloon. It will be based on a bespoke VW Group architecture, which is being developed by Project Artemis, an Audi-led initiative to develop an advanced EV platform.

Bentley EVs to target new sectors of the market

Bentley bosses are not expecting a major leap in battery technology any time soon so the firm’s first electric models will be designed to match the range and weight limitations of current systems with Bentley’s luxury positioning. The result will be models that differ significantly from Bentley’s current line-up.

Bentley chairman Adrian Hallmark told Autocar the firm has yet to decide if future electric models would take on the nameplate and lineage of existing combustion-engined models. But he added: “Our position is to look at customers and segments. As well as moving to electric, we’re going to adapt our product range because the world is changing. 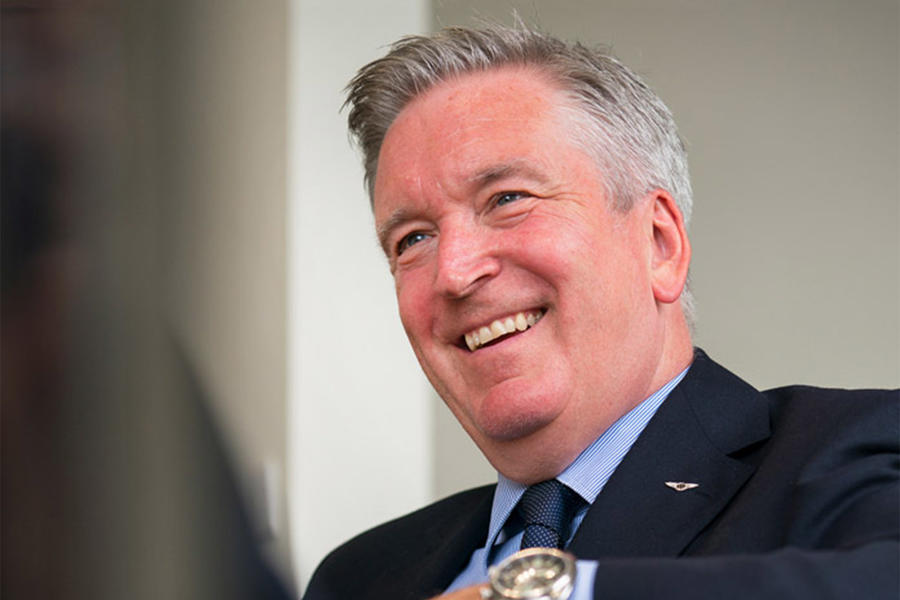 “Our product format, size and naming need to fit the product character and strategy based around customers and where we see those segments going. We love our current names. Maybe they’ll continue. But we’ll always follow customers, segments and values and find a name that fits.”

Although Hallmark said Bentley doesn’t foresee a “step change” in BEV technology, he suggested continuous improvements will help the firm to meet its range targets. From 2026 onwards, all new Bentley models will be either fully electric or plug-in hybrid, with the latter allowing existing models to continue.

“By 2025, we’re predicting 110kWh to 120kWh batteries will be available, which starts to put bigger cars in a position where you can get 400-500km [250-310 miles] range,” said Hallmark. “You need 150kWh-plus to get a full-size SUV to have the equivalent performance of a combustion-engined vehicle, which is why hybrids are so important in playing a part for bigger vehicles in the next five to 10 years.

This suggests Bentley is unlikely to offer a traditional grand tourer such as the Continental or Flying Spur in its initial EV range, leaving electric versions of such models until battery technology develops. 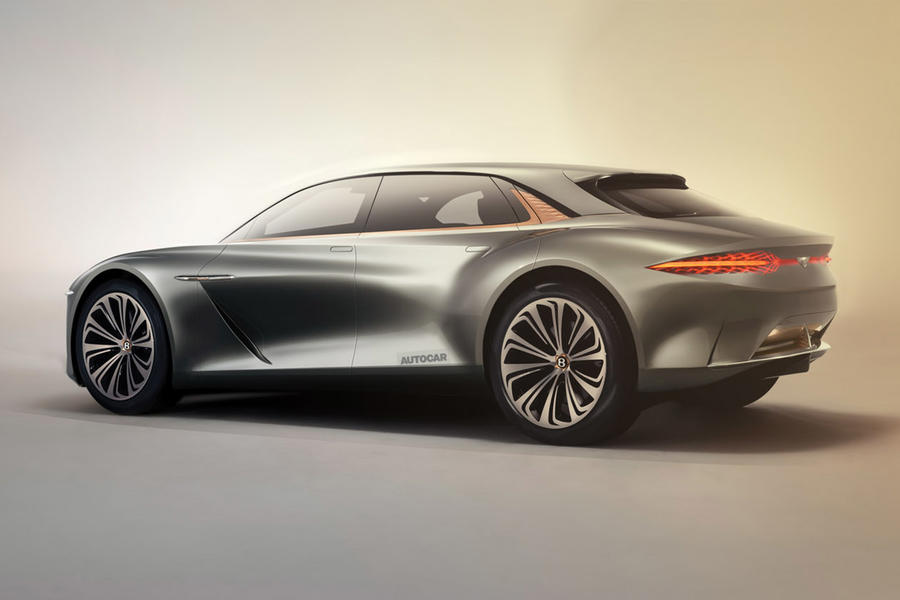 Instead, the focus will be on crossover-style cars that will complement the current range, sitting in a similar price bracket but with a different focus to suit the benefits of EVs – in a similar vein to, for example, the Porsche Panamera and Taycan. In that sense, they may be considered replacement vehicles, but for some Bentley owners they will also be offered as complementary models, as well as appealing to new customers to the brand.

Hallmark said he expects customer demand for EVs to undergo a step change rather than grow incrementally, with a likely “inflection point” globally around 2030. He also suggested that Bentley’s initial electric models are likely to complement the existing combustion-engined range, noting that “for our customers, [a Bentley EV] won’t be their only car. They will have charging capability at home, work and places they frequent, and as that infrastructure builds, it will become more usable. The characteristics of a BEV are so aligned to Bentley, so why wouldn’t we?”

The first EV to be produced in Crewe will showcase Bentley broadening into new markets. As previously reported by Autocar, that model is set to adopt a saloon bodystyle but, similar to a Jaguar I-Pace, will stand slightly taller to accommodate the underfloor batteries. However, it won’t push up to the extent of a traditional SUV. It will have styling inspired by the EXP 100 GT concept and its body will be honed for aerodynamic efficiency to optimise range.

Work is still in the conceptual phase, but Bentley has chosen that development path because it best hides the mass of the batteries.

That 2025 car will be followed by what Bentley engineering boss Matthias Rabe called “a family of EVs” based on a “totally new platform”. Although Bentley has refused to comment, this refers to the new architecture being developed by sibling firm Audi’s Project Artemis.

The project – headed by Alex Hitzinger, former boss of Porsche’s endurance racing programme – is being run as a responsive motorsport team-style unit with considerable freedom. Its goal is to quickly develop a cutting-edge EV architecture that enables high levels of semi-autonomous technology and connectivity and the VW Group is investing heavily in software systems for the new platform. The architecture will first be used for a new flagship Audi, likely badged the A9 and due in 2024. 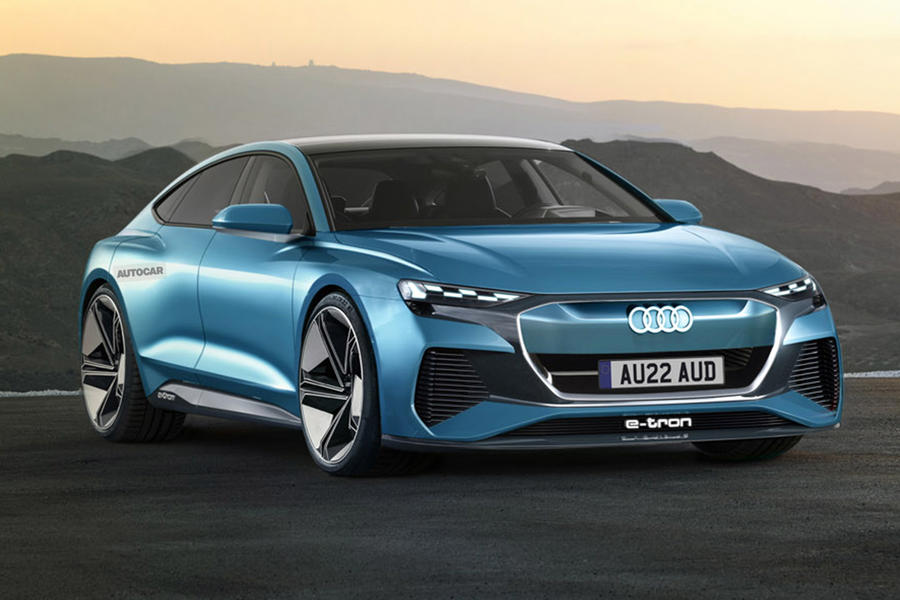 Bentley will take the Artemis architecture and modify key elements to ensure it meets the brand’s positioning and needs, as it does with other models based on VW Group platforms.

Hallmark said the firm’s EVs will “be on a group architecture which is a collection of core components, with a Bentley sub-architecture”.

Although Hallmark refused to confirm that Bentley will use the Artemis platform, he said the firm is “definitely going to be beneficiaries of early inclusion in the development of that new architecture. All of our needs are incorporated in the base engineering rather than coming to the party late and retro-changing it. But in terms of what it’s called, what it’s on and who’s doing what, I wouldn’t comment on that.”

Hallmark noted that the higher average cost of luxury vehicles made the economics of selling an EV profitably easier for Bentley than mass-market brands. He said the biggest challenge with the new model remains the limitations of battery range.

“Aerodynamics, weight and rolling resistance are far more critical on battery-electric vehicles than combustion-engined ones on the range,” he said. “So we’ve got to make the car lighter net of the battery, and we’ve got to make it more slippery, so it will be a very, very different proposition.”

Speaking about progress on the 2025 EV, Hallmark added: “We’re not frozen in terms of the bodystyle and so on. But we know the technology we’re going to be using and the capabilities of that technology. We know the dimensions and the hard points that we’ve got to work with, but that’s only the basic elements, maybe 20% of the work.

“We’ve also worked on a lot of different options in terms of design of the first car, and over the next three to six months we’ll formalise those, lock and load and be ready to go. But we’re still in that searching phase, and not in the implementation phase yet.”

Hallmark also addressed reports that Audi could take control of Bentley as part of a VW Group reorganisation. He noted that Bentley already has close links with Audi and Porsche due to the platforms used for various models and said: “The question is who owns that new electric architecture, and who is it best for us to align with? It’s not a big question and it’s more operational than anything else. It’s not a threat.”

Bentley's first EV to be high-riding saloon in 2025

Hilarious. That's a lot of money for a VW.

Do they not know about the Lucid Air? It has 517miles of range with a 113kWh battery

"You need 150kWh-plus to get a full-size SUV to have the equivalent performance of a combustion-engined vehicle, which is why hybrids are so important in playing a part for bigger vehicles in the next five to 10 years."

You can reserve a 400 mile range full-size Rivian SUV with a 180kWh battery today for delivery next year, but you will need to wait until 2030 to buy a Bentley SUV you can drive to the city centre?

The VW CEO seems to be all in on EVs, but not everyone in the company looks to be on board.

Lucid air dont make a car at the moment, only predictions since it was announced in 2016.   Theres also no Rivian suv only promises.  Besides who want to drive a straight 500 miles without stopping for 30 minutes, 300 miles with a recharge time of 30 mins is plenty for 99.9 percent of the market

Totally agree about there being no need for 500 miles of range, its just for bragging rights.

As for Ririan and Lucid, they are both well funded with fully developed vehicles and are currently in the process of setting up manufacturing in their factories.

But, even if these vehicles do not materialise, the range numbers quoted by the Bentley Chairman are bested by the Tesla Model S and Model X even today.

Tesla started all this stuff. Amazing

Your right, but as seen with the Porsche Taycan and the Audi e-tron GT, matching Tesla on range is not and easy nut to crack. If Rivian and Lucid have found ways to meet and/or exceed Tesla on those points and do so consistently in the real world, way to go, but not everyone is there yet. It might be better to speak in public about modest range, while in private be working to rang out as much range as they can get from their batteries. I wouldn't be surprised if they are waiting for the products from Lucid and Rivian to hit the market, so that they can break them down and see what they can do to improve their products with efficiency! All that said, I appreciate their honesty in admitting that they are still going to do more with ICE, but are now taking BEV's seriously and not treating them as an after thought! That they are on the ground floor with their other brands, so that they can produce a BEV that started life as an actual Bentley.

The Tesla range is very similar in real life when you compare the Model X and the Audi or Jag. Tesla fanboys driving at 56mph in the iside lane just to prove longer range may get better figures, but the reality is that electric drivetrains all have very similar efficiency ratings and you cannot get something for nothing. You are not going to get 400 miles of range from a Tesla model X being driven normally.

Complete BS.  Give me 500 miles and I'll buy an EV tommorrow.  My diesel does 600 miles on a tank, allowing me to drive to Preston and back without stopping at p**** poor inflated services