BACK TO ALL NEWS
Currently reading: Audi A4 Allroad introduces new quattro Ultra four-wheel-drive
UP NEXT
Fisker goes radical with Pear EV SUV

Audi is bringing its latest quattro Ultra four-wheel drive system to the UK market in April with the Audi A4 Allroad, before the system is rolled out in other models in the coming months.

The crossover is the first right-hand-drive model to feature Audi’s latest system, which is described as a major engineering overhaul as part of the car maker’s new philosophy of using ‘predictive’ technology to reduce fuel consumption. Models with Audi’s 248bhp 2.0 TFSI engine will be the first engine to adopt the new technology; sales start in April, with first deliveries expected this June.

The car’s revised set-up is based on the original quattro system that uses longitudinally mounted engines. Audi engineers have fitted an electronic clutch to the rear of the gearbox to allow drive to the rear wheels to be disengaged in fractions of a second. In order to further reduce drag, a second electronic clutch is fitted to the rear differential, allowing the rear wheels to spin freely when disengaged rather than turning the prop-shaft and thereby causing mechanical drag and increasing fuel consumption.

Audi claims this new quattro Ultra transmission will save an average of about 4mpg compared with today’s permanently engaged quattro setup. It is also 4kg lighter than the current system.

Audi says the control system for quattro Ultra is “networked with a number of other control units”. Every 10 milliseconds, the quattro controller “acquires and analyses a wide variety of data, including steering angle, lateral and longitudinal acceleration and engine torque levels”, among many other things.

It can, for example, calculate the point at which a front tyre is approaching the limit of its grip and within 0.5sec activate the all-wheel drive system. Quattro Ultra also uses information from the car’s electronic stability control and an individual’s own driving style. It even takes into account the external temperature and local weather conditions. 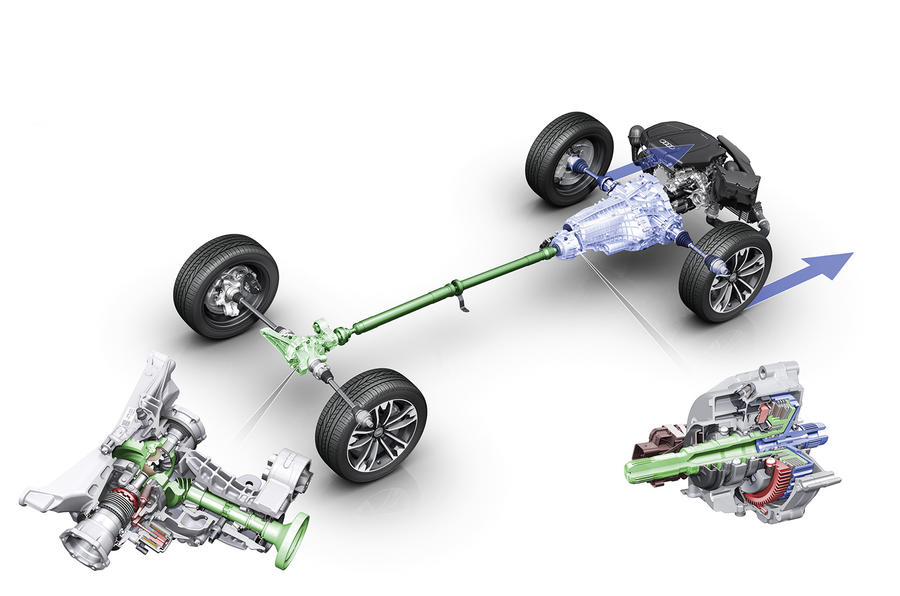 The Audi A4 Allroad has all the benefits of an A4 Avant, with none of the drawbacks of a full SUV. It makes a pretty convincing case for itself.

The new Ultra system offers the driver different command settings for the four-wheel drive system. Auto mode allows the car’s management systems to decide when and where to activate all-wheel drive. In Dynamic mode, more power is sent to the rear wheels “more quickly”.

After the new A4 Allroad quattro, the system will then be rolled out on all longitudinally engined Audis that are equipped with either a manual or S tronic dual-clutch automatic gearbox.The highest-powered quattro models will be offered with a torque-convertor automatic and conventional permanent all-wheel drive.

Audi says it has built around seven million cars equipped with the longitudinally mounted quattro transmission, which made its debut on the iconic 1980 Ur-Quattro coupé.

Including models with the part-time quattro system used by transversely engined Audis, more than 40% of all Audi models sold in 2015 had all-wheel-drive. The biggest-selling all-wheel-drive Audi was the Q5 SUV, with 210,000 units sold.

This is a real backwards step for Audi and I don't really understand it. I have owned a fair few torsen and haldex quattros and torsen is much much better at start off and in low grip situations such as snow and ice. So why ruin torsen by making it like haldex.

Come on Audi sort this out. At the very least make it optional rather than standard fit.

Quote "
Audi says it has built around seven million cars equipped with the longitudinally mounted quattro transmission, which made its debut on the iconic 1980 Ur-Quattro coupé.Unquote........I was the first person to have this model in Greece when I lived there (and did my serious rallying there) That engine of course was a 5 pot - something which I have always believed in - power of a 6 economy of a four and a unique sound track. I thumped that car over 150k without the slightest hitch. Todays models are fabulous inside - a delight to sit inside and I really do hanker after this model. It does everything and looks the part rather than a stupid ugly X6 which still doesnt know what it wants to be