BACK TO ALL NEWS
Currently reading: Audi A3 Sportback e-tron plug-in hybrid to arrive in 2014
UP NEXT
Ultimate EV guide: Every electric car rated

Audi has revealed that its new A3 Sportback e-tron plug-in hybrid will arrive in the UK market by mid-2014.

Designed to offer the benefits of an electric vehicle with unrestricted range, the A3 Sportback e-tron features a conventional petrol engine coupled to an electric motor.

Its 1.4-litre TFSI petrol engine delivers 148bhp and 184lb ft; the electric motor, which is integrated into the car's six-speed dual-clutch automatic transmission, can output 101bhp and 243lb ft.

The A3 can be charged from a domestic socket in around four hours. A faster dedicated charging point, capable of completing the same process in two hours, will be available for less than £1,000.

With an 8.8kWh battery storing current for the electric motor, the A3 Sportback e-tron has a potential all-electric range of 31 miles.

Total range, if using both petrol and electric power sources, is stated to be in the region of 553 miles. As the A3 e-tron is a plug-in hybrid, you can also simply refuel the car and continue on your way, even if the drive battery is totally flat.

A variety of powertrain modes will be offered as standard, including a 'hold' function that saves the battery for when you want to drive on electric power alone, for example in city centres.

It's expected that the Audi A3 e-tron will take its place in the range with its own distinct trim level, which is reputed to offer a decent amount of equipment and various customisation options.

The manufacturer also states that the servicing regime will be comparable to that of a standard A3.

An Audi engineer said "The A3 e-tron will be the benchmark car for plug-in hybrids." 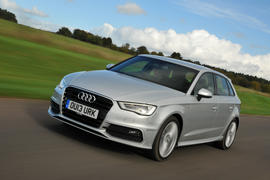 The Audi A3 Sportback offers the same ownership virtues as the three-door car, but fails to address the small Audi's dynamic shortcomings

Good news. One of the leading car manufacturers in the world finally came to the mass production of hybrid cars. Today in this segment of the competition is great, but fans of the Group Company dovno waiting for this moment. The car really look forward to.

And this is what they come up with?  Instead of using the electric motor to simplify the drive train they have just added it on to a conventional, highly complex one.  Looks like the huge gulf between VAG and Toyota reliability might widen even more.  It is like they are addicted to complexity.

Toyota way maore reliable than VAG? No ways! Just look at all their recent recalls!

Well done VW and we can look forward to the electric/hybrid golf.

This will throw the Audi and Electric/hybrid haters in to a right old tis!

Technically it's 188mpg for the first 38 miles (31 miles in EV then 7 miles with the engine on) but even with the battery depleted it's combined number is still ~62mpg which isn't bad!

Why are these cars so darned expensive?,if this tech gives you all the Cake to eat, so to speak,then, why isn't it offered from the lowest spec?,surely, we all deserve to save some cash,save on fuel bills,Road Tax,insurance etc,not to mention lower Co'2 which if more could afford it, would be even better,or, is the fact,like most car makers,they can charge more,not many people with a start price of £27K in there pockets just now,lots of people in Mortgage problems,out of work etc,so , saying £27K is a bargain,maybe a bargain for the have's....?

Given the recent Le Mans success...

... you'd have to guess Audi deemed this the most appropriate route to market to address some of the shortcomings of the alternatives.

As Audi like others are constrained by cost and limits in currently available technology I don't think it's a bad first stab. S3 matching torque figures, decent range, very respectable CO2 figures and MPG, married together in a body shell that most people wouldn't feel too embarrased to be seen in.

It was never going to change the face of hybrid motoring, but on balance there are less attractive options out there.

It will get £5k grant as it

It will get £5k grant as it can do 30miles under electric power.

Taking it to the same price roughly as an A3 2.0TDI S-line tronic. So its good value with the grant. Free tax disc too.

...after multiple miscarriages, Audi brings us a car that could be just right for many a buyers.

A clarification whether the price quoted includes the government £5,000 grant will be welcome.