Aston Martin is putting the finishing touches to a more powerful version of its DB9-based Rapide saloon. It is likely to adopt the DBS’s 510bhp engine and be offered with a suite of minor body changes for the 2012 model year.

The four-door, which will continue to be sold also as a ‘base’ version with 470bhp, and at prices starting around £145,000, is currently being tested at the Nürburgring with light disguising on its bonnet, bumpers and boot.

Aston engineers are believed to have concluded that the Rapide chassis and brakes can easily cope with the extra power. The testing is to verify that its cooling system is up to the job.

Sales of the Rapide, built by Magna Steyr in Graz, Austria, have been boosted recently by strong demand from China. The car was launched in Beijing a year ago and has become the most popular Aston model in China, taking 60 per cent of demand.

The Gaydon-based firm has been  air-freighting Astons to China to cope with that demand, and is likely to sell around 500 cars a year there in future, around 300 of which should be Rapides. 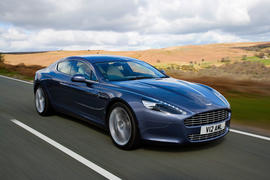