The bespoke project, commissioned by a European client, is designed to "pay homage to Zagato’s artistic, Italian coachbuilding tradition on the canvas of a shooting brake body shape".

Zagato's shooting brake was revealed at the Chantilly Arts & Elegance Concours D'Elegance. The one-off Aston Martin is said to feature "cutting-edge" styling cues that "create surprise and fascination with a new shape."

Aston Martin and Zagato have collaborated since 1960. The first Zagato Aston, the DB4 GT Zagato, was launched at the London motor show in October 1960; other cars produced since then include the Vantage-based V12 Zagato.

This year Zagato celebrate 95 years of continual activity, three generations of Zagato family ownership and a host of dramatic and innovative designs. The company has also recently launched the Lamborghini 5-95 Zagato.

Coachbuilding companies and coachbuilt cars have seen somewhat of a revival recently, thanks to the increasing demand for more exclusive and heavily customised cars.

So significant is the interest that even major manufacturers, such as Bentley, are considering launching special divisions to meet the demand. 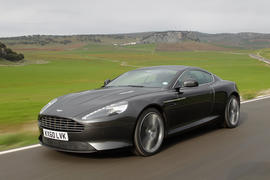 The Aston Martin Virage is a very good car, but it could have been a great one

10 September 2014
Not entirely, but almost entirely.

Not exactly the best looking

10 September 2014
Not exactly the best looking car in the world, but Zagato have done a far better job at styling Astons than Aston's own boring efforts.

10 September 2014
Lovely side profile. Perhaps the designer handed the front and rear details to the office junior though.
Personally I think it would be more convincing as an Espada rebirth. That I could live with. V12 and the Zeitgeist can go and disappear up its.....

Wow love them all

10 September 2014
...the Coupe much more than this. That was lovely but this just doesn't seem to really work. Horrible shut lines round the boot lid too.

Cool to be different...

10 September 2014
This is classy and almost timeless, to the degree that it is hard to put an age on this design, some cues are from the 60s, some from the 80s and 90s, aspects are also contemporary and forward looking. This is the route the Jaguar XE should have gone down, although it clearly retains the flamboyance of a Zagato, the intelligent proportions and use of space are great, especially the tailgate and rear light arrangement. The fuel cap even looks good.

10 September 2014
That's what I see in these cars. Not necessarily a bad thing, but they don't *quite* work to my eyes. Close, but no cigar. I guess the point is that they are unique and totally exclusive, which is what counts in the hyper-market (I don't mean Carrefour).....

an Aston shooting brake could be gorgeous...

11 September 2014
but not this one.
The rear end is all wrong and doesn't have any AM cues.
I was expecting a more upright rear backlight/hatch like a true shooting brake. The Ferrari FF did it right.
I am disappointed.

11 September 2014
If you have the cash,if you can get it built your way,then why not?,it isn't ugly as some have said,the person has taste,and to coin an old saying.......there money,there choice.

1 November 2014
Let's face it: the present styling that has been underway for more than two decades (since the DB7) gets a bit stale. Doesn't help to put the cluttered aero stuff I noticed on the DB9. Aston needs something more drastic, considering the difficulties it experiences. Zagato's concept may help in this respect.